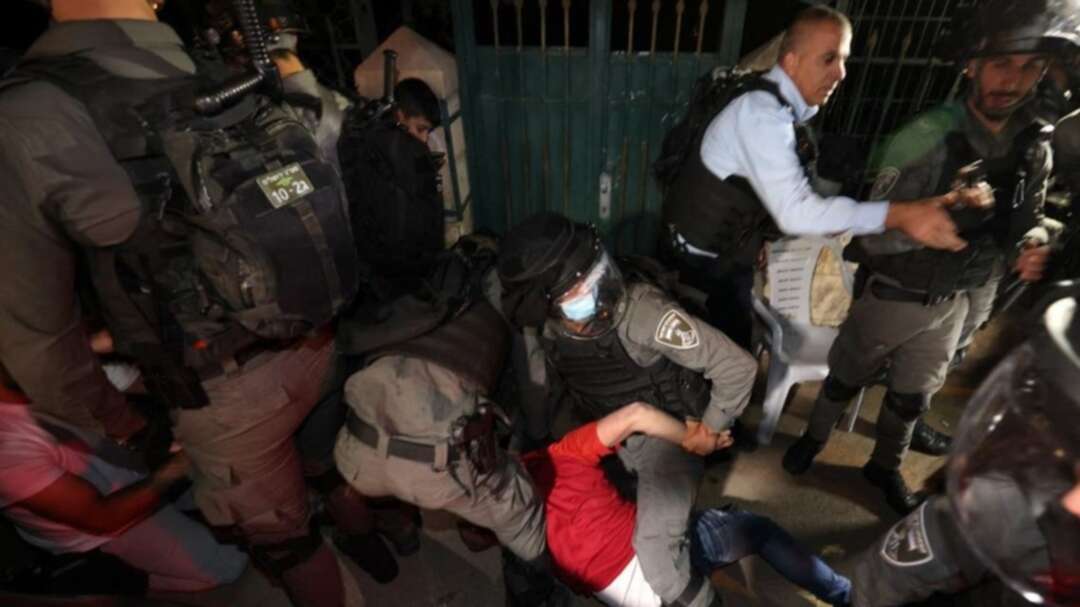 A Palestinian protester is arrested by Israeli security forces, during a demonstration as Palestinian families face eviction, part of an ongoing effort by Jewish Israelis to take control of homes in the Sheikh Jarrah neighbourhood of occupied east Jerusalem, on May 5, 2021. (AFP)

US National Security Adviser Jake Sullivan on Sunday expressed “serious concerns” to his Israeli counterpart about violent clashes in Jerusalem sparked by planned evictions of Palestinians from East Jerusalem, the White House said in a statement.

New confrontations broke out between Palestinians and Israeli police in parts of East Jerusalem on Sunday, including in Sheikh Jarrah and outside the walled Old City, as well as in Haifa, a mixed Arab-Jewish city in northern Israel at the height of the Muslim holy month of Ramadan.

The clashes have been sparked by the planned evictions of several Palestinian families from the Sheikh Jarrah neighborhood in East Jerusalem, an area captured by Israel in a 1967 war.

Israel’s attorney-general secured a deferment on Sunday of an Israeli Supreme Court hearing on the evictions, a session that had threatened to stoke more violence in the holy city and heighten international concern.

“Mr. Sullivan also reiterated the US’ serious concerns about the potential evictions of Palestinian families from their homes in the Sheikh Jarrah neighborhood,” the White House statement said.

Sullivan and Ben-Shabbat “agreed that the launching of rocket attacks and incendiary balloons from Gaza towards Israel is unacceptable and must be condemned,” the White House added.

It said Sullivan also expressed the Biden administration’s commitment to Israel’s security and to supporting peace and stability throughout the Middle East and would remain fully engaged in the days ahead to promote calm in Jerusalem.