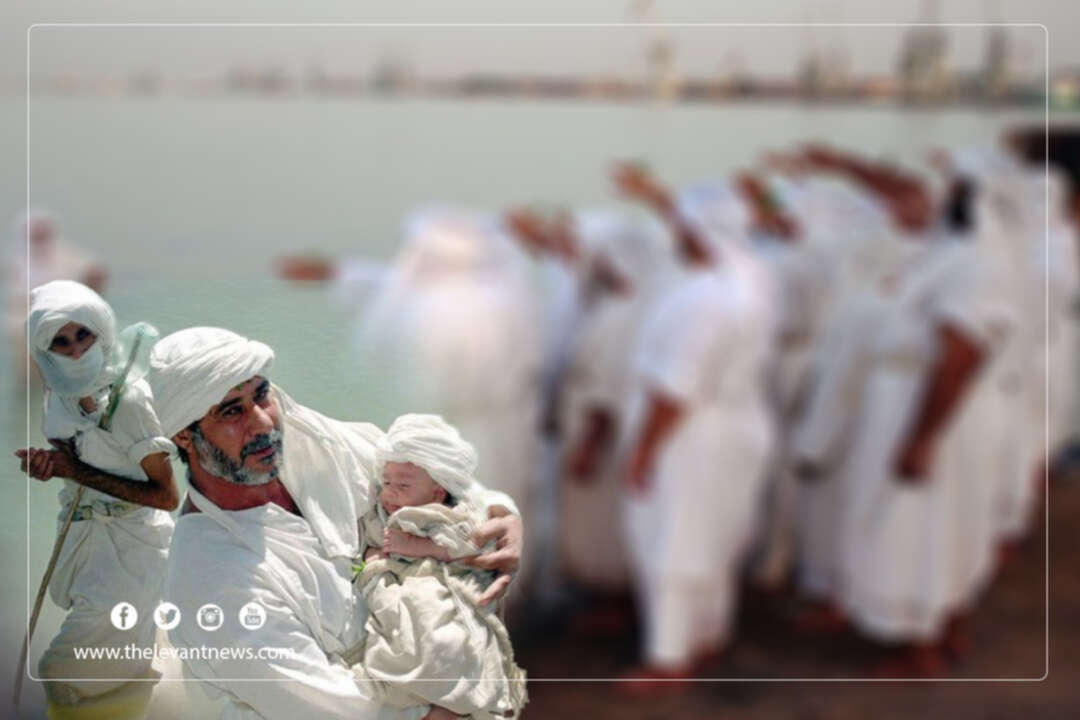 Mandai’esm is one of the oldest religions in Iran and Mesopotamia, it has deep roots in the human religious phenomena that denounced polytheism and conceded monotheism as its corner stone.

They are called “Alsabi’a” in south of Iraq, specifically in the province of “Misan”,  where they lived historically, in local dialect they are called “Alsaba”, that comes from the word “Saba” which means in the Mandaie language  “ he who dived in water, and got peptized in it,  and absorbed it’ features “.

The Mandias took river planes as homes in every country the lived in, north of Syria, south of Iraq, palatine and the Ahwaz in Iran. that could be explained by their core religious belief and religious practice, baptism in water, the main part of the ritual called “passing” which is practiced in many occasions, religious holydays, births and funerals.

Very rare information is available about the, weather about their religion or their cultural activities, modern studies also doesn’t give them enough attention, yet, Iraqi researcher Fawzi alsabar indicated in his book “the Mandai literature in ancient ages” that this religion was established between the 1st and 2ed center B.D, drawing this conclusion from comparative study of Mandai’s texts and gnostic ones.

What  interesting about Alsabat study is his assumption that the Mandais left a trace in the places they inhabited,  a cultural and artistic trace,  so he tried to remove the layers of secrecy that surrounded them, by researching the  Arabic texts and poem written before Islam, then he analyseed their symbolic and religious backgrounds that glorify the Mandai religion ,its rituals and its monotheistic ideas, he found traces of that in the poems of Zuhair ben abi Salma, and AL nabiga al zoubiane,

Mandaisem and Islam ..a mutual memory

Professor Ashraf Mansour of Alexandria university indicated in a conversation with him, that the Mandaie Sabia worship of stars and plants is a result of the ancient Kaldani since that was focused on astronomy and astrology. He adds to "levant": “ this scientific practice left very little trace to us when it disappeared, and what’s left of it, related to the effect of stars and planets on people, became superstitious for the Arabs,  but the effect of Sabias on Islam is major, that’s way the Coran tried to deal with the idea of worshiping planets and stars  by conceding them proofs of gods power and will , also, Coran is filled with examples where Alah swears by the name of stars and planets, All of these are astronomical phenomenas that the Arabs saw as magic and astrology, so the Coran response was to identify stars and planets as protectors of the skies and angels from Saitans  and other genies who try to listen to what’s happening in the sky and transmit the future to earth”. He also adds that their believes are considered in coran as legitimate religion like the Jews and Christians, declaring that “Unquestionably,

The constitution of Islamic republic of Iran dosn’t constitute the exitance of the Mandaie religion, it only concider Muslims, sunies and shieas in addition to Zarathustrans, Christians and Jews, the mandaies are excluded, religiously and nationally.

At the other hand, many journalistic reports declares the decrease of the mandaies numbers, suggesting that there is only 5000 citizens, but these statistics are old, and not updated, they go back to the years between 1997 and 2004, but the UNHCR report in 1997, clears that they have counted about ten thousand individuals that are mandaies, plus, the international report of the freedom of religion in Iran that was published in Washington in 2004, says that their numbers are between 5 and 10 thousand.

The mandaies are discriminated against in Iran, publicly, they are banned from wearing their clerical clothes, -white cloak-, they are also banned from holding any official office in the state, they also have no representative in parliament or government.

These oppressive and marginalizing conditions that the Mandaies suffered after the Iranian revolution in 1979, has abolished their chances of having education, that led many of them to only finish middle school, forcing  them to take different handcrafts as profession, unlike the time of the Shah ruling, where they were allowed to continue their higher education, but they also faced the same discrimination regarding parliamentary representation and the right to practice religious rituals, but they were allowed to in role in official jobs.

Mandais weren’t allowed to work in many important sectors, like education, health care and military, that was mentioned clearly in the law established in 1985, that prohibit them from participating in civil life and its activities.

According the Islamic republic constitution: yazidies, zarathoustrians, Jews and christens are the only recognized minorities”, excluding mandaies, for example, in universities each applicant application is examined socially and legally before admition, and when the intellegence discover that he is from a minority that is excluded, he is banned from entering the university .

This hostial treatment is empowered by the Khumini letter entitled “ liberating the mean”, in which he says that “jizya is collected from Jews and christens, how has a book, and those who have a book like doctrine, like magians, while others are either killed or have to convert to Islam“

Aram Jamal, a 32 years old Mandai who lives in Australia says that the oppression the Manaies faced in Iran had led to their departure from the country, the migrated to refuge countries.  plus, they only have very minor role in political life in Iran  and some practice some social activities related to the sect, like taking care of the poor and ill, yet, religious men are always kidnaped by security forces in addition to facing humiliation and discriminations,  like what we witnessed in  the 80es and 90es when the security forces kidnaped the grand master  “Alkinzi jabourt” many times for no apparent reason and without any charges.

He adds to "levant": “in April 20, a grand master named “Ashkanda fayz shafic” was arrested, he was born in Ahawz- Iraq in the late eighties, the reason for his arrest  was his participation in forming the “the mandi youth commits in the house of Manda”, which is a charity that takes care of the Ahwazi society, doesn’t  differentiate between one sect or another, and that made him very popular in the area.

Shima Mouhamed, a researcher in Irani affairs says that the mandaies are one for the most oppressed minorities in Iran, the republic’s constitution recognizes the Zarathustrians which has less followers that  mandie, who are not recognized in public record and they are not allowed to use their traditional names so they use Jewish and Christian names in order for their babies to be registered in official records.

She states to "levant" that their number has decreased from 60 thousand to 25, since many of them fled the country , she also indicates that the discrimination they face is represented by the absent of worshiping houses and the ban of their religious ceremonies, that led them to migrate to far places in the country side, so they can practice their religion.

The diversity in the Iranian nation contradicts with the structuer of the Islamic state, and the “wilahiat algaquih” theory with its khumini version as Mohamed saed al sayad stated.  Sayad the responsible of the international  center of the intellectual and ideological studies of Iran explains that  alwali al faquih is the higher power of all shia’s and Muslimas, and he enjoys wide political and religious power, and that excluded minorities and their cultural back grounds and leaders.

He says “excluding minorities constitutionally and banning them from high position in the state has established their victimhood and their deprivation from their rights as citizens in the state, they are seen as a threat to the stats identity, since the safawies times and after the Islamic revolution”

Another factor is added to the politics of discrimination is related to their religious statues, they are seen as infidels, along with Christians and Jews, from the point of view of the radical religious political elite of Iran after the revolution.

Sayad adds” If the Iranian state takes in consideration the international society and human right organization  when dealing with Jewish and Christian minorities. But   they show zero attention to the mandaies, since they are an international minority, and they as a group are closed and doesn’t have legal and mediatic resources to defend their cause”.