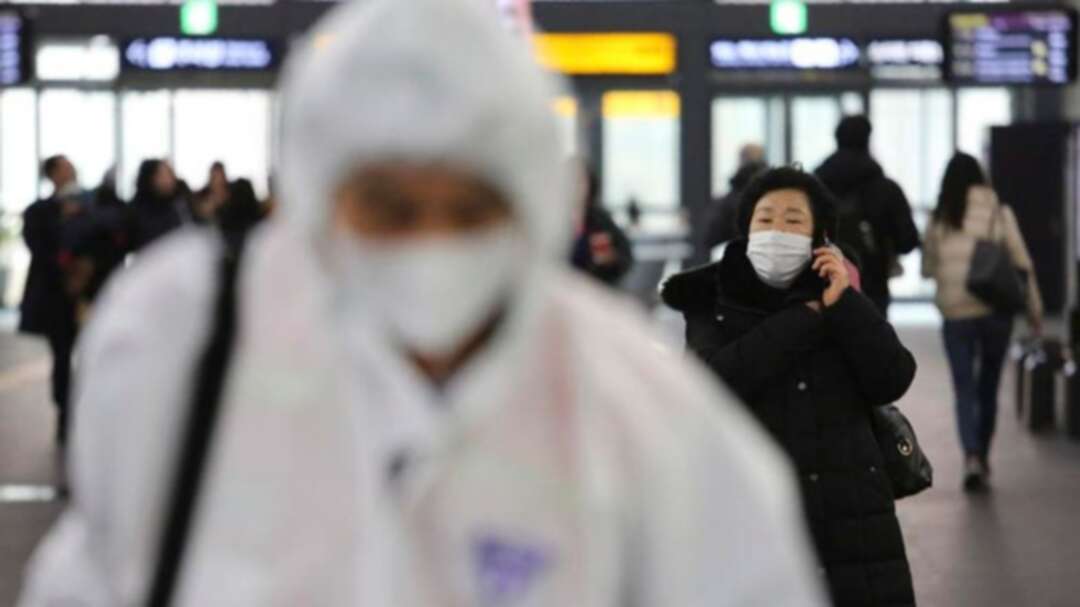 A woman wears a mask as an employee works to prevent a new coronavirus at Suseo Station in Seoul, South Korea. (AP)

A cluster of novel coronavirus infections centered on a cult church in the South Korean city of Daegu leaped to 39 cases Thursday, as the country’s total spiked for the second successive day.

Almost half the country’s patients are linked to a 61-year-old woman who is a member of the Daegu branch of the Shincheonji Church of Jesus, an entity often accused of being a cult.

She first developed a fever on February 10 but reportedly twice refused to be tested for the coronavirus because she had not recently traveled abroad, and attended at least four services before being diagnosed. 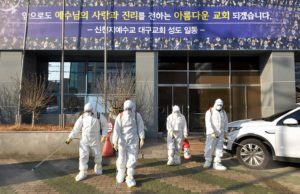 In this Wednesday, Feb. 19, 2020, photo, workers wearing protective gears spray disinfectant against the coronavirus in front of the Sincheonji Church of Jesus in Daegu, South Korea. (AP)

So far 37 other members of the church have been confirmed as infected.

Shincheonji claims that its founder Lee Man-hee has donned the mantle of Jesus Christ and will take 144,000 people with him to Heaven, body, and soul, on the Day of Judgement.

Daegu’s municipal government said there were 1,001 Shincheonji members in the city, all of whom had been asked to self-quarantine, with 90 of them currently showing symptoms.

Those who have symptoms “will be tested as soon as possible”, said Daegu mayor Kwon Young-jin, urging stronger action from the government in Seoul and calling the national response “inadequate.”

Shincheonji closed down all its facilities nationwide.

“We are deeply sorry that because of one of our members, who thought of her condition like a cold because she had not traveled abroad, led to many in our church being infected and thereby caused concern to the local community,” it said in a statement.

The Korea Centers for Disease Control and Prevention (KCDC) said in a statement that 31 new coronavirus cases had been confirmed nationwide, 23 of them in the cult cluster.

Until Tuesday, South Korea had only confirmed 31 infections, but it now has a total of 82. 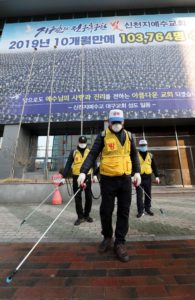 Korean staff disinfects the area outside the Shincheonji Church of Jesus, South Korea, amid a coronavirus outbreak. (AFP)