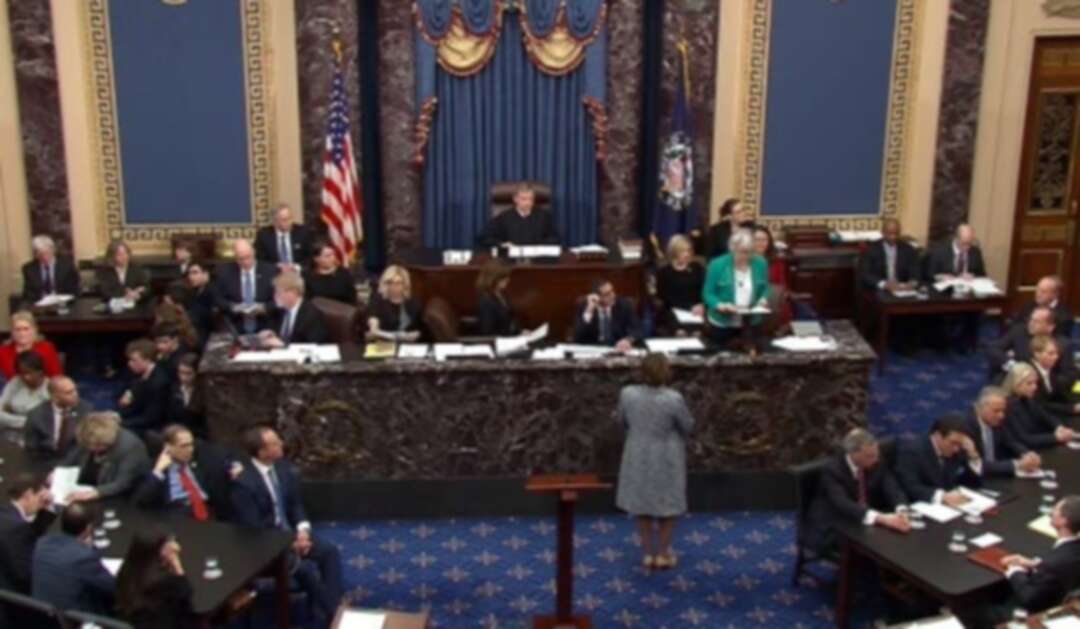 The US Senate during the vote on President Trump impeachment charges. (ScreengrabCourtesy Senate TV)

The US Senate acquitted President Donald Trump of abuse of power and obstruction of Congress on Wednesday following a historic two-week trial.

The Republican-majority Senate voted 52-48 to acquit Trump of abuse of power power stemming from his request that Ukraine investigate political rival Joe Biden, and 53-47 to acquit him of obstruction of Congress by blocking witnesses and documents sought by the House.

Fifty-two Republicans voted to acquit Trump of abuse of power while all 47 Democrats voted to convict and remove him from office.

Utah Senator Mitt Romney was the only Republican to break ranks, voting for conviction on the abuse of power charge.

But Romney sided with the Republican majority on the obstruction of Congress charge.

The Democratic-controlled House of Representatives impeached Trump on December 18 for withholding military aid to Ukraine to pressure Kiev to investigate his political rival Joe Biden.

The businessman-turned-politician, 73, survived only the third presidential impeachment trial in US history - just like the two other impeached presidents - in his turbulent presidency’s darkest chapter. Trump now plunges into an election season that promises to further polarize the country.

Trump was acquitted largely along party lines on two articles of impeachment approved by the Democratic-led House of Representatives on December 18, with the votes falling far short of the two-thirds majority required in the 100-seat Senate to remove him under the US Constitution.

A conviction on either count would have elevated Vice President Mike Pence, another Republican, into the presidency.

Romney joined the rest of the Republican senators in voting to acquit on the obstruction charge. No Democrat voted to acquit.

On each of the two charges, the senators voted one by one on the Senate floor with US Chief Justice John Roberts presiding.

Senate Majority Leader Mitch McConnell and other Republicans engineered a stripped-down trial with no witnesses or new evidence. Democrats called the trial a sham and a cover-up. Trump called the impeachment an attempted coup and a Democratic attempt to annul his 2016 election victory.

On Twitter after the vote, the president posted a video showing Trump campaign signs for future elections from 2024 onward ending with “Trump 4EVA.” The US Constitution limits a president to two elected four-year terms in office.

Trump said he would deliver a public statement at noon (1700 GMT) on Thursday on his acquittal.

I will be making a public statement tomorrow at 12:00pm from the @WhiteHouse to discuss our Country’s VICTORY on the Impeachment Hoax!

“President Trump has been totally vindicated and it’s now time to get back to the business of the American people,” Trump’s campaign manager, Brad Parscale, said in a statement.

Throughout the impeachment drama, Trump and his Republican allies kept up their attacks on Biden’s integrity. It remains to be seen how much political damage that inflicted.

In the first of the state-by-state contests to determine the Democratic challenger to Trump, Biden placed a disappointing fourth in Iowa, according to incomplete results from Monday’s voting. Biden has accused Trump of “lies, smears, distortions and name-calling.”

Trump faces no serious challengers for his party’s presidential nomination. He is poised to claim the nomination at the party’s convention in August and previewed in his State of the Union address on Tuesday campaign themes such as American renewal, economic vitality and hardline immigration policies.

Romney, the 2012 Republican presidential nominee, broke with his party to vote to convict Trump on the abuse-of-power charge. Romney called the president’s actions in pressuring Ukraine to investigate Biden “grievously wrong” and said Trump was “guilty of an appalling abuse of public trust.”

“What he did was not ‘perfect,’“ Romney said on the Senate floor, as Trump has described his call with Ukraine’s president that was at the heart of the scandal. “No, it was a flagrant assault on our electoral rights, our national security and our fundamental values. Corrupting an election to keep one’s self in office is perhaps the most abusive and destructive violation of one’s oath of office that I can imagine.”

Romney, a moderate and elder statesman in his party, paused during his speech as he became choked with emotion after mentioning the importance of his religious faith.

Republican Senator Lindsey Graham lashed out at Democrats, saying: “What you have done is unleash the partisan forces of hell.”

Chuck Schumer, the top Senate Democrat, said Trump’s acquittal in an unfair trial was worth nothing.

“No doubt, the president will boast he received total exoneration. But we know better. We know this wasn’t a trial by any stretch of the definition.”

In his speech, McConnell said: “The architects of this impeachment claimed they were defending norms and traditions. In reality, it was an assault on both.”

Democrats expressed concern that an acquittal would further embolden a president who already challenges political norms. They have painted him as threat to US democracy and a demagogue who has acted lawlessly and exhibited a contempt for the powers of Congress and other institutions. They also have voiced concern over Russia interfering in another American election.

The acquittal handed Trump his biggest victory yet over his Democratic adversaries in Congress. Democrats vowed to press ahead with investigations - they are fighting in court for access to his financial records - and voiced hope that the facts unearthed during the impeachment process about his conduct would help persuade voters to make him a one-term president.

Trump’s job approval ratings have remained fairly consistent throughout his presidency and the impeachment process as his core conservative supporters - especially white men, rural Americans, evangelical Christians and conservative Catholics - stick with him.

The latest Reuters/Ipsos poll, conducted on Monday and Tuesday, showed 42 percent of American adults approved of his performance, while 54 percent disapproved. That is nearly the same as when the House launched its impeachment inquiry in September, when his approval stood at 43 percent and disapproval at 53 percent.

The trial formally began on January 16. The Senate voted 51-49 last Friday to defeat the Democrats’ bid to call witnesses such as Trump’s former national security adviser John Bolton, with only two Republicans joining them.

In the hours before the vote, numerous senators gave speeches on the Senate floor explaining their vote.

Trump, now seeking a second four-year term, has been under the shadow of some sort of investigation for most of his presidency. The acquittal marked the second time in 10 months that he withstood an existential threat to his presidency.

In March 2019, Special Counsel Robert Mueller found insufficient evidence that Trump engaged in a criminal conspiracy with Russia in its interference on his behalf in the 2016 election.

Mueller did not exonerate Trump of obstruction of justice in seeking to impede the investigation but stopped short of concluding the president acted unlawfully. Trump declared full vindication.

Last July 25, Trump asked Ukrainian President Volodymyr Zelenskiy during a phone call to “do us a favor” and open an investigation into Biden and his son Hunter Biden and into a discredited theory beneficial to Russia that Ukraine colluded with Democrats to meddle in the 2016 election to harm Trump.

Hunter Biden had joined the board of Ukrainian energy company Burisma while his father was US vice president. Trump accused the Bidens of corruption without offering substantiation. The Bidens denied wrongdoing.

Democrats said Trump further abused his power by withholding $391 million in security aid approved by Congress to help Ukraine battle Russia-backed separatists and by dangling a coveted White House meeting as leverage to pressure Zelenskiy to announce the investigations.

Under the Constitution, impeachment is the mechanism for removing a president or certain other federal officials for “treason, bribery or other high crimes and misdemeanors.”