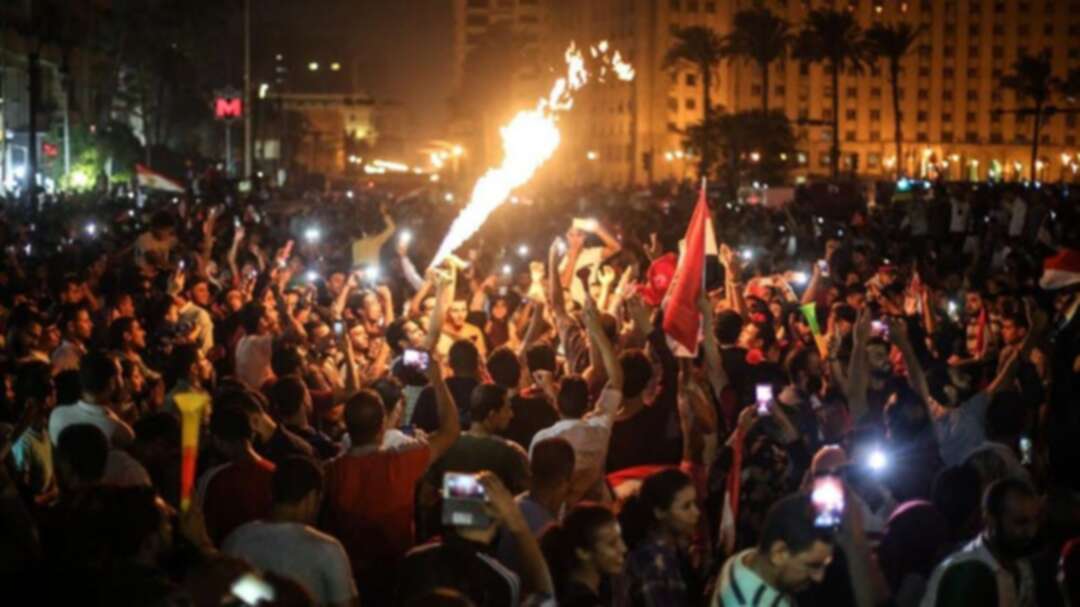 A 2017 image of Egyptian fans gathering to celebrate the national team's qualification for the World Cup. Several media outlets have said the image is from demonstrations held on Friday night. (via Twitter)

Qatar’s Al Jazeera news network has come under fire for its coverage of weekend protests in Egypt, during which it aired eight-year-old footage that it portrayed as new material.

However, there has been no repeat of the large scale uprising in 2011, which ousted former President Hosni Mubarak.

UAE Minister of State for Foreign Affairs, Anwar Gargash, has accused the Muslim Brotherhood, which has links to Qatar, of instigating the latest disturbances in an attempt to undermine Egypt’s stability.

“The Brotherhood’s organized campaign against Egypt and its stability has failed miserably,” Gargash said on Saturday in a post on Twitter.

He added: “The reality is not what is being promoted in externally-funded media.”

Social media users have shared screenshots, which show Al Jazeera using archive footage of Tahrir Square demonstrations in 2011 to report on events over the weekend.

The channel also aired live broadcasts from across the country, describing a possible revolution and at one point suggesting President Abdel Fattah el-Sisi had “fled” to the US, where he had travelled to attend the opening of the United Nations General Assembly.

“El-Sisi boarded his plane headed to New York not to attend the UN General Assembly like he announced, but to monitor the situation from the outside and seek refuge,” said Al Jazeera presenter Ahmed Mansour on Twitter.

He added: “If the protests continue, El-Sisi will not return to Egypt.”

Leaders of 193 UN member states are expected to attend this year’s annual General Assembly, from September 23-37, to discuss global issues.

In a separate incident a report by Anadolu Agency, Turkey’s state-run news agency, showed Egyptian fans celebrating their national team’s qualification for the World Cup in 2017 – and claimed it was latest footage of demonstrators in Tahrir Square.

Kuwaiti daily newspaper Alqabas had to tweet an apology for using the image.

Meanwhile, Egyptian media outlets continue to show footage of empty streets - and an empty Tahrir Square, the focal point of the 2011 uprising.

One Twitter user in Cairo also posted a video of himself driving through Tahrir Square, telling his followers there were no protesters on the streets.

However, on Sunday “Tahrir Square” remained one of the top trending topics in Arabic on Twitter in Qatar.

El-Sisi became president of Egypt following calls from his supporters to run in the 2014 elections after Morsi, a senior figure in the Muslim Brotherhood, was toppled by the military in 2013 following mass demonstrations.

Morsi died on June 17 while he was serving a 20-year prison sentence for a conviction arising from the killing of protesters during demonstrations in 2012, as well a life sentence for espionage in a case related to Qatar. He had denied the charges.

Egypt remains part of an Arab quartet that has staged a diplomatic and commercial boycott of Qatar since June 2017, over the latter’s alleged support for extremists and activities that undermine regional stability.