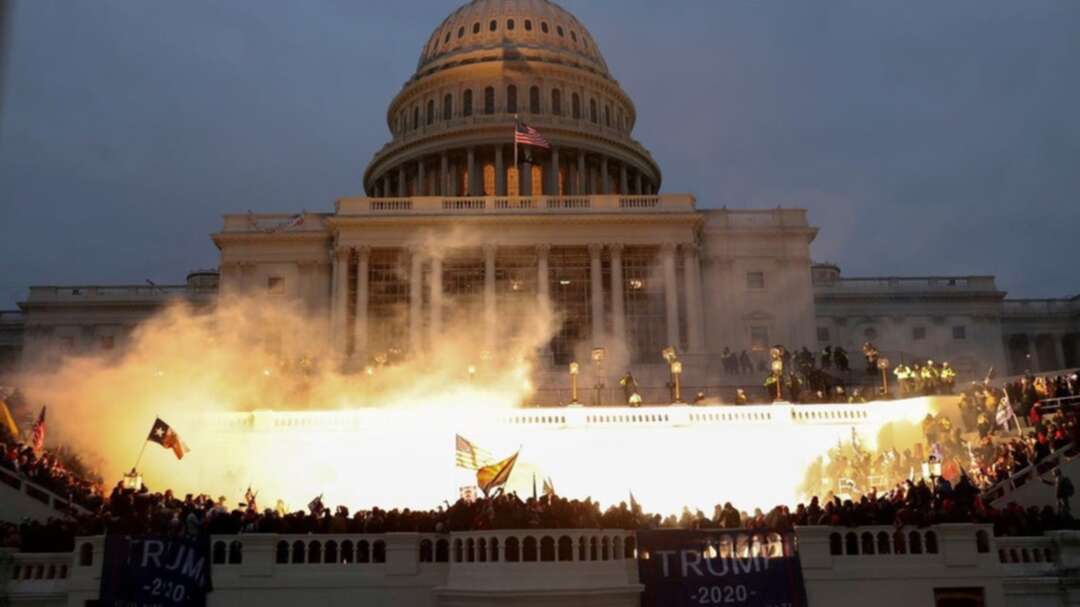 An explosion caused by a police munition is seen while supporters of U.S. President Donald Trump gather in front of the U.S. Capitol Building in Washington, U.S., January 6, 2021. (File photo: Reuters)

Capitol Police say they have uncovered intelligence of a “possible plot” by a militia group to breach the US Capitol on Thursday, nearly two months after a mob of supporters of then-President Donald Trump stormed the iconic building to try to stop Congress from certifying now-President Joe Biden’s victory.

The threat appears to be connected to a far-right conspiracy theory, mainly promoted by supporters of QAnon, that Trump will rise again to power on March 4. That was the original presidential inauguration day until 1933, when it was moved to January 20.

Online chatter identified by authorities included discussions among members of the Three Percenters, an anti-government militia group, concerning possible plots against the Capitol on Thursday, according to two law enforcement officials who were not authorized to speak publicly and spoke on condition of anonymity. Members of the Three Percenters were among the extremists who stormed the Capitol on January 6.

Police were ill-prepared for the mass of Trump supporters in tactical gear, some armed, and it took hours for National Guard reinforcements to come. By then, rioters had broken and smashed their way into the building and roamed the halls for hours, stalling Congress’ certification effort temporarily and sending lawmakers into hiding.

“The United States Capitol Police Department is aware of and prepared for any potential threats towards members of Congress or towards the Capitol complex,” the agency said in a statement. “We have obtained intelligence that shows a possible plot to breach the Capitol by an identified militia group on Thursday, March 4.” Police did not identify the militia group in the statement. 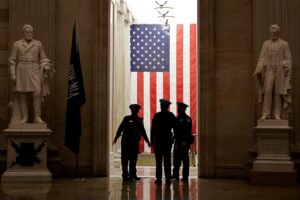 The US House was abruptly wrapping its work for the week Wednesday night given the threat of violence.

An advisory sent earlier this week to members of Congress by Timothy Blodgett, the acting House sergeant-at-arms, said that the Capitol Police had “no indication that groups will travel to Washington DC to protest or commit acts of violence.”

In a note to lawmakers Wednesday morning, Blodgett wrote that the Capitol Police had received “new and concerning information and intelligence indicating additional interest in the Capitol for the dates of March 4th – 6th by a militia group.”

In her testimony to the House panel, acting Capitol Police Chief Yogananda Pittman said her investigators had collected “some concerning intelligence,” but declined to provide any details publicly, saying that it was “law enforcement sensitive” and that she would provide a private briefing for the subcommittee members.

On Wednesday, federal agents were seeking to determine whether there was an increase in the number of hotel rooms being rented in Washington, as well as monitoring flights to the area, car rental reservations and any buses being chartered to bring groups into the capital, a person familiar with the matter told The Associated Press. The person could not publicly discuss details of the security planning and spoke on condition of anonymity.

The FBI and Department of Homeland Security also sent a joint intelligence bulletin to local law enforcement officials Tuesday warning that a group of militia extremists had discussed trying to take control of the Capitol on March 4 and encouraging thousands of people to come to DC to try to remove Democrats from power.

There has been a noticeable decline in online activity on some social media platforms surrounding efforts on March 4, and there was already considerably less online chatter than during the lead-up to January 6, a day that Trump repeatedly had promoted for a his rally and encouraged thousands to come to the nation’s capital. 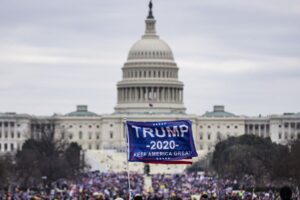 Several QAnon groups still operating on the social media messaging platform Telegram warned followers to stay away from any events on March 4, claiming it was a setup for Trump supporters.

“If there are groups out there planning and advertising events on or around March 4 anywhere in the country (DC included) we strongly urge everyone to avoid them entirely,” one Telegram user wrote late last month in a QAnon group that has more than 65,000 followers.

Accounts that promoted the January 6 event that led to a violent storming of the US Capitol have since been suspended by major tech companies like Facebook and Twitter, making it far more difficult for QAnon and far-right groups to organize a repeat of the mass gathering on Thursday.

Twitter banned more than 70,000 accounts after the riots, while Facebook and Instagram removed posts mentioning “stop the steal,” a pro-Trump rallying cry used to mobilize his supporters in January. And the conservative social media platform Parler, which many of Trump’s supporters joined to promote false election fraud conspiracy theories and encourage friends to “storm” the Capitol on January 6, was booted off the internet following the siege.

Capitol Police say that they have stepped up security around the Capitol complex since January’s insurrection, adding physical security measures such as the fencing topped with razor wire around the Capitol and members of the National Guard who remain at the complex. The statement said the agency was “taking the intelligence seriously” but provided no other specific details on the threat.

“I think they are definitely prepared for any threats that may come our way in the next couple days,” said Rep. Jennifer Wexton, D-Va., who was one of several lawmakers briefed privately by the police. Wexton added that she still questioned the long-term security plan for the Capitol and said Pittman, the acting chief, “has not come up with proactive ways to fix the issues that they had.”

So far, about 300 people have been charged with federal crimes for their roles in the riot. Five people, including a Capitol Police officer, died.