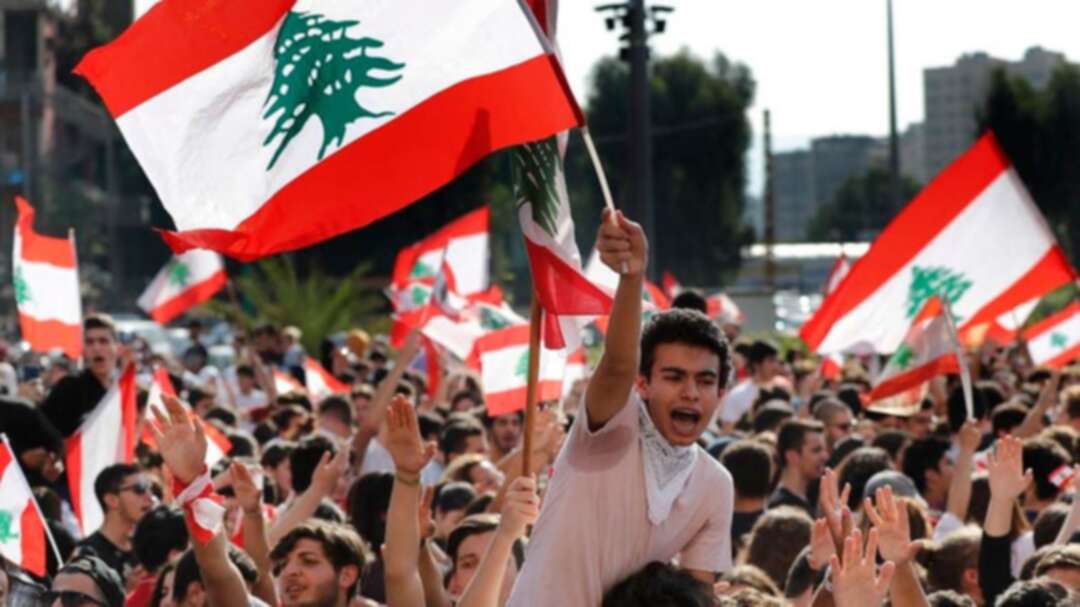 Student protesters wave national flags as they protest against the government in front of the education ministry in Beirut, Lebanon, on November 7, 2019. (AP)

Already facing the worst economic crisis since the 1975-90 civil war, Lebanon has been pitched deeper into turmoil since Ocober 17 by a wave of protests against the ruling elite that led Hariri to resign as prime minister on October 29.

Banks reopened on Friday after a two-week closure but customers have encountered restrictions on transfers abroad and withdrawals of hard currency.

Hariri has been holding closed-door meetings with other factions in the outgoing coalition cabinet over how the next government should be formed, but there have been no signs of movement towards an agreement.

Parliament Speaker Nabih Berri said he wanted Hariri to be nominated as prime minister again. Under Lebanon’s sectarian power-sharing system, the prime minister is a Sunni Muslim, the president a Maronite Christian and the speaker a Shi’ite.

Aoun has yet to formally start consultations with lawmakers over nominating the new prime minister. The presidency said Aoun and Hariri discussed contacts aimed at solving “the current government situation”.

The protesters have called for a new government that would exclude leaders of Lebanon’s traditional sectarian political blocs. But politicians are still wrangling over its shape.

Hariri has held two meetings this week with Gebran Bassil, a son-in-law of Aoun. Both Aoun and Berri are allies of the powerful Iran-backed Shi’ite group Hezbollah.

“A huge” collapse ahead

Druze leader Walid Jumblatt, who had two ministers in the outgoing cabinet, said on Twitter that despite the protests, Hariri and Bassil “were meeting on how to improve and beautify” a political deal they struck in 2016.

Politician Samy Gemayel, whose Kataeb party was not part of the outgoing cabinet, said the main players had not understood the depth of the protest movement.

“I don’t see any change in the behavior of any of the main actors after everything that happened,” he told Reuters. “They are still trying to form a government where they can all be happy, and this is not what the people are asking for.”

The unrest erupted three weeks ago after a build-up of anger at rising costs of living and political leaders accused of steering the country toward collapse.

“We are protesting in front of all public institutions to shine a light on corruption, demand the change of laws, and let the political elite know their cards have been revealed,” said Nayla Geagea, a lawyer protesting in Beirut on Thursday night.

The economy is choked by one of the world’s largest debt burdens. Growth, low for years, is now around zero. Capital inflows vital to financing budget and trade deficits have been slowing for years, making foreign currency harder to obtain.

Gemayel said Lebanon was at the beginning of “a huge monetary and financial collapse.”

He added that he expected restrictions on financial transactions would increase as banks sought to keep their cash.

Two importers indicated access to finance was not improving.

“So far we are still finding some liquidity to manage some transactions but the cash is being squeezed so we are worried about the longer-term,” said Hani Bohsali, general manager of Bohsali Foods and president of the Syndicate of Importers of Foodstuffs, Consumer Products and Drinks. A second importer said his bank would not allow him to make international transfers.