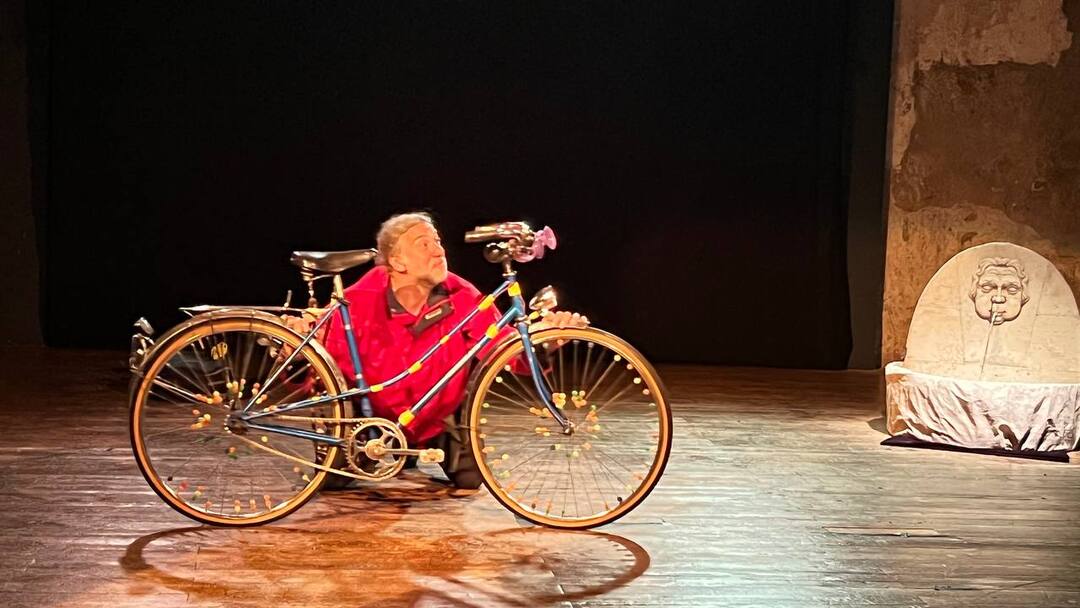 Omar carries his only bike; all that was left to him after losing all his family and friends. He embraces it with love and crosses the border from the war-torn Syria to reach France. Omar decides to submit an asylum application for himself and it (the bike) in two separate application files. His bike was everything to him, his girlfriend, the Syrian people, sister and friend, it is the only memory from his friend the French writer Michel Seurat who was assassinated in Lebanon after he wrote the book "Syria, the State of Barabarity".

The forementioned monodrama is shown at La Voire Moderne Parisien theatre in Paris. It is written, directed and acted by the Syrian actor, Nawar Boulboul. Nawar's tools on stage were the audio archive of Michel Seurat, his (Nawar's) bicycle and a suitcase.

Theatre's spectators - many of whom are Syrians at the play's first performance in Paris - identify with this tragic political comedy.

The character switches between two languages, Syrian Arabic and French. The audio music clips were carefully added by Vanessa Guinaux

Omar's bike was a key character, the hero baptized it "Égalité". Throughout the show, Omar talks to the bike, pampers her (the bike) and puts a beautiful curtain between her wheels to clean her well. He tries to kiss her, but she refuses.

"égalité" represents all the Syrian people, the sister, the mother and the beloved. The bike is a veiled reference to Alma Shahoud, Nawar's girlfriend who was killed in a detention centre. "We created a love relationship (him & the bike)," Nawar said.

Nawar delivered an outstanding performance between soliloquy and pantomime. The bicycle dynamo is used to heat the tea, the fountain is turned into a torture chamber, and the wall is turned into a wailing wall in memory of the dead friend.

It seems that he uses everything to bring back the memory of the Syrian revolution and its "state of Barbarity" the title of a collection of articles by the sociologist Michel Seurat who was kidnapped in Lebanon in 1985, tortured and died in the detention centre and only his bones were found.

Nawar got the idea for his play when he got by chance the audio archive of Michel Seurat in 2018 at the same time he (Nawar) got Seurat's book "Syria, the State of Barabarity" presented by Dr Burhan Ghalioun.

"I got two rich materials to make a theatrical show out of them in the middle of the current limited artistic horizon. The question was simply how we can make a theatrical show away from crying and complaining to talk about our cause without presenting ourselves as victims first to the French public and secondly to the European one. The idea was to make something far from the way of the boring news," said Nawar. "I tried to make the show with the two materials and later introduced the bike and the idea of being a refugee, and then presenting all this in the style of dark comedy, so to speak. I don't really like this term (dark comedy), but it is the most appropriate."

Choosing the character of the French writer Michel Seurat to be the rebellious voice longing for liberty in the Syrian revolution was studied by Nawar for several reasons. "In fact, Michel Seurat's personality is a problematic figure according to scholars and researchers who worked for the Syrian regime, and most importantly, Seurat was able to explain and analyse the structure of this regime in the late 1970s and early 1980s," he explained.

"The more than 45-hour audio archive, in addition to the book "Syria, the State of Barabarity", was one of the main factors for choosing this character," Nawar explained. "We chose Michel Seurat to honour him as a fighter who sacrificed himself for the truth despite his friends' warnings of the brutality of the Syrian intelligence and Hezbollah. He continued despite knowing he was going to his demise." Nawar likens him to Christ who died for his people.

"Dictatorship responds to critical plays, films, articles, ... only with violence either killing or arresting. We remember all the Syrian detainees today, prisoners of conscience like Gebran Tueni, Samir Kassir, Salim al-Bazri, and Luqman Salim who was killed by five shots in the head," he explained.

"Why does the inanimate bicycle symbolise equality? Does it mean equality is dead or does it symbolise the sad East where equality does not exist, but the bicycle is waiting to be driven? Is it a symbolic invitation to lead equality and return to life?" Nawar was asked.

Nawar believes equality exists neither in the East nor other parts of the world. It is an aim, like justice, that has not been achieved. All people fight for equality and justice, whether we make it or not, but if we did, then we would be in utopia, and from there the idea of the bike came and we made it a character, it got cold, sick, tired, lost hope and collapsed," Nawar said.

Why is it important to talk about the cause of the Syrian detainees on stage, especially since the Syrians have become unable to do anything for their country all these years?

Nawar sadly asserts that the Syrians are not able to do anything for the detainees. "We are screaming into the void because the Syrian cause has become very complicated." "We, the Syrians, have lost our cause, we are scattered, divided, as a revolution and Syrians," Nawar blames the Syrians.

Nawar contrasts the Ukrainian war with the Syrian cause

"Today, the Syrian cause has been neglected. The West does not know who to help if we are divided and scattered, so it only helped with humanitarian aid like food and tents, thus, the cause was left in addition to the issue of detainees and wounded which is one of the most important issues of the Syrian crisis ".

"It is my job as an actor to return the detainees' issue to the fore and, thus equality or justice, to say to the Europeans we still have revolutionaries and I express this by saying to Michel that Bashar al-Assad has displaced 12 million and killed 2 million, and half a million are in prisons, and no one knows what is happening to them, "You come back to talk about politics, go back to death, Miche!" Nawar said to Michel in the play.

Why was the show called "Equality", a word from the motto of the French Revolution (Equality, Liberty and Fraternity)?

"Not only because it is the motto of the French Republic but because it is a slogan for anyone who longs for liberty or the establishment of a state based on justice, liberty, equality, fraternity and solidarity, therefore, I took these two terms i.e. equality and liberty.

Nawar explains his idea by talking about dialogue in a scene from the play where he speaks to equality: "When you take French citizenship you can bring your sister Liberty through reunification process."

He ended his interview by saying: "Justice ran away from Syria and became a refugee. Liberty is still stuck there, the liberty that does not exist, for which we went out, will come to France and we will return the three of us together to Syria so that Syria will be free."