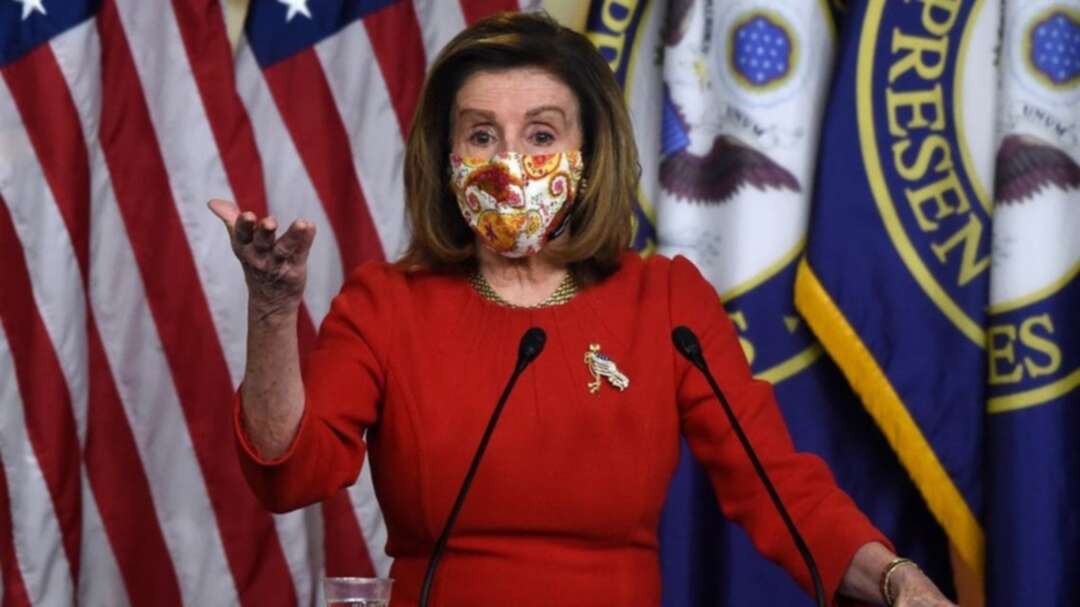 US Speaker of the House, Nancy Pelosi, Democrat of California, speaks during her weekly press briefing on Capitol Hill in Washington, DC, on February 11, 2021. (AFP)

U.S. House of Representatives Speaker Nancy Pelosi told Britain there could be no U.S.-UK trade deal if it proceeds with plans to unilaterally scrap some of the rules governing trade with Northern Ireland.

Britain warned European Union authorities this week that it could discard post-Brexit regulations painstakingly negotiated with Brussels including border checks on some goods shipped from mainland Britain to Northern Ireland.

The trade protocol aims to keep the British-run province, which borders EU member Ireland, in both the United Kingdom's customs territory and the EU's single market.

Pelosi said she viewed the existing agreement as essential to maintaining the 1998 Good Friday peace deal, brokered by the United States to end three decades of conflict in Northern Ireland between Catholic nationalist militants and pro-British Protestant paramilitaries in which around 3,600 people were killed.

Pelosi said in a statement: "If the United Kingdom chooses to undermine the Good Friday accords, the Congress cannot and will not support a bilateral free trade agreement."

Britain says it is acting in the interests of preserving the Good Friday deal.

A spokesman for Prime Minister Boris Johnson welcomed Pelosi's commitment to preserving the peace deal and said a U.S. Congressional delegation will meet Britain's foreign and trade ministers in coming days to discuss the planned changes to the protocol.

Pelosi said: "I urge constructive, collaborative and good-faith negotiations to implement an agreement that upholds peace."

Britain had viewed a trade deal with the United States as the one of the biggest prizes of leaving the EU but hopes of a quick agreement were dashed when the incoming Biden administration made clear it was not a priority.

Any U.S.-British trade agreement would have to pass the U.S. Congress.

Pelosi's warning follows a visit to Washington by Johnson's newly appointed special envoy for the Northern Ireland protocol in the United States, Conor Burns, to explain the British position.

A rivalry splits the Muslim Brotherhood’s Gerontocracy Josep Borrell: EU does not forget about other refugees amid Ukraine war