A customer pushes her trolley next to near empty shelves after people hoarded food as authorities are discussing the latest measures to implement to curb the spread of the coronavirus disease (COVID-19), in Beirut, Lebanon, January 11, 2021. (File photo: Reuters)

Lebanon’s food prices have become the highest in the Middle East and North African region, as inflation rates continued to soar amid one of the country’s worst economic crises to date, according to the World Bank.

In the World Bank’s periodic assessment of the repercussions brought about by the COVID-19 pandemic on food price inflation in the MENA region, they found that between Feb. 14, 2020 and March 8, 2021, price surged across all food categories.

The country’s inflation rate in 2020 rose to almost 85 percent, Lebanese newspaper The Daily Star reported, adding that it hit its highest point since 1992.

Fresh and frozen cattle meat prices jumped by 110 percent during the assessment period, indicating the highest increase in price for this item in the region.

Lebanon, Syria, and Djibouti were the only three countries to record a rise of over 35 percent in this category.

The average price increase in this category across the rest of the region was 11 percent. 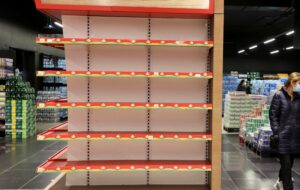 The price of eggs increased by an average of 7 percent for the rest of the region while Lebanon, Djibouti, Iran, Syria and Yemen saw a rise of more than 20 percent in the price of eggs.

Potato prices in Lebanon rose by just over 71 percent, accounting for the highest in MENA while the prices of frozen chicken rose by 68.4 percent.

The World Bank also found that the prices of apples and oranges in the country grew by 58.2 and 58.4 percent respectively.

Beirut-based grocery store manager Ziad Hassan told the New York Times on Monday that instead of the daily email from the supermarket chain’s management to inform him to adjust the pricing of grocery items, he began to receive emails as often as three times a day, ordering price increases.

He added that his employees would often not have enough time to finish marking the products with new prices before the next one arrived.

Eighteen months have passed since mass protests against the country’s political class began and since then, the Lebanese lira has lost 90 percent of its value, driving more than half the population below the poverty line, Reuters reported on Friday.

In August 2020, the United Nations estimated that over 55 percent of the country’s population were trapped in poverty and had been struggling for bare necessities, stating that extreme poverty registered a threefold increase from 2019 to 2020.

The country has been grappling with the impact of the Aug. 4 Beirut Port Blast which injured thousands and killed hundreds, extreme hyperinflation, the coronavirus pandemic, and an incompetent ruling class.

From the Document on Human Fraternity for Hope Probe and Human Rights ... the UAE Aspires to Future UAE reports 2,304 new COVID-19 cases, five deaths in 24 hours