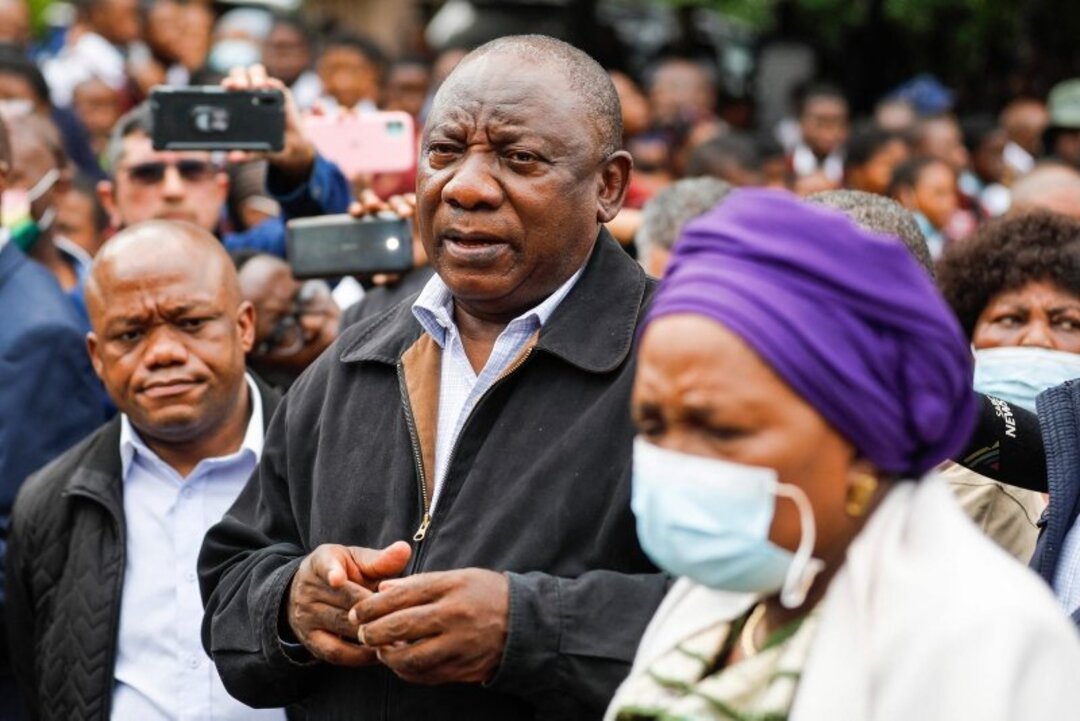 South Africa President Cyril Ramaphosa visits families who had lost loved ones in KwaZulu-Natal province, including a family with four children, after floods and mudslides ravaged homes on Tuesday Apr 12 (File photo: A news)

The King will host his first state visit as monarch later as he welcomes the South African president to the UK.

King Charles and Camilla, the Queen Consort, will host a banquet for President Cyril Ramaphosa at Buckingham Palace as part of the two-day trip.

Mr Ramaphosa is also set to address politicians in a joint sitting of both Houses of Parliament.

It is the first state visit to the UK in more than three years after they were stopped during the Covid pandemic.

The Prince and Princess of Wales will first greet the South African president at his London hotel on Tuesday morning and escort him to Horse Guards Parade for the ceremonial welcome with the King.

His Majesty will then ride down the Mall with Mr Ramaphosa in a carriage procession to Buckingham Palace.

There the King will host the president at a private lunch and show him an exhibition of Royal Collection items relating to South Africa.

Mr Ramaphosa, who has been head of government in South Africa since 2018, will follow the tradition of laying a wreath at the Tomb of the Unknown Warrior in Westminster Abbey, and then address MPs and peers in the Royal Gallery of the Palace of Westminster.

Later, the King will host a glittering white-tie banquet at Buckingham Palace for President Ramaphosa where both men will give speeches.

The visit follows the traditional format put in place during the reign of the late Queen Elizabeth II.

King Charles narrowly avoids being hit by eggs in York

BBC southern Africa correspondent Pumza Fihlani says the president is hoping to use the state visit to drum up support for UK investment in South Africa to bolster the country's economic development and industries.

But his visit comes at a time when the head of state is facing criticism over South African unemployment levels and a return to power outages affecting households, businesses and schools across the country - almost every day for a number of hours at a time.

This month he also said he would "step aside" if charged over an alleged cover-up of a robbery at his private farm, which he denies.

On Wednesday, the Earl of Wessex will escort Mr Ramaphosa to the Royal Botanic Gardens, at Kew in south-west London.

The South African leader will then visit Downing Street to meet Prime Minister Rishi Sunak, before returning to the palace to bid farewell to the King.

Mr Sunak said: "South Africa is already the UK's biggest trading partner on the continent, and we have ambitious plans to turbocharge infrastructure investment and economic growth together.

"I look forward to welcoming President Ramaphosa to London this week to discuss how we can deepen the partnership between our two great nations and capitalise on shared opportunities, from trade and tourism and security and defence."

The president is also set to receive a call from Labour leader Sir Keir Starmer and attend a Guildhall banquet with the Duke and Duchess of Gloucester.

UNICEF: France needs to act to protect children and their rights Moscow says on alert after Crimea hit by 'drone attack'