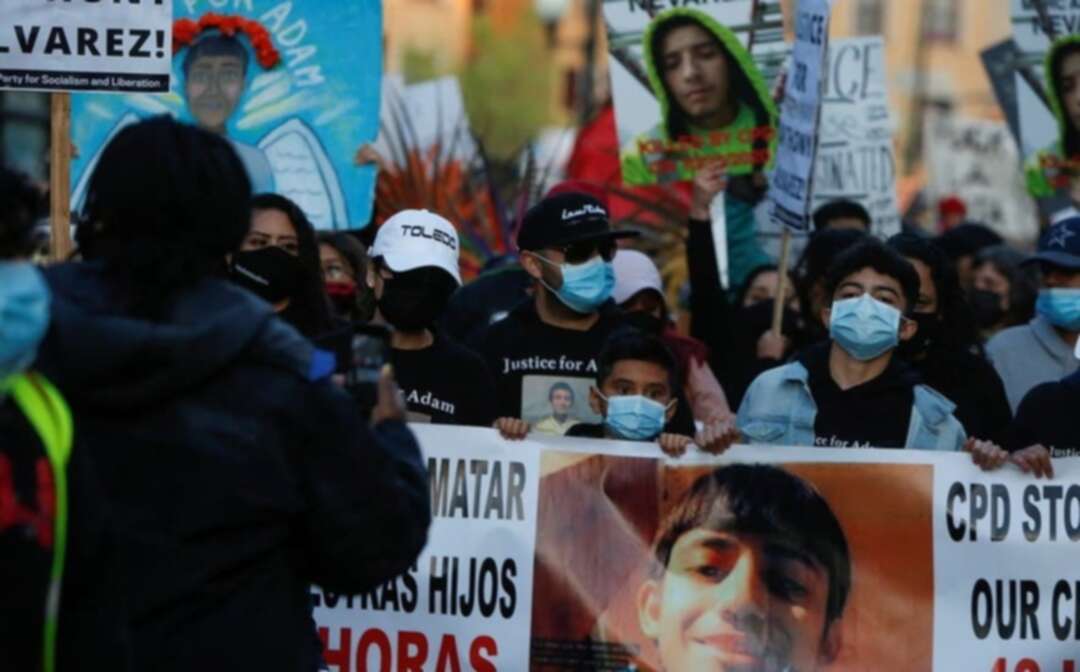 Protest in the aftermath of the death of 13-year-old-boy Adam Toledo, in Chicago. (Reuters)

Hundreds marched through the streets of Chicago on Friday to protest the police shooting of Adam Toledo, a day after the city released a graphic video of a police officer shooting and killing the 13-year-old Latino boy in an alley two weeks ago. Chicago

Demonstrators chanted “Hands up, don’t shoot!” and “No justice, no peace!” while hoisting signs with messages such as “Justice for Adam Toledo” and “Stop Racist Police Terror!” in a march that remained peaceful as night fell.

The demonstrators observed a moment of silence and expressed solidarity with the boy’s relatives, who had implored protesters to remain peaceful. The rally began in Logan Square Park, about five miles (8 km) north of where the shooting occurred.

The nine-minute video, recorded by Eric Stillman’s body camera, shows showed the 34-year-old officer chasing and shooting Toledo on March 29 at 2:30 a.m. in Little Village, a working-class neighborhood on the city’s West Side with a large population of Mexican Americans.

Toledo appeared to be holding a handgun when he complied with Stillman’s order for him to stop. Toledo then dropped the weapon and raised his hands immediately before Stillman opened fire, the video showed.

The release of the video came as tensions are running high in Chicago and across the country over the issues of policing and racial justice. 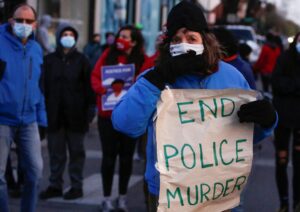 Protest in the aftermath of the death of 13-year-old-boy Adam Toledo, in Chicago. (Reuters)

In the latest police-involved shootings of people of color, an officer in a Minneapolis suburb shot and killed a Black man during a traffic stop, and now faces a second-degree manslaughter charge. On Thursday, the defense rested its case in the trial of Derek Chauvin, the former Minneapolis officer charged with murder in the death of George Floyd, whose death last year ignited a nationwide wave of protests.

The Chicago Police Department said in a statement it was closely monitoring events across the country and deployed additional resources throughout the city. The department said it has also canceled days off for police officers in several units and teams.

Businesses throughout the city boarded up windows over the past week in anticipation of possible riots and looting after the release of the video. The city saw widespread looting and rioting in the days and weeks following Floyd’s death last May.

Stillman, a five-year veteran of the force, is on administrative desk duty pending an investigation into the incident. He attorney was unavailable for comment on Friday.

John Catanzara, president of the Chicago Fraternal Order of Police union, told CNN on Thursday that Stillman had only eight-tenths of a second to make the decision whether to shoot and his actions were justified.

“That officer’s actions were actually heroic,” he said.