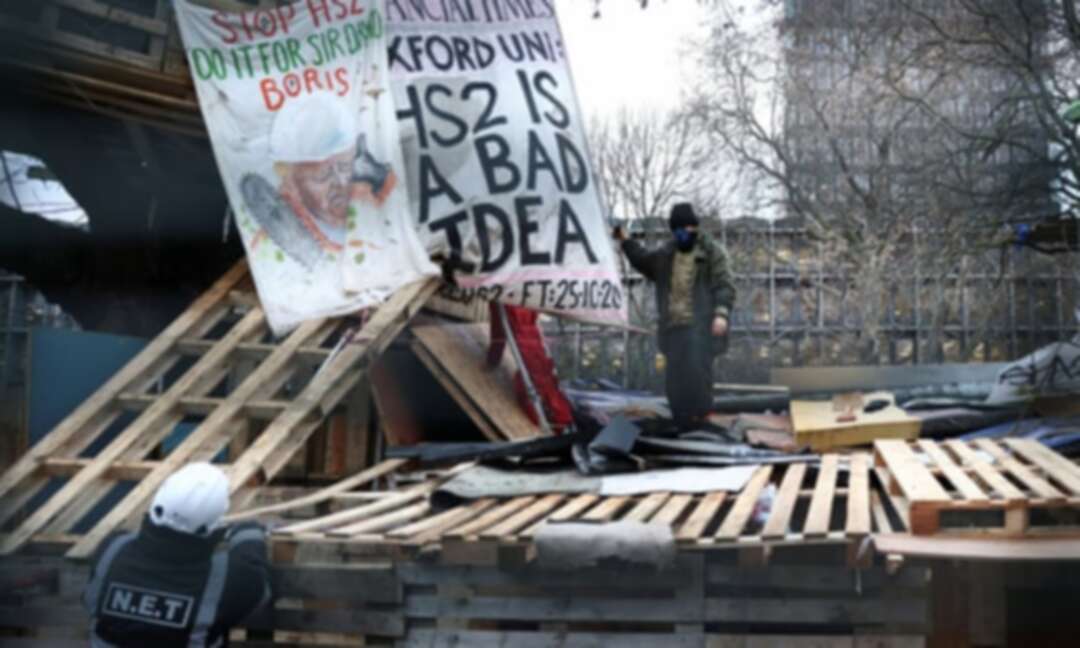 A makeshift protest camp at Euston station. Protesters have been underground since Tuesday night.

Environmental protesters inside the tunnel close to Euston station in London say conditions are deteriorating with a shortage of oxygen, five internal tunnel collapses and an influx of liquid mud.

One activist issued an urgent appeal for help just after 4pm on Friday from inside the tunnel, saying things were getting worse very quickly.

The activists have been underground since Tuesday night in a network of tunnels dug over several months beneath Euston Square. They are protesting against the construction of HS2, the high-speed rail link that, if constructed, will come into Euston station.

Larch Maxey, one of the activists in the tunnel, said: “HS2 are endangering our lives yet again. They need to help us make the tunnel safe. They have made this an urgent situation. We haven’t got the air supply.” He said the eviction team were preventing the tunnellers from clearing soil and water from the tunnel, which was making it very dangerous.

Earlier he had told journalists via video that the tunnellers had had a chance to sleep for a couple of hours on Thursday after a previous sleepless night due to HS2 contractors continually working. He and others inside the tunnel blamed work on the surface for causing the internal collapse.

In a video on Friday afternoon Dan Hooper, known as Swampy, said liquid mud had been pouring in not only when it rained overnight but since the rain had stopped. He said that if this was connected with any HS2 actions it could put lives at risk, and that if anything went wrong the activists would be unable to quickly vacate the tunnel.HS2 sources have denied any of their actions are putting the activists’ lives at risk. In a statement on Thursday, National Eviction Team, the HS2 contractors dealing with the eviction, said: “The National Eviction Team has been engaged to lawfully remove activists from Euston Gardens. In their attempts to delay their removal, unlawful occupiers have occupied a crudely dug tunnel on the land.

“Due to the activists’ inexperience, they are exposing themselves to significant risk by being in the tunnel. They also increase the risk to the high court enforcement officers specialist tunnelling team, who have been engaged to safely remove them.” They did not comment on the claim that the eviction team have prevented protesters from removing soil and water from the tunnels.

The eviction team say they are using air compressors to circulate the air inside the tunnels and monitor air conditions. They say they are also assessing how close the tunnels run to pipes and cables. “It will take time, careful planning and the work of skilled personnel to resolve the situation in a safe and controlled manner. Many of the activist occupiers of the land are known to us from previous protest activity, and we can expect little cooperation from some of these individuals.”

One former tunnel protester, Martin Porter, said: “As someone who did this in the dim and distant past, and was once Dan Hooper’s neighbour under what is now Manchester airport’s second runway, I have the highest respect for anyone who puts their life on the line for the planet in this way.

“From my experience I would say the eviction is the most dangerous part of the process. The eviction team will probably be pumping oxygen into the tunnels, but as this air is dry it dries out the tunnel walls. The Cakehole tunnels at Manchester airport stood for nearly five months without any problems before the evictions, but after only a week of trying to get people out the walls started cracking and there was a partial cave in.”