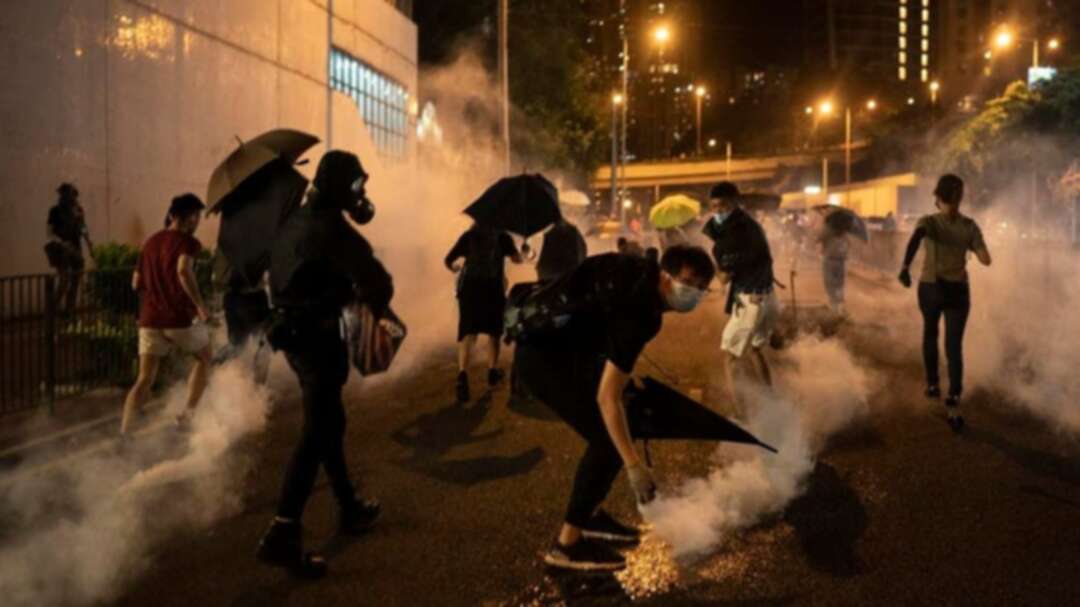 Protesters run away after police fired tear gas during a demonstration near Tai Koo station in Hong Kong, on Oct. 3, 2019. (AP)

Hong Kong’s government is expected to discuss sweeping emergency laws on Friday that would include banning face masks at protests, two sources told Reuters, an unprecedented move to ease months of violent unrest in the Chinese-ruled city.

Demonstrations are planned on Friday against any potential anti-mask law, with multiple protests also expected over the weekend as activists denounce the police shooting of a teenaged secondary school student on Tuesday.

Police said the officer involved in the shooting acted in self-defense because his life was under threat. The teenager, the first protester hit by live fire during months of unrest, is in hospital in a stable condition.

Invoking emergency law would allow Beijing-backed Hong Kong leader Carrie Lam to make any regulations she considers in the public interest, including censorship of the media and control of transport.

Growing opposition to the Hong Kong government has plunged the financial hub into its biggest political crisis in decades and poses the gravest popular challenge to Chinese President Xi Jinping since he came to power in 2012.

All stations were operating normally on Friday morning.

Any implementation of emergency law could further antagonize demonstrators already angry at what they perceive as creeping interference by Beijing in their city’s affairs despite a promise of autonomy in the “one country, two systems” formula under which Hong Kong returned to China in 1997.

China dismisses accusations it is meddling and has accused foreign governments, including the United States and Britain, of stirring up anti-China sentiment.

Police, who have responded to petrol bomb-throwing protesters with tear gas, water cannon and, on Tuesday, live ammunition, had urged the government to impose curfews to help maintain public order.

The government declined to comment on whether it was considering imposing emergency laws, stating they would study existing legislation to cope with the protests.

Authorities have already loosened guidelines on the use of force by police, according to documents seen by Reuters.

Black-clad protesters, who typically wear masks to shield their appearance, have targeted police, who in turn have been accused of excessive force and heavy-handed tactics. Police say they have shown restraint in the face of increased violence.

Pro-Beijing groups have also been pushing for legislation to ban face masks at public demonstrations.

The protests began over a now-withdrawn extradition bill, which would have allowed people to be sent to mainland China for trial, and have intensified markedly since June. They have also evolved into wider calls for democracy, among other demands.