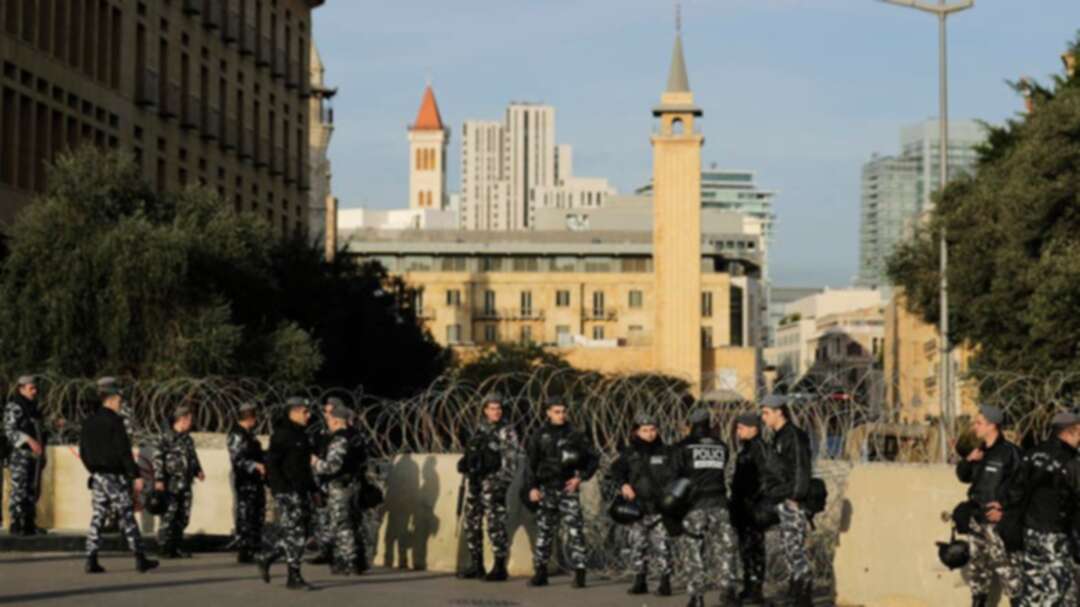 Police stand guard on the road leading to the parliament building in downtown Beirut, Lebanon. (AP)

Lebanese security forces scuffled Monday with protesters near the parliament building in downtown Beirut, where lawmakers are scheduled to begin a two-day discussion and later approval of the state budget amid a crippling financial crisis.

Thousands of soldiers, including Special Forces, as well as riot policemen were deployed on major roads in the capital and its suburbs. They had sealed off the zone leading to parliament to prevent protesters from blocking the lawmakers’ path.

The protesters have been demonstrating for more than three months against the ruling elite that has run the country since the end of the 1975-90 civil war. The protesters have rejected the new 20-member government of Prime Minister Hassan Diab, which was announced last week.

During the two-day session, parliament is scheduled to discuss the 2020 budget that was drafted by the government of former Prime Minister Saad Hariri, who resigned in late October in response to the nationwide protests.

The tight security measures underscored the determination to hold the two budget sessions despite the protests. In November, thousands of protesters closed roads leading to parliament, forcing a postponement of a legislative session after most lawmakers weren’t able to reach the legislature.

In recent days, security forces have set up concrete blast walls around parliament and the nearby government headquarters, known as the Grand Serial, to keep protesters from reaching them. Over the past two weeks, downtown Beirut witnessed riots that left more than 500 civilians and policemen injured.

The protest movement broke out on Oct. 17 over government plans to impose new taxes. Protest organizers say the movement will not accept anything less than the resignation of the ruling elite, who they blame for widespread corruption and mismanagement.

Lebanon has one of the world’s highest public debts in the world, standing at more than 150 percent of gross domestic product. Growth has plummeted and the budget deficit reached 11 percent of GDP in 2018 as economic activities slowed and remittances from Lebanese living abroad shrank.

The national currency that has been pegged to the dollar since 1997 lost about 60 percent of its value in recent weeks, raising alarms among many Lebanese who have been losing their purchase power.