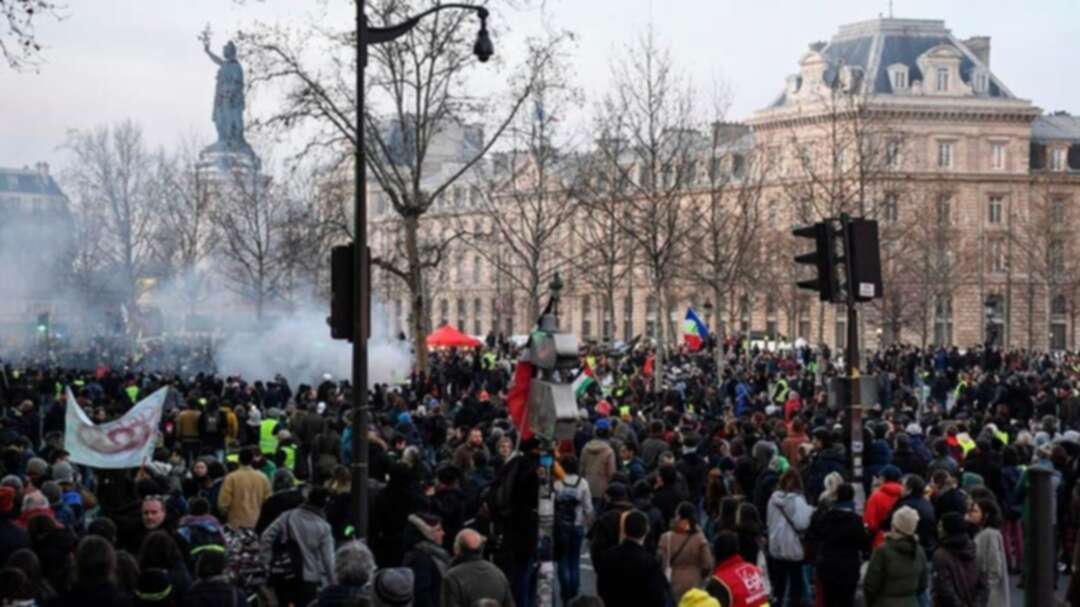 People demonstrate on Republic Square in Paris as part of a nationwide multi-sector strike against the French government's pensions overhaul. (Photo AFP)

Paris commuters battled to reach work again on Monday as a 40-day-old strike dragged on and France’s premier vowed “to go to the end” with the pension reforms that sparked the action.

There was still major disruption on the Paris metro and national railway systems, even after Prime Minister Edouard Philippe announced a major concession to the unions at the weekend.

But the situation was somewhat improved from the previous weeks with all Paris’ metro lines now open in peak hours and the trains running slightly more regularly.

“We are going to go to the end” in implementing the pension reforms, Philippe told France 2 TV late Sunday.

“Those who incite (the strikers) to continue the strike are leading them perhaps into a dead end... I think that they need to assume their responsibilities.”

“I think you know the phrase ‘you need to know how to end a strike’. We are not far now,” he added.

Philippe announced Saturday he would drop plans to increase the official age for a full pension to 64 from 62 -- the so-called “pivot age” a move welcomed by the more moderate trade unions like the CFDT.

However, the more hardline CGT, FO and Solidaires unions were standing firm, calling for the strike and protests to continue, including a major demonstration on January 16.

The government is not budging on its plan for a universal scheme to rationalize 42 existing pension schemes into a single, points-based system it says will be fairer and more transparent.

The strike has also been observed by other public service workers affected by the reforms, including staff at the Paris Opera which on Saturday cancelled its performance of The Barber of Seville, its first show of 2020.

Demonstrators in the capital on Saturday, some masked and hooded, broke shop windows along their protest route, set fires and threw projectiles at police in riot gear who responded with tear gas.