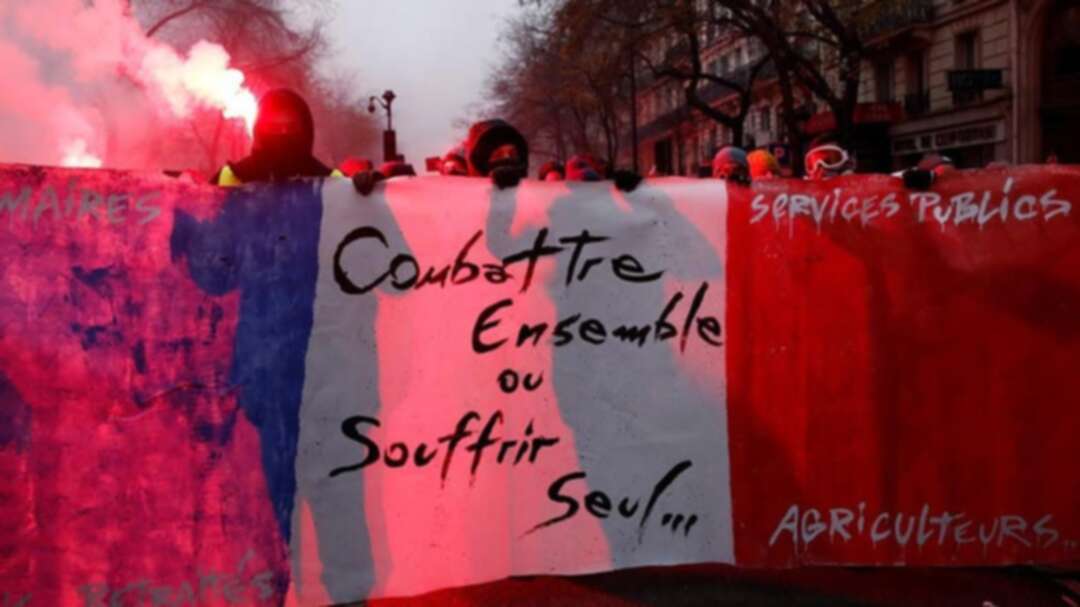 Protesters hold a banner during a demonstration against French government's pensions reform plans in Paris as part of a day of national strike and protests in France, December 5, 2019. The slogan reads "Fight together or suffer alone". (Photo: Reuters)

A strike that crippled public transport and closed schools across France entered a second day on Friday, with trade unions saying they planned to keep going until President Emmanuel Macron backs down from a planned reform of pensions.

The strike pits Macron, a 41-year-old former investment banker who came to power in 2017 on a promise to open up France’s highly regulated economy, against powerful trade unions who say he is set on dismantling worker protections.

The outcome depends on who blinks first - the unions who risk losing public support if the disruption goes on for too long, or the government which fears voters could side with the unions and blame officials for the standoff.

Macron’s government, along with many ordinary French citizens, have made plans to cope with the strike action through the weekend, but may take a different view on Monday, if the disruption extends into a second week.

Rail workers voted to extend their strike through Friday, while labor unions at the Paris bus and metro operator RATP said their walkout would continue until Monday. Other trade unionists were due to decide early on Friday how long they would keep up the strike.

“We're going to protest for a week at least, and at the end of that week it's the government that’s going to back down,” said 50-year-old Paris transport employee Patrick Dos Santos.

The industrial action already on Thursday brought tens of thousands of protesters into the streets in Paris and forced the closure of parts of the Louvre Museum, home to Leonardo da Vinci's “Mona Lisa”.

Union leaders were buoyed by the proportion of healthcare staff, railway workers and teachers who heeded the strike call, and by the numbers who showed up at an anti-government march in Paris and other French cities.

“There’s a noise in the streets, I hope the windows of the Elysee are open,” said Philippe Martinez, secretary-general of the CGT union, referring to the presidential administration.

Police used tear gas in central Paris on Thursday afternoon when protesters on the fringes of the trade unions’ march threw fireworks at officers, ransacked bus stops, and set fire to

There were dozens of arrests. Union leaders said those involved in the violence were not affiliated with the trade union movement.

Macron wants to simplify France’s unwieldy pension system, which comprises more than 40 different plans, many with different retirement ages and benefits. Rail workers, mariners and Paris Opera House ballet dancers can retire up to a decade earlier than the average worker.

Macron says the system is unfair and too costly. He wants a single, points-based system under which for each euro contributed, every pensioner has equal rights.

The government has given no indication it will make any climb-down over the central elements of the reform.

But mindful of the anger the subject has generated, Macron’s officials have left themselves scope to make some concessions over the way that the changes will be phased in.