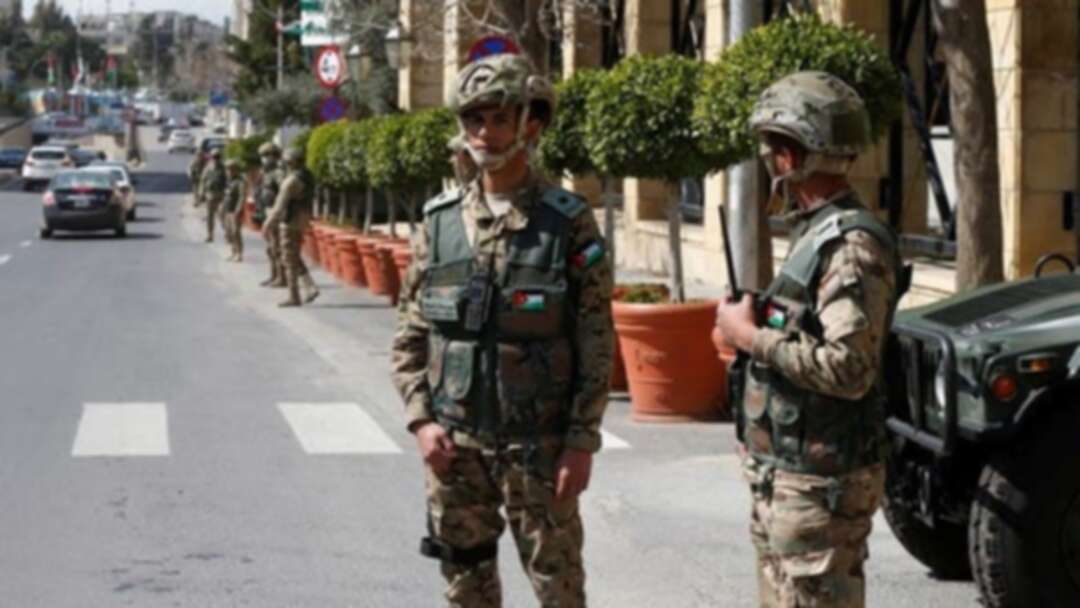 Jordanian army members stand guard outside a hotel that was transformed into a quarantine station amid concerns over the coronavirus (COVID-19) in Amman, Jordan, March 17, 2020. (Reuters)

The Arabnews reported, the Jordanian army announced it had killed four people who attempted to smuggle “large amounts” of drugs into the country from Syria.

A source from the Jordanian Armed Forces said that troops on Jordan’s eastern borders with Syria opened fire on people who attempted to infiltrate the kingdom, killing four of them and injuring others.

The source said that the infiltrators were forced to retreat into Syrian territory.

The source told Arab News: “After inspecting the area, 181 palm-sized sheets of hashish, 637,000 Captagon narcotic pills, and 39,600 tramadol pills were found and handed over to the concerned authorities."

The Syrian Observatory for Human Rights in London said that six people were injured in the operation with some of them in a critical condition.

It said that one of those killed by the Jordanian army was the leader of a group that works in the narcotics industry in southern Syria and had “strong” ties with Lebanon’s Shiite Hezbollah.

The operation on Sunday was the latest since Jordan announced a crackdown on drug smuggling from Syria and a change in rules of engagement to curb what it described as a “dramatic increase” in drug trafficking from its neighbor.

Jordan has warned that Syria was becoming a narco-state, posing cross-border threats to Jordan, the region, and the rest of the world.

The JAF has recently said that a total of 361 smuggling attempts from Syria were foiled in 2021, leading to the seizure of about 15.5 million pills of narcotics of different types.

It foiled more than 130 smuggling attempts from Syria in 2020 and seized about 132 million Captagon pills and more than 15,000 sheets of hashish.

Describing the figures as “dramatically high,” a military source, who requested anonymity, told Arab News that “Illicit drug cultivation and manufacture has become a growing industry in Syria.”

According to the Syrian news website Enab Baladi, drug smuggling operations are most active in the southern regions of Daraa and Al-Suwayda.

The news website quoted sources as saying, most of the smuggling routes are controlled by armed Bedouin tribes that have affiliations inside Jordan.

Experts say the strong presence of the militant organization Hezbollah in Syria and the expansion of its drug trafficking operations are the main reasons for the war-torn country becoming a narco-state and for the increase of drug smuggling into Jordan, Arab Gulf states, and Europe.

In recent remarks to Arab News, Fayez Dweiri, a retired major general and military analyst, said Hezbollah had resorted to the narcotics trade to secure funding after the US sanctions on Iran.

He said: “There is an established illicit drugs industry for Hezbollah in Beirut’s Dahieh Al-Janubiya and in the Shiite stronghold of Baalbek."

Dweiri said that Hezbollah “has relocated some of its drug factories to Aleppo and other Syrian regime-controlled regions."

He said: “The US sanctions on Iran have hit Hezbollah hard, obliging Tehran’s most funded proxy to look for other sources of revenues."

According to a report by the Washington Institute for Near East Policy, Hezbollah has significantly expanded and institutionalized its drug trafficking enterprises, which now generate more money than its other funding streams.