Lebanese citizens in the Chouf district evacuated their homes on Tuesday as forest fires raged in the district’s mountains. (Twitter)

Lebanese citizens in the Chouf district evacuated their homes on Tuesday as forest fires ravaged the Chouf’s tree-covered mountains.

The sudden rise in temperature is said to have caused the forest fires that began in southern-central Lebanon early on Monday.

The Civil Defense, Sidon Fire Department, and the Lebanese Army worked to put out the fire in the early hours of Monday, according to Lebanon’s Daily Star newspaper. However, overnight winds caused the blaze to break out again.

Lebanon’s Prime Minister Saad Hariri said on Tuesday the government has asked for outside support in fighting the fires and that an investigation will be launched to determine the cause of the fires, according to Lebanese newspaper The Daily Star.

Cyprus sent helicopters on Tuesday morning to help put out the flames, according to the country’s Interior Minister Raya El Hassan.

“Cypriot helicopters are working to extinguish the fires in Mechref,” El Hassan said in a tweet. 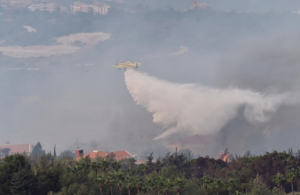 Lebanon’s Minister of Defense also shared a video on Twitter of two helicopters putting out the fire in the town of Mechref.

Videos of the blaze spread quickly on social media platforms accompanied by the Arabic hashtag “Lebanon is burning,” as people called on the authorities to quickly take the necessary actions to control the fire.

There have been no reports of casualities so far.

The Chouf district is known for its natural beauty and is a tourist destination.

According to a study by Lebanon’s Ministry of Environment, around 34 percent of the country’s territory is at moderate to high risk of fires this year. Environmental factors could lead to Lebanon facing its worst fire season in many years, experts told The Daily Star newspaper.