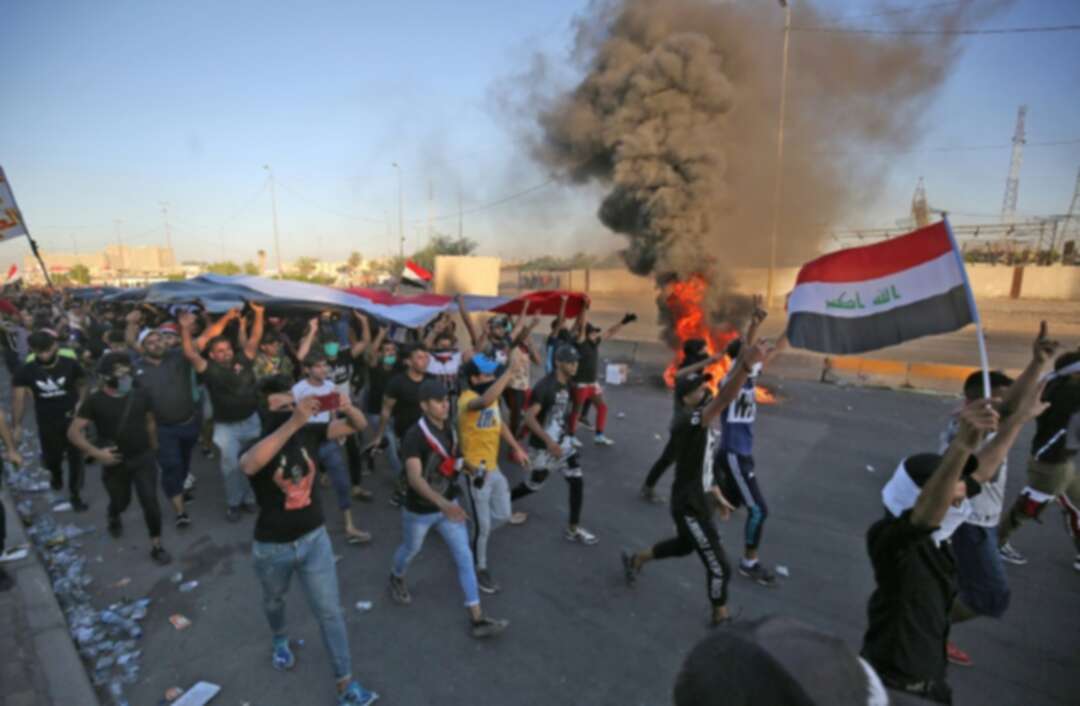 Since they erupted a week ago, deadly protests in Iraq have been tracked closely in Iran where they are seen as a plot to undermine ties between the neighbours.

Tehran has close but complicated relations with Baghdad, holding significant clout among its Shiite political groups.

The two countries fought a devastating war from 1980 to 1988 and Iran's influence in Iraq grew after the US-led invasion toppled longtime dictator Saddam Hussein in 2003.

Clashes that broke out in Iraq last week between protesters and security forces have claimed more than 100 lives, and wounded over 6,000 -- most of them demonstrators struck by bullets.

The rallies began on Tuesday with calls to reduce corruption and unemployment but have spiralled into demands for the fall of the government and overhaul of the political system.

A string of Iranian officials have since come out with statements accusing their country's arch-foes of being behind the unrest.

"Iran and #Iraq are two nations whose hearts & souls are tied together... This bond will grow stronger day by day," he added.

State news agency IRNA said the supreme leader was reacting to the violence in Iraq.

The official news agency weighed in with its own commentary, accusing the US, Saudi Arabia and Israel of stirring the Iraqi protests in order to spoil Iran's ties with Iraq and Syria.

"Unprecedented protests in Iraqi cities... show that some forces inside and outside of the region are seriously concerned about the closeness and cooperation" of Baghdad, Tehran and Damascus, it added.

Iran's government spokesman Ali Rabiei opened his weekly news conference on Monday with a statement on the Iraqi crisis.

He said there "are ill-wishers who seek to sabotage any opening between us and those neighbours who've had differences of opinions in recent years".

The spokesman called on "the great people of Iraq to show more self-restraint and seek democratic and legal means to reach their demands.

"As always, the Islamic Republic of Iran expresses its readiness to stand beside Iraqi brothers and sisters and help them.

"No form of propaganda can sever the people of Iran and Iraq."

Iran has accused its foes of deliberately stirring trouble in Iraq at a time when vast numbers of pilgrims are heading there for one of the world's largest religious events.

A top military adviser to Khamenei said those behind the unrest would be unable to deter the faithful, however.

"They want to scare people into not going to Arbaeen, but even if it rains arrows and stones, Hussein's lovers will not be afraid," Major General Yahya Rahim Safavi was quoted as saying by Tasnim news agency.

Arbaeen marks the end of the 40-day mourning period for the seventh-century killing of Imam Hussein by the forces of the Caliph Yazid.

Last week, Iran urged citizens who were planning to head to Iraq to delay their travel for the pilgrimage that culminates on October 17 with the Arbaeen commemoration.

On Monday, Iran reopened the Khosravi border crossing with Iraq following its closure last week as the protests raged.

IRNA said the fact that the "provocations" came ahead of Arbaeen showed Iran's enemies were "scared".

Judiciary chief Ebrahim Raisi said those responsible for the unrest in Iraq aimed to undermine Arbaeen.

"The seditionists intend to undermine and sap enthusiasm for this great event," he said, quoted by state television's website.

The vigilant people of Iraq exposed this sedition. But everyone must be careful. The seditionists are seeking new tricks at any moment to overshadow the Arbaeen ceremony and to undermine it."

The hardline Keyhan newspaper said "evidence" pointed to the Americans, Saudis and Israelis being involved.

A columnist in the reformist Shargh daily also suggested the Americans, Israelis and Saudis might be the "hidden hands" behind the Iraqi protests.

"Even if that is not the case, the chaotic and tense situation in Iraq today can prepare the grounds for these actors to ride the wave to fulfil their objectives and demands," wrote Abdelrahman Fathollahi.