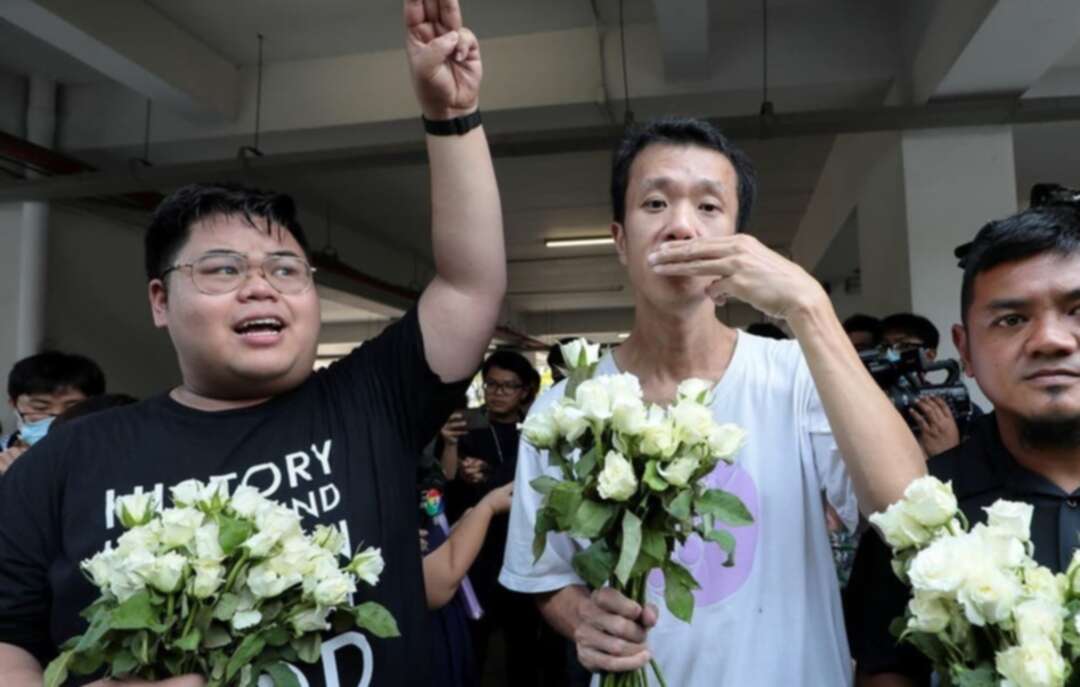 (L-R) Bunkueanun "Francis" Paothong, 21, Ekachai Hongkangwan, 45, and Suranat Panprasert, 35, flash three fingers salutes as they turn up at the attorney general's office after being on charges of attempted violence against the queen during a pro-democracy demonstration last year, when a royal motorcade encountered dozens of protesters, in Bangkok, Thailand March 31, 2021. (Reuters)

Five pro-democracy activists in Thailand were charged Wednesday with the rarely used criminal offence of attempting to harm the queen, over an encounter with a royal motorcade during a protest last year.

If convicted, the group could face the death penalty or life in prison under a law that has not been used for decades and punishes any “act of violence against the queen or her liberty”.

The incident came as thousands of protesters marched from the Democracy Monument to the Government House in Bangkok in October last year.

A motorcade ferrying Queen Suthida and Prince Dipangkorn Rasmijoti passed through the protest zone in the afternoon.

Some protesters crowded around the vehicle, raising the three-fingered salute of defiance adopted from “The Hunger Games” books and films.

Such an overt challenge of the monarchy is unprecedented in Thailand, where a draconian defamation law has been used to shield the royal family from criticism.

One of the accused, Bunkueanun “Francis” Paothong, 21, said he had no intention of harming the queen.

He told reporters it had been a “wretched and excruciating five months” in legal limbo.

The pro-democracy protests in Bangkok kicked off last July and called for the resignation of Prime Minister Prayut Chan-O-Cha’s government and a rewrite of the military-scripted constitution.

But the most controversial demands have been for reforms to the monarchy, including the abolition of lese majeste, the royal defamation law.

Close to 20 pro-democracy protesters and student leaders are on remand in prison while fighting lese majeste charges, sedition and other offences.

Unemployment among Saudi Arabians dropped to 12.6 pct in Q4 of 2020: Authority France’s Macron to address country on COVID-19 situation