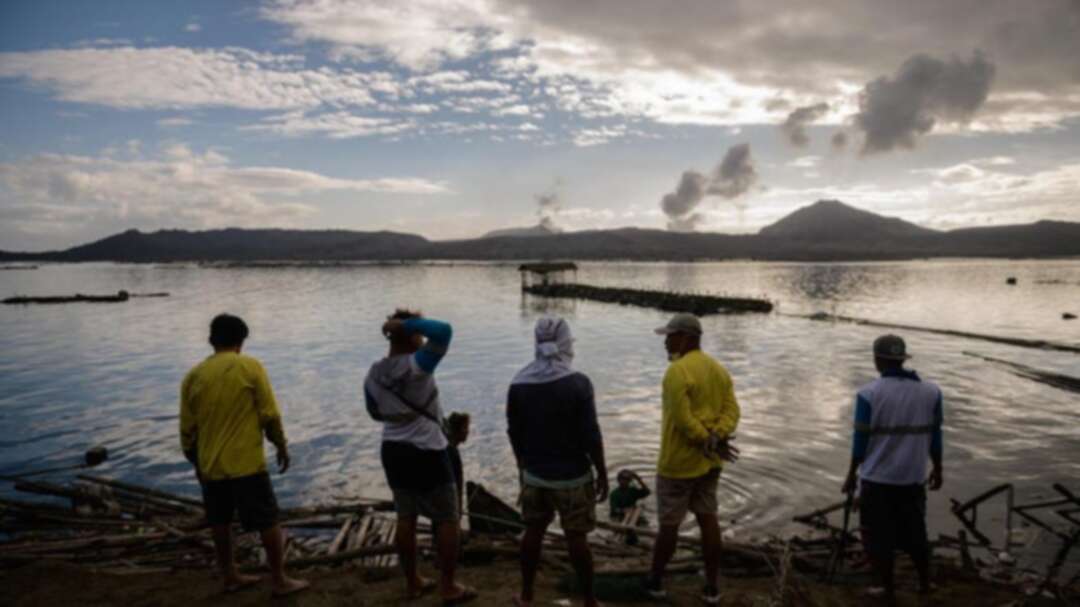 A group of fishermen make repairs to their operations affected by the ash-fall from the Taal volcano, January 20, 2020. (AFP)

Philippine authorities ordered a crackdown Monday on evacuees’ daily visits to their homes in the danger zone around Taal volcano as scientists warned it could be “recharging” for a more powerful explosion.

More than 110,000 people have taken refuge in evacuation centers since Taal burst to life a week ago, but many hard-hit towns have let residents back for hours each day to fetch items, feed livestock and clean up their houses.danger

“We are directing DRRMCs (civil defense officers)... not to allow anyone to enter the danger zone,” said Epimaco Densing, undersecretary for the Department of Interior.

“It’s dangerous, that’s why we have imposed a lockdown,” he told reporters.

The volcano shot ash 15 kilometers (nine miles) high in the January 12 eruption, which crushed scores of homes and killed livestock as well as crops.

However, seismologists have warned the volcano could imminently unleash a much bigger eruption, posing a deadly risk to anyone in the 14-kilometer radius “danger zone” that surrounds it.

Continued earthquakes and an increase in the volcano’s emission of sulfur dioxide gas were possible indications of a “recharge” of Magna, which would drive a major blast, a top scientist said.

“We consider these are signs that there’s a re-supply of magma which could possibly... cause an eruption that could be strong,” Renato Solidum, head of the Philippines’ seismological agency, told a local radio station.

Until experts deem the threat has passed, evacuees will need the shelters spread across some 400 sites that range from school campuses to covered basketball courts.

Conditions vary between sites, but several evacuees told AFP they were getting food and a place to sleep, but that bathrooms were in high demand.

“It’s really difficult to take a bath or use the toilet because of the sheer numbers (of evacuees), but we can take it,” said Sonia Awitan, 55.

“What is important is we have a place to shelter and sleep in,” she added.

Authorities say they have so far been able to provide fundamental services to the evacuees, but are concerned about the longer term.

“We can handle the (current evacuee numbers). The issue is how are we going to sustain resources over the longer term,” Alex Masiglat, spokesman for disaster relief in the ground zero Calabarzon region.

“Our concern is how are we going to sustain a long term evacuation period,” he added.

Though no people have been reported killed in the eruption, it has wrought havoc on agriculture and tourism.

Taal is set in the middle of a picturesque lake that is a popular draw for tourists, especially since it is just 60 kilometers south of the hot and crowded capital Manila.