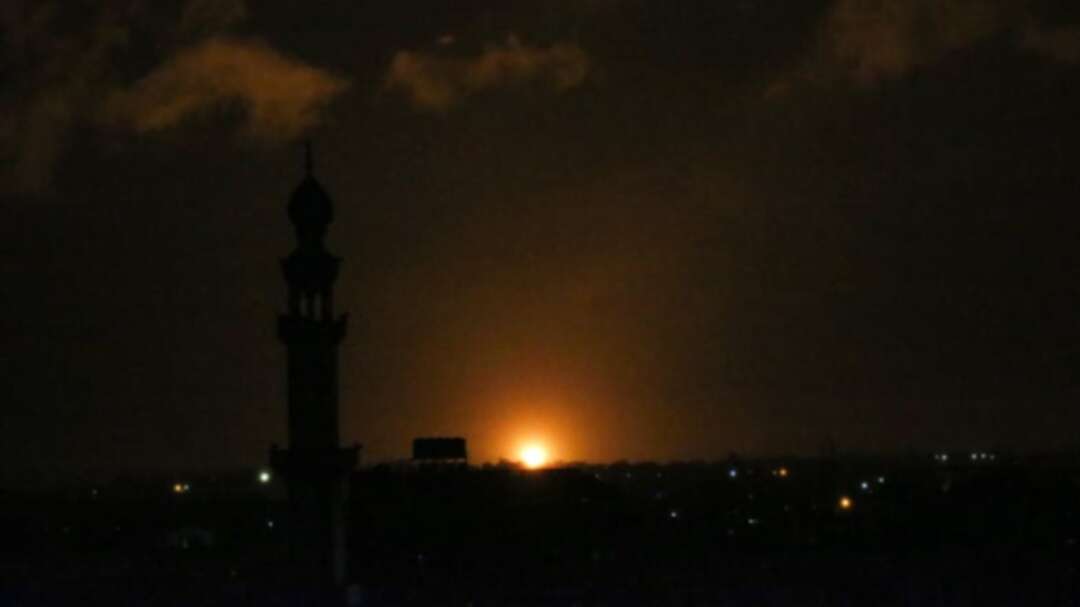 A ball of fire is seen following an Israel airstrike at Khan Yunis in the southern Gaza Strip early on February 10, 2020. (AFP)

An Egyptian delegation arrived in Gaza on Monday seeking to ease tensions, a Hamas security source said, after Israel again attacked the enclave with air strikes in response to projectiles fired by militants.

Egypt has long served as a mediator between Israel and the Palestinian Islamist group Hamas that controls the Gaza Strip, but further details on the latest visit were not immediately available.

Israel’s army said in a statement that early on Monday its “aircraft and fighter jets targeted a number of Hamas terror targets in the southern Gaza Strip.”

A Hamas “training compound and military infrastructures” were among the targets, the army added.

There were no reports from Gaza of casualties or damage.

On Sunday night, a projectile was launched from Gaza at southern Israel, triggering air raid sirens and sending thousands to bomb shelters.

A spokeswoman for the regional council in Shaar Hanegev, northeast of Gaza, said the projectile apparently hit an open field.

At least eight rockets or mortars have been fired from the Gaza Strip towards Israel since January 28 when US President Donald Trump released his plan for resolving the Israeli-Palestinian conflict, according to the Israeli army.

Israel has struck back each time, with no Israelis or Palestinians so far reported injured.

Israel and Hamas have fought three wars since 2008 and the tit-for-tat fire has raised fear of another conflict.

On Sunday, Prime Minister Benjamin Netanyahu warned that Israel would “not accept any aggression from Gaza.”

“I will not go into detail about all of our actions and plans in front of the media, but we are prepared to take devastating action against the terrorist organizations in Gaza,” he said.

“Our actions are very strong and they have not yet ended, to put it mildly.”

Trump’s controversial plan would grant Israel a number of its long-held goals, including full control of disputed Jerusalem and a green light to annex all settlements and other parts of the West Bank.

In exchange the Palestinians would be offered a state in the remaining parts of the West Bank and Gaza.

The Trump proposals were angrily rejected by all Palestinian factions as biased towards Israel.