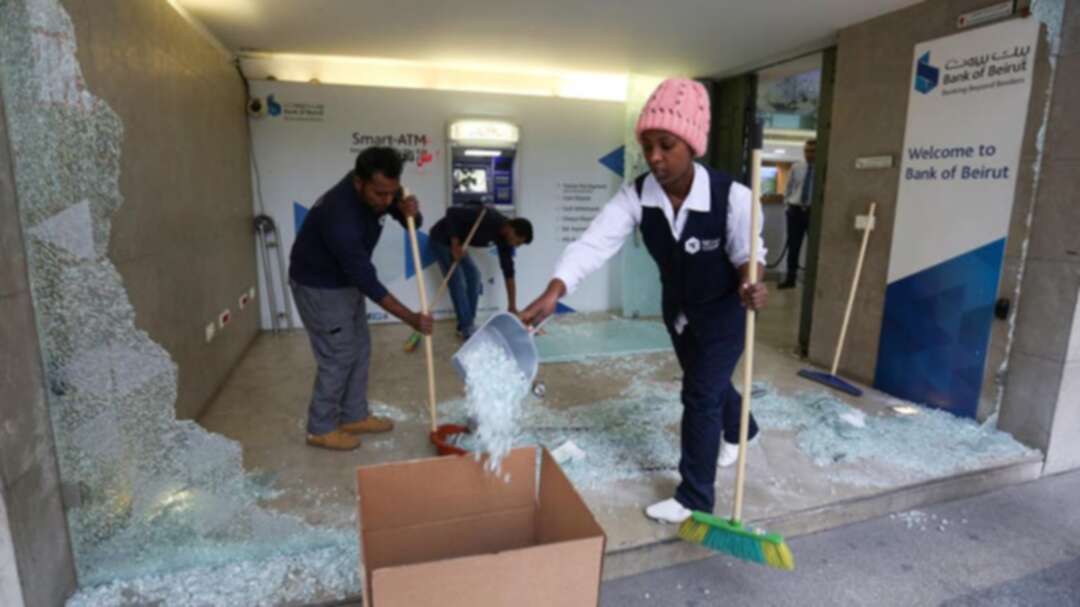 A worker cleans up glass from a broken facade of a bank in Beirut, Lebanon, January 15, 2020. (Reuters)

Reforms to Lebanon’s “kafala” sponsorship system for importing migrant domestic workers from Africa and Asia have long been sought by advocates who say the current system is rife with human rights violations. Lebanon's

Over the past year, the reform efforts have found high-level support in the Labor Ministry. Now, with the country’s economic crisis shrinking the purchasing power of Lebanon’s lower and middle classes, some experts say the time is ripe for “dismantling” the system.

A coalition including human rights groups, government officials, migrant workers, and employers, as well as representatives of the embassies of the workers’ countries, gathered this week in Beirut to discuss changes the Ministry of Labor is considering making to the standard work contract for foreign domestic workers, who currently number about 250,000 in Lebanon. Lebanon's

The new proposed contract aims to give the workers greater protections and could be a step toward more sweeping legislative changes that would give domestic workers the same legal rights as any other employees in the country.

“This will be quite a change in the way Lebanese employ domestic workers,” Ryszard Cholewinski, senior migration specialist with the International Labour Organization (ILO), which has been coordinating a working group studying potential reforms, told Al Arabiya English. “It will not be a popular reform with everyone, but we also feel that in this time of crisis – not just economic but political – this is also an opportunity to put in place much-needed reform.”

While details of the new contract are still being negotiated, as currently proposed, it would address “what have been some of the most abusive elements around the kafala sponsorship system when it comes to domestic workers,” Cholewinski said. For instance, the proposed contract explicitly forbids the common practices of employers confiscating workers’ passports and not allowing them to leave the house on mandated one day off per week. The new contract also increases domestic workers’ mandated annual leave from six days to 15. Lebanon's

And perhaps most important, it will include a clause allowing either the employee or the employer to terminate employment at a month’s notice, which is “very much a step forward when it comes to…addressing issues around forced labor and trafficking,” Cholewinski said. The exact conditions of termination are still being negotiated.

Under the current contract, workers only have the right to terminate the contract if they're not paid for three months, if the employer or a family member physically or sexually abused them and it's officially investigated and proven, or if the employer forces them to work a job that they weren't contracted to do.

At the request of former Labor Minister Camille Abousleiman in April of 2018, the ILO convened a working group to recommend measures that could be taken by the ministry to improve protections for migrant workers. While more sweeping changes – such as removing the language that exempts domestic workers from Lebanon’s labor law – would require approval by Parliament, the Labor Minister can act administratively to change the standard contract.

The formation of the working group predated the mass protests that have swept across Lebanon since October and the country’s ongoing economic crisis, but the crisis has added a new urgency to the matter. Lebanon's

As Human Rights Watch noted in a recent report, many domestic workers have reported that their salaries have been slashed or gone unpaid as their employers have lost their jobs or received reduced payments.

Even those who are still receiving payment have seen the real value of their already-low wages decrease as Lebanon’s currency has undergone a de facto devaluation. For instance, a worker who gets 300,000 Lebanese lira a month – the equivalent of $200 at the official exchange rate – now gets as little as $120 at the black-market rate.

Speaking at the meeting convened to discuss the proposed changes, Ghassan Dibeh, chair of the department of economics at the Lebanese American University said that the economic crisis is also likely to bring about a major decrease in demand for live-in domestic workers, given that many of the families who previously employed them are from the now-struggling middle and lower classes.

“I think the current economic crisis will bring about the end of the kafala system,” Dibeh said. “Its origin is economic, and its end will be economic.”

Indeed, Ali Amine, president of the Syndicate of Recruitment Agencies in Lebanon, told the group that the number of foreign domestic workers coming to Lebanon had dropped off steeply since 2018.

Current Labor Minister Lamia Yammine attended the opening session of this week’s meeting on the proposed reforms, where she told the group that “Lebanon has been and will remain an active member in the international rights system” and is committed to protecting “the rights of all the workers on Lebanese soil, without discrimination.” Yammine declined to be interviewed for this piece.

Some of the workers themselves said they are hopeful that real reforms may finally be made. Lebanon's

“Eleven years I’ve been working on this,” said Malani Kandaarachige, a migrant worker from Sri Lanka who is one of the founders of the Alliance of Migrant Domestic Workers in Lebanon. “We’re tired.”

Kandaarachige said she hopes the workers will be given meaningful input in the final contract. levant

“We want our voice as domestic workers, not for someone to give us something to read or somebody to handle us,” she said. “We are the ones facing the problems.”

Meriam Prado of the Philippines, also a founding member of the alliance, said it’s the first time she has seen serious movement on reforms to the kafala system.

“There’s a lot of discussion to do, but we’re hoping for the best,” she said.