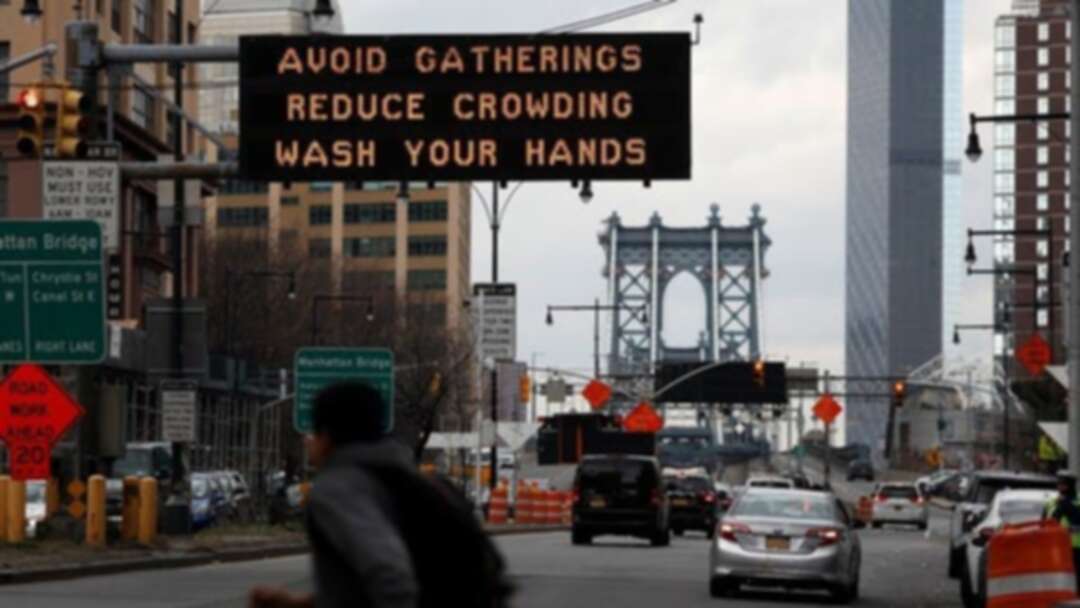 Signage regarding the coronavirus disease is displayed at the entrance to the Manhattan Bridge in the Brooklyn borough of New York City. (Reuters)

Two of the main US coronavirus hot spots on Friday reported their biggest jumps yet in COVID-19 deaths, with the number of fatalities in New York

state alone comparable to the loss of life in the United States in the Sept. 11, 2001, attacks. New York

The figures show that a wave of deaths predicted to overwhelm hospitals even in rich cities like New York is beginning to crash down on the United States.

New York City, the pandemic's epicenter, has mere days to prepare for the worst of the novel coronavirus outbreak, said Mayor Bill de Blasio, whose city has suffered more than a quarter of US coronavirus-related deaths.

New York City is in an “extraordinary race against time,” de Blasio told a news briefing on Friday, warning that the city desperately needed reinforcements of medical supplies, personnel, and hospital beds. He renewed a call for the federal government to mobilize the military.

“We’re dealing with an enemy that is killing thousands of Americans, and a lot of people are dying who don’t need to die,” he said. “You can’t say, every state for themselves, every city for themselves. That is not America.”

Another hot spot, Louisiana, reported that the number of its deaths related to COVID-19 rose from 310 at noon on Thursday to 370 at noon on Friday. This represents the biggest 24-hour increase to date of deaths from the virus in the Southern state.

In New York, the US state hardest hit by the coronavirus, the total death toll was around the same as that on 9/11, when nearly 3,000 people, most of them at New York City's World Trade Center, were killed in attacks on the United States.

The 24-hour death toll in New York state was 562 by Friday morning, Cuomo said, raising the state's total to 2,935 fatalities since the start of the outbreak.

“Personally, it's hard to go through this all day, and then it's hard to stay up all night watching those numbers come in ... and know that you're in charge of the ship at this time,” Cuomo said.

Along with New York and Seattle in Washington state, Louisiana's main city New Orleans has emerged as one of the US focal points of a health crisis that has forced much of the country's workforce to stay home to avoid spreading infection.

The virus has been a far deadlier threat in New Orleans than in the rest of the United States, with a per-capita death rate twice that of New York City. Doctors, public health officials, and available data suggest the Big Easy's high levels of obesity and related ailments may be part of the problem.

“You are helping, but for those of you who are not taking the crisis seriously I am asking you to do a better job,” he told a news conference.

New York City and state have both complained that federal resources have not reached them quickly enough, but Cuomo said Trump responded swiftly to a request he made on Thursday that a makeshift hospital at a Manhattan convention center be allowed to take in patients with the COVID-19 disease. Initially, it was set up to treat only other patients.

More than 25 percent of the 6,058 US coronavirus deaths tallied by Johns Hopkins University as of Friday morning were in New York City. Infections in the United States account for about 24 percent of the more than 1 million cases worldwide.

Many of the fatal US victims were dying alone as medical staff forbade relatives to be with them in their final hours for fear of a further spread of infection.

“There's no way to describe what we're seeing. Our new reality is unreal,” Craig Spencer, the director of global health in emergency medicine at New York's Columbia University medical center, wrote on Twitter on Thursday night.

He described tents set up outside hospitals to help contain an increasing influx of patients. “In those same tents, I saw too much pain, loneliness, and death. People dying alone.”

In New Jersey, Governor Phil Murphy ordered that all flags be lowered to half-staff for as long as the emergency remains in effect to honor those lost to the coronavirus. He said New Jersey, which has more than 29,000 cases, was the first state to take such a measure.

Fresh data on Friday highlighted the economic consequences of the pandemic, confirming that hundreds of thousands of Americans had lost their jobs because of the pandemic. Economists say the real figure is far more than that because huge swaths of the US economy began shutting down last month to avoid spreading the virus.

“What we are watching in real-time is the greatest bloodletting in the American labor market since the Great Depression,” said Joe Brusuelas, chief economist at RSM in Austin, Texas. levant