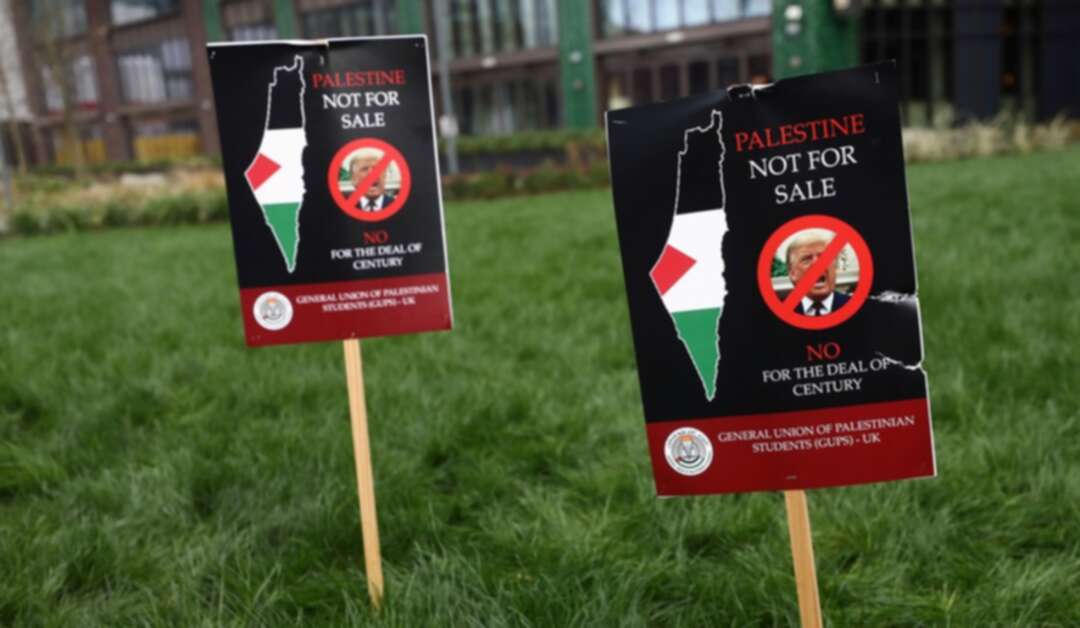 Protest signs are stuck into a lawn during a demonstration against US President Donald Trump's Middle East peace plan in London. February 1, 2020.

US President Donald Trump’s much-touted peace plan for Israel and Palestine will not outlive him, Iranian Supreme Leader Ali Khamenei said, after the deal was universally rejected throughout the Muslim world.

“The American plot of the ‘Deal of the Century’ will die before Trump dies,” Khamenei wrote on his official Twitter account on Wednesday.

Iran's supreme leader earlier blasted the plan as “devilish and vicious,” and said that Muslim nations will never allow it to be implemented.

Trump has been promising to produce a workable solution to the Israeli-Palestinian conflict since he was elected president in 2016, and finally revealed the proposed roadmap in late January with much fanfare. The plan envisaged the creation of an “independent” Palestinian state with a capital in the outskirts of East Jerusalem, currently controlled by Israel.

The deal, however, rules out the two key demands of the Palestinians – the return of all Palestinian refugees and the removal of Israeli settlement in the occupied West Bank, which the UN considers illegal and an obstacle to creating a viable Palestinian state.

he deals was predictably endorsed by US ally Israel and blasted by the Palestinian leadership. The ‘deal of the century’, as the Trump administration dubbed it, was then rejected by the Arab League and the Organization of Islamic Cooperation, which comprises 57 Muslim-majority countries.

Trump’s senior advisor and son-in-law Jared Kushner, who was one of the masterminds behind the proposed roadmap, argued that the Palestinians should accept the plan as a starting point for further talks if they want to be “realistic.” He said that the Palestinians can propose changes to the borders laid out in the deal as well.