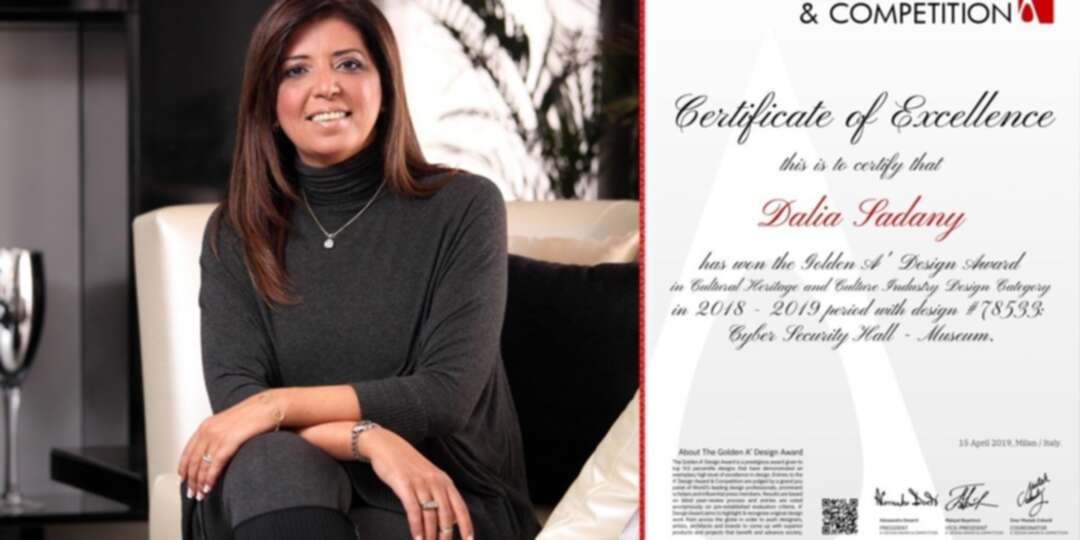 Dalia Sadany, AKA "the International Ambassador of Design", received the Golden Award in the International "A'Design Award & Competition" in Italy for the first qualitative museum located in her latest project at the Greek Campus at the American University in Cairo, which embodies her latest discovery of a new mystery of the ancient Egyptians; that they were the first to establish the idea of knowledge security and everything related to this science of the to date highlighted topic of information and its protection known as ( IT Security).

A' Design Award & Competition is one of the World’s largest annual juried design competition that honors best designers, architects, and design oriented companies worldwide; where a large number of designers almost 13,000 compete in more than 105 design fields from around the world.

Architect Dalia Sadany is a frequent name in the international community concerned with the arts of architecture and decoration; she has been able to highlight the Egyptian traditions in the form of authentic architectural art, to contribute to raise the global image of Egypt's civilization by value, radiance and brilliance, Sadany has held with pride the named Egyptian Architects successfully both locally and internationally.

Dalia expressed her pleasure in receiving this award for her museum, through which she has proved that any of the modern sciences nowadays has their roots since Pharaohs, noting: "This museum was not easy to proceed but served as a challenge and incentive for every Egyptian to know more about his /her history, I did a lot of research and studies, which we documented in Arabic and English assisted by a number of Egyptologists and IT experts who assisted me to build a full comparison and study of the origin of information security in Egypt. Our ancestors were the first to discover the importance of information security and ways to protect it, whereas we found several similarities, including Firewall, Deep Web, Password, Anti-Virus, Maze concept, Honey Pot and other applications that I was fascinated to find their origins go back to the pharaohs."

In the museum, I present a mural with a drawing of the ancient Egyptian scribe, accompanied by a number of pharaonic signs on the importance of knowledge at ancient Egypt. The inscriptions included phrases such as "Do not magnify your heart about your knowledge, do not fill your heart because you are a scientist", "Discuss with the lout like the acquaintance", "No one has reached the end of knowledge by his knowledge", "Hiding the beautiful speech behind the stone", "So you find him about the girls who are on the quern", Which emphasizes the importance of knowledge among the ancient Egyptians and how holy and grand was the gift of knowledge and education to them.

As well as it encloses words said by the god Thoth, one of the most mystic and glorious Egyptian Gods, the god of knowledge, from the book of the dead, He says: "I am Thoth the clever scribe, the pure hand, the master of purity who exorcises evil, the true writer who hates evil and his pen protects the master of the universe, the Lord of offerings who interprets the writings and his words fixed both banks", this with a large carving of Thoth on the wall.

Although Architect Dalia Sadany has used the style of CNC carvings on steel, where she refused to use stones so as the museum not to be an imitation of the form of the existing temples for the naturals, but she used an Egyptian grey marble different from the traditional sandy colored stones known in ancient Egypt. Dalia also added another mural of god Horus "the god of protection" at the museum, where she quoted from the book of the dead a Pharaonic text of him says: "I am Horus who lives in the light of his sun, I have power in my net, I have strength in my glory, I have wandered in the horizons of the sky, Horus sitting on his father's throne, Horus above the thrones, My face is the face of a sacred hawk. " Of different kinds of minerals.

She also collected all the symbols of protection, which was honores by the ancient Egyptians, and which decorated the walls left to us in temples and tombs, including: the winged scarab, lotus and human hands, Horus eye, the symbol of god Osiris, Isis knot, the pygmy god, the cartouche, the Ankh "key of life", the cobra, the winged sun, the emblem of the pharaonic authority "the stick & scepter", etc., all in one place accompanied by stones from Egypt governorates, to declare the protection of these symbols for each piece of this country and to show the whole place as an amulet of our ancient Egyptian ancestors in a distinctive work of art.

Sadany pointed out that the lighting unit she has set up in this museum is called "Thamoun", presenting eight gods circulating round metal sphere representing the earth. The guardian of the earth, this unit is considered a very distinctive pharaonic lighting unit a master piece by itself. Dalia Sadany affirmed that she is always seeking in her projects to introduce the details of our history to Egyptians and foreigners, especially the pharaonic history, which has been intriguing to the world

Sadany added: "It was my pleasure to discover that our ancestors were the pioneers in the information security systems and the ways to save it, we must always imagine that all that the ancient Egyptians did was to protect their science from thieves. Today, companies protect information from virtual hackers on the internet! So what the West now believes that was their invention, has already been since the Egyptian civilization-thousands of years ago.", so as always believe in one of the most true testimonials about Egypt that I have heard is that Egypt existed then there was history. 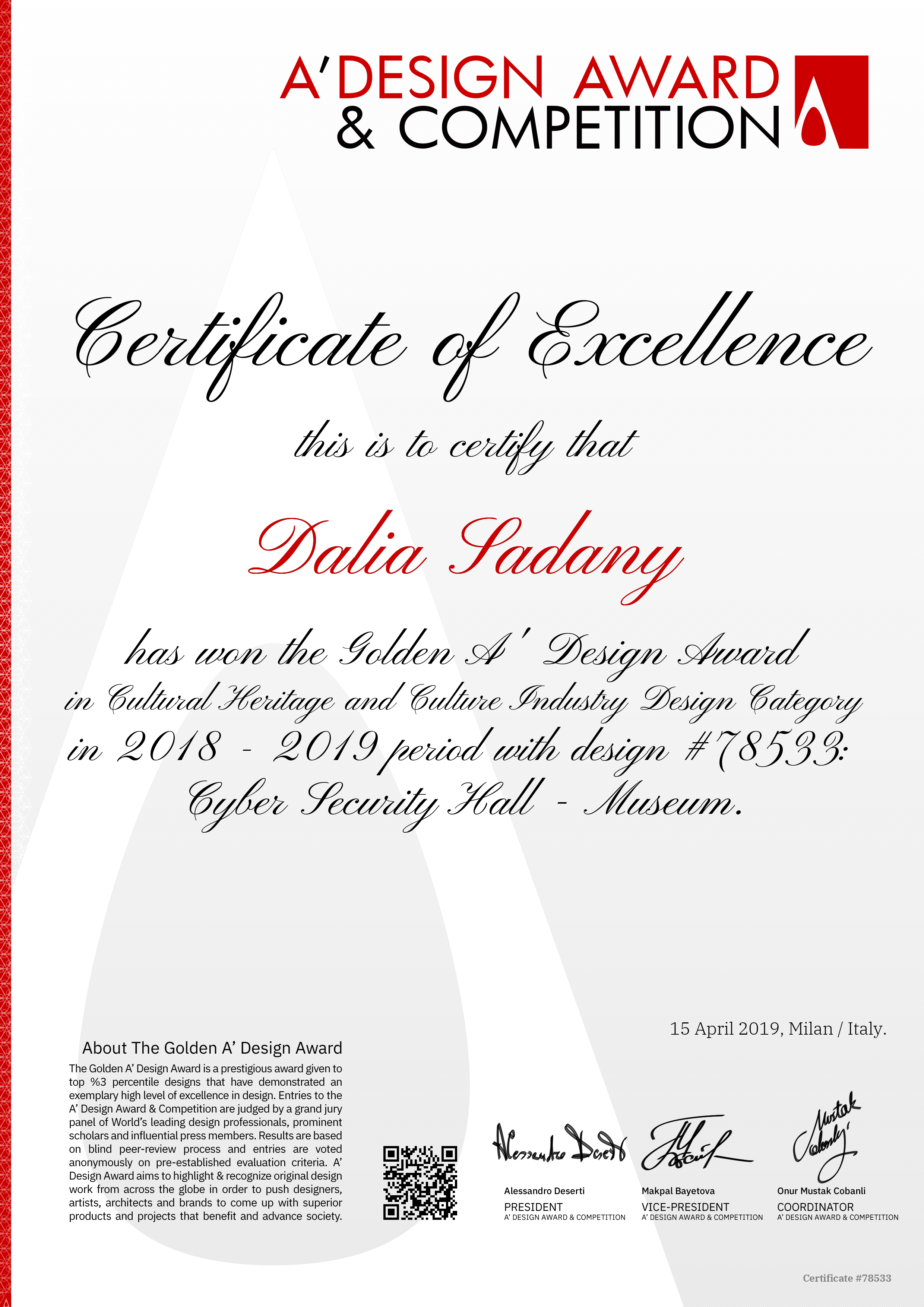 British finance minister Hammond resigns Haftar: We will raise the banner of victory in the heart of Tripoli soon