Protesters in Lebanon continue to call for the resignation of the government, which has failed to provide basic services since at least the end of the civil war in 1990. One major failing has been electricity.

Lebanese citizens suffer daily power cuts – with only those rich enough to own a private generator able to enjoy round-the-clock electricity. Without a generator, daily power cuts vary from three hours in Beirut to 18 hours in some rural areas.

On top of the daily inconvenience, the electricity sector has also become a huge drain on state coffers – in 2018, the state-run utility company Electricite du Liban’s (EDL) deficit was $1.8 billion.

Prime Minister Saad Hariri’s reforms, announced on Monday, included an attempt to reduce this deficit by 1 trillion Lebanese pounds ($663 million), an important measure as the electricity sector is a key contributor to Lebanon’s huge debt - the country’s debt-to-GDP ratio is expected to hit 155 percent by the end of 2019.

Hariri also announced the appointment of regulatory bodies for electricity, telecommunications and civil aviation, and the acceleration of the process for contracting electricity power plants, now to be completed within four months.

Further reassurances came from the Minister for Energy and Water Nada Boustani, who tweeted on October 21 that her ministry has adopted the highest standards of transparency and was working to provide electricity to citizens as soon as possible.

Despite the announcements, electricity shortages are still widespread across the country and have driven people to the streets.

The generator services needed to plug the gaps from the EDL supply are often costly, and in some cases more expensive than government-supplied electricity bills.

Tatiania Hallab, 29, told Al Arabiya that her family’s EDL bill is around $50, but her generator bill is an additional $200 a month.

“It’s a big impact, because the monthly salaries here — the minimum salaries are very low, in comparison to Europe or the US,” said Hallab, whose family are based in Metn, just north of Beirut. “So let’s say you get paid $1,000 , $250 goes just to electricity. Well, that’s just too much,” she added.

Another woman, Olfate, a teacher from Beirut, said her family paid a combined bill of over $100.

Though generators are supposed to be metered, following a government order in October 2018 to reduce corruption in the unofficial sector, some remain unmetered.

“There are people in the area who monopolized the generator electricity,” Ali, a 48-year-old from Beirut’s southern predominantly Shia Dahieh neighborhood said.

Ali also pointed to the alleged dollar shortage – the Lebanese currency is pegged to the US dollar – as further compounding electricity problems. The alleged shortage of dollars has further strained the economy, spawning a black market exchange with higher rates than the official peg.

“Electricity cuts for six hours, then comes back for four, then cuts for six. And when the governmental electricity comes they keep the motor running to bill us higher. The costs have gotten higher because of the dollar shortage,” said Ali. 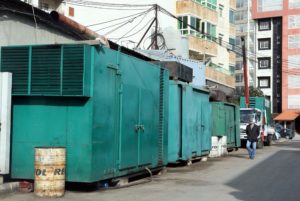 Other reports highlight much deeper problems than the recent dollar shortage.

According to the International Monetary Fund’s most recent report on Lebanon, previous plans to address problems in the electricity sector have all faltered. In April 2019, the MoEW issued a new policy paper that aimed to fix the ailing sector.

“Authorities need to ensure that the current plan is effectively implemented, notwithstanding resistance from vested interests,” said the IMF. “The electricity plan must not be delayed, including a

But experts are skeptical the most recent plans announced by Hariri can stay on track.

The government has said that EDL would break even from its debt as soon as 2021, an optimistic policy which Lebanon-based electricity expert Jessica Obeid described as “fast-tracked.”

“The one thing we know across all sectors is that delays are common, especially in the electricity sector, but the government is betting there won’t be delays,” she added.

In an effort to move away from the government solely managing the sector, new infrastructure projects were designed under various public-private partnership schemes. So far, most contracts that fall under the updated policy paper have faced delays and no infrastructure has materialized.

In a country where sectarianism has seeped its way into every corner of society, the electricity sector is no different.

In September 2018, the Turkish company, Karadeniz, offered Lebanon free electricity for the summer from a floating power barge, in hopes the government would extend a contract for two of its other power barges. However, bickering across Shia, Christian, and Druze sectarian areas ensued over where the barge would be docked, resulting in the project being scrapped.

“We had options … But it seems every time there is a solution, something happens and the solution doesn’t take place,” said Roger Nawfal, a French-Lebanese man who flew from France to take part in the protests.

Nevertheless, these current protests have remained largely non-sectarian, with anger at the electricity situation one of the many unifying demands. When asked if the price of electricity made it difficult to live in the country, Olfate said: “Of course it does - for the majority of Lebanese.”