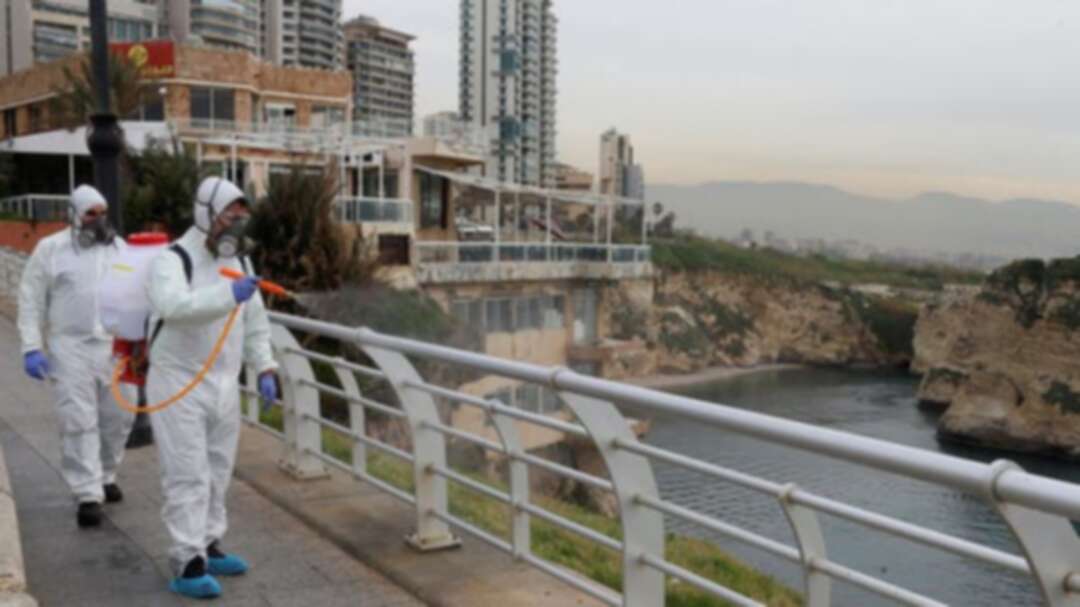 Employees from a disinfection company sanitize handrails, as a precaution against the spread of the coronavirus, at Beirut's seaside Corniche, Lebanon. (File photo Reuters)

The fate of Lebanese citizens stuck overseas – particularly that of cash-strapped university students in Italy and other countries where the coronavirus situation has become disastrous – has become a hot-button issue among Lebanese political leaders since Beirut’s airport closed to commercial flights on March 18.

On Tuesday, officials approved an initial version of a proposal that could allow Lebanese stuck abroad to return home within a week. Coronavirus: Lebanese

While some have raised concerns about the health implications of bringing citizens home from countries with major outbreaks, the prospect of return will come as a relief to many Lebanese abroad, who have been hit by the double misfortune of banking restrictions and quarantine.

They include 20-year-old Khaled Kassem Kassab, who is in his first year studying car design at the Istituto Europeo di Design in Turin, Italy and has been quarantined for a month in his dorm building.

Opening his fridge to inspect the contents, Kassab told Al Arabiya English, “I don’t have water, only milk. I have some cheese, I have pasta. There’s no rice anymore, there’s no vegetables even…So, from now until I go to Lebanon, it’s only pasta that I need to eat.”

On Friday, Prime Minister Hassan Diab had said that Lebanese expatriates would be able to return home only following the April 12 lifting of the countrywide lockdown, prompting Parliament Speaker Nabih Berri to threaten to withdraw members of his party from the government unless the ex-pats were brought home.

Hezbollah leader Hassan Nasrallah, in a speech Saturday, also called on the government to secure the return of the Lebanese abroad.

“It is the right of Lebanese citizens abroad, whether students, travelers or expatriates, to return to Lebanon,” he said. Coronavirus: Lebanese

In its current form, the proposal would allow returns beginning from April 5. The returnees would be required to undergo medical examinations before traveling and to sign a pledge to self-quarantine upon arrival. Minister of Information Manal Abdel Samad Najd said that the plan was approved “provided that some detailed amendments are made.”

The Foreign Ministry had already begun collecting information from Lebanese citizens wishing to come home. As of Tuesday, Foreign Minister Nassif Hitti announced that some 20,000 people had registered their names.

Many of them, like Kassab, had already been struggling before the coronavirus hit, as a result of Lebanon’s currency crisis, which has led to draconian bank limits on withdrawals and credit card charges.

The first two weeks of the lockdown after coronavirus struck, he said, “I didn’t have any money to buy supplies and food because there was a limit on my card.”

Now, although the bank has raised his spending limit, Kassab said he’s afraid to spend too much money on supplies – if he can get to the store. The supermarket close to him is open only on Mondays from 8 a.m. to 1 p.m., and there is often an hours-long line to get in. Coronavirus: Lebanese

Kassab is anxious to get home to his family as soon as possible. But others are still unsure.

Christophe el-Hajj, 24, a master’s student of management engineering in Milan, said his landlord had allowed him to delay his rent payment and that he had so far been able to get by with the money he had. Hajj said he is concerned that the trip to Lebanon would also put him at more risk, given that he would have to venture on public transportation to the airport.

“The people who are not able to sustain themselves, for sure they want to go back at any cost, but others, like in my case, we are still waiting to see how things will go,” he told Al Arabiya English. “And also maybe we’re thinking it might be risky for the country and our families if things were not organized in a good way.”

With his roommate having departed for his home in southern Italy before the lockdown, Hajj said the main thing chafing at him is the isolation.

“Maybe if I had someone with me in the apartment, it would be much easier, and maybe I would never consider taking the risk and putting my family also at risk,” he said.

Italy is not the only country where ex-pats abroad are facing issues. In the United States, the Lebanese embassy in Washington posted on Facebook, “We are receiving reports about cases of Lebanese students or citizens without funds or shelter” and has been collecting aid for those in need. Coronavirus: Lebanese

Also on Tuesday, Lebanon’s Cabinet agreed to provide financial assistance of 400,000 Lebanese lira ($264 at the official exchange rate) to the families most in need in the country, many of whom are suffering more from losing work as a result of the quarantine. The funds will be distributed through the Lebanese Army.