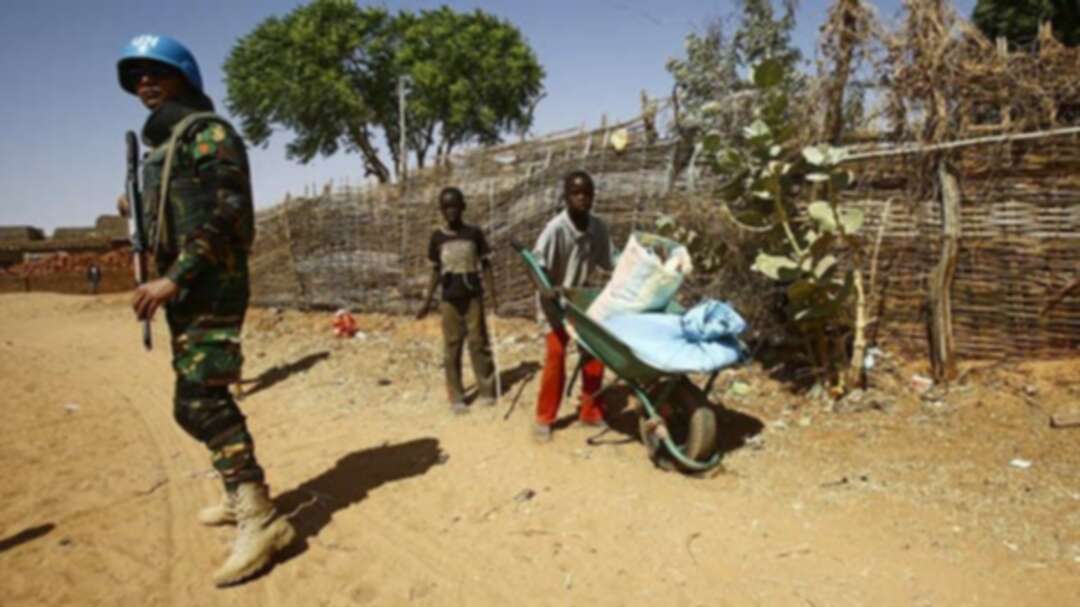 Sudanese boys push a wheelbarrow past a United Nations peace keeper at the El-Riyadh camp for internally displaced persons (IDP) in Geneina, the capital of the state of Sudan's West Darfur, on February 8, 2017. (AFP)

A force from the Arab Rizeigat tribe killed 20 people in an attack on the village of Saadoun inhabited by the Fallata tribe using vehicles, motorcycles and camels,” said tribal leader Mohamed Saleh.

Monday’s violence came after the killing of at least 83 people in clashes between Arab and non-Arab tribes over two days in Sudan’s West Darfur state.

The violent clashes in the two states come just over two weeks after the United Nations and the African Union ended their long-running joint peacekeeping mission in the vast Darfur region.

Sudan has been undergoing a fragile transition since the April 2019 ouster of president Omar al-Bashir following mass protests against his autocratic rule.

The civilian-majority administration installed after Bashir’s ouster has been pushing to stabilize regions beset by deadly conflict during his time in power.

In October, the government signed a landmark peace deal with the main rebel groups, in a move that observers hoped would end fighting in conflict zones including Darfur.

Only two groups refrained from signing the peace deal, including one with considerable support in Darfur.

The conflict -- which left roughly 300,000 people dead and 2.5 million displaced -- has subsided over the years but ethnic and tribal clashes still flare periodically.

These clashes largely occur between nomadic Arab pastoralists and settled farmers from non-Arab ethnic groups over land ownership and access to water.