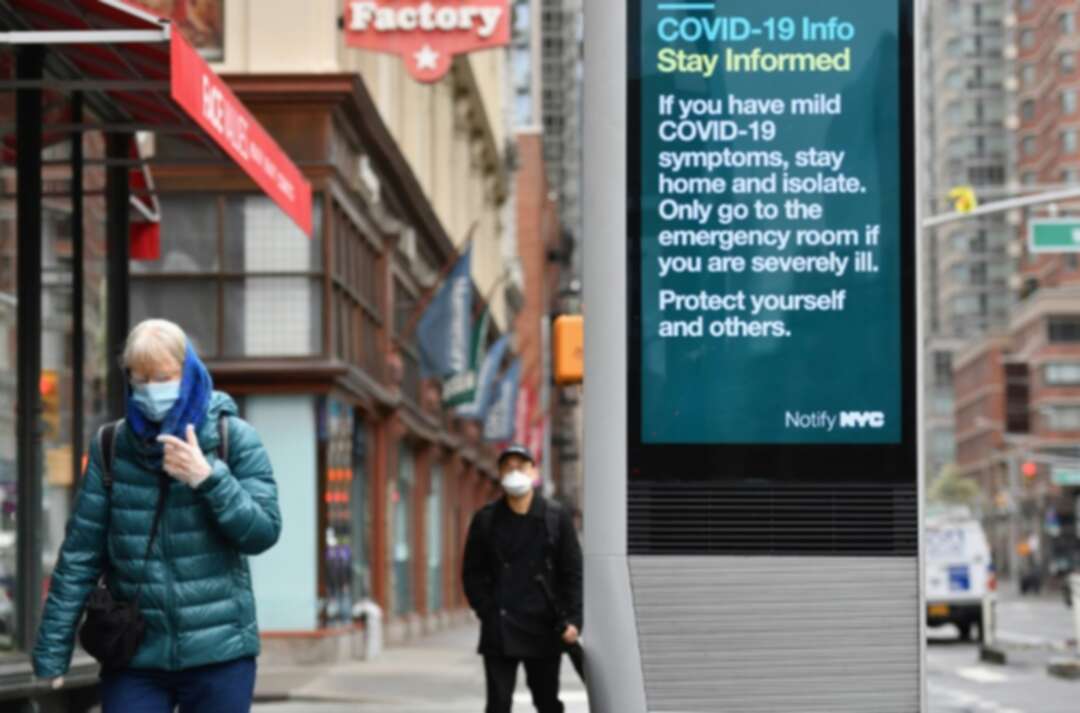 Officials in New York, the worst affected part of the US, began advising people to wear masks some days ago, and there were signs on the streets that the advice was being heeded File photo AFP

China paid homage Saturday to victims of the coronavirus in the place where the global pandemic began, as Americans were warned to wear masks amid fears the disease can be spread by breathing. China

The advice came as America logged another huge rise in its death toll -- almost 1,500 in one day -- and as new infections continued unabated.

China, which appears to be over the worst of its outbreak, on Saturday held a national day of mourning for its dead -- well over 3,000 people have died since the virus emerged there late last year.

Cars, trains, and ships sounded their horns, and air-raid sirens wailed, as flags were flown at half-staff from 10 am (0200 GMT).

Beijing has said the observance is a chance to mourn virus "martyrs" -- an honorific title bestowed by the government this week on 14 medical workers who died fighting the outbreak -- including the man who was punished by officials for raising the initial alarm. China

"I feel a lot of sorrow about our colleagues and patients who died," said Xu, a nurse who worked on the front lines in the central city of Wuhan, where the virus was first detected.

"I hope they can rest well in heaven."

While there are signs of normality returning in some parts of China as movement restrictions are eased, large swathes of the world remain in dire straits.

Europe accounts for the lion's share of the dead, with Italy and Spain bearing the brunt.

But the situation is rapidly deteriorating in the United States, and President Donald Trump's administration on Friday suggested widespread use of simple masks or scarves might help stem the rocketing infection rate. China

"It's going to be a voluntary thing," Trump said. "You don't have to do it and I'm choosing not to do it, but some people may want to do it and that's okay."

Anthony Fauci, head of infectious diseases at the National Institutes of Health, cited "recent information that the virus can be spread even when people just speak as opposed to coughing and sneezing."

The World Health Organization has been more cautious, saying the airborne threat was only known to occur during certain medical treatments.

The US recommendation will likely worsen an already severe shortage of masks in the United States and Europe, which both rely heavily on imports from China.

Officials in New York, the worst affected part of the US, began advising people to wear masks some days ago, and there were signs on the streets that the advice was being heeded.

"I am trying to protect me and my family. If everybody protects themselves, it's better for all of us," Eddie Marrero, a 58-year-old handyman, told AFP.

Around 278,000 Americans have tested positive for the disease, and the infection curve shows no sign of flattening, despite nine in 10 citizens living under some sort of lockdown. China

Field hospitals are sprouting in convention centers, sports arenas and parking lots all over the country as states gird for an expected influx of patients.

Spaniard Javier Lara survived after being put on oxygen in an overcrowded intensive care unit -- a shock to a 29-year-old who was athletic and does not smoke.

"I was panicking that my daughter would get infected. When I started showing symptoms, I said I wouldn't hold her or go near her," he said, describing facing death with an eight-week-old as the "worst moment" in his life.

But there were also signs the peak may have hit on the continent.

Hardest-hit Italy recorded 766 new deaths but its infections rose by just four percent, the lowest yet, according to the civil protection service.

"It's true that the latest figures, as high as they are, give us a little bit of hope, as the growth in new infections is slower than it was a few days ago," said Chancellor Angela Merkel of Germany, where strict social distancing measures are credited with curbing the spread.

"But it is definitely much too early to see a clear trend in that, and it is certainly too early to think in any way about relaxing the strict rules we have given ourselves," she added.

There was, however, yet another warning over the fate of the less developed world, especially conflict zones or places with large refugee populations.

"The worst is yet to come," UN Secretary-General Antonio Guterres said, referring to countries such as Syria, Libya, and Yemen. "The COVID-19 storm is now coming to all these theaters of conflict." China

The world economy has been pummelled by the virus and associated lockdowns, with millions more people signing on for unemployment payments in the US.

Financial ratings agency Fitch predicted the US and eurozone economies would shrink this quarter by up to 30 percent and the Asian Development Bank warned the global economy could take a $4.1 trillion hit -- equivalent to five percent of worldwide output.

Latin America is heading into a "deep recession" with an expected drop of 1.8 to 4.0 percent in GDP, according to the UN. levant

Coronavirus in US: Americans urged to wear masks outside as pandemic worsens Coronavirus: US accused of outbidding, blocking supply shipments after signed deals