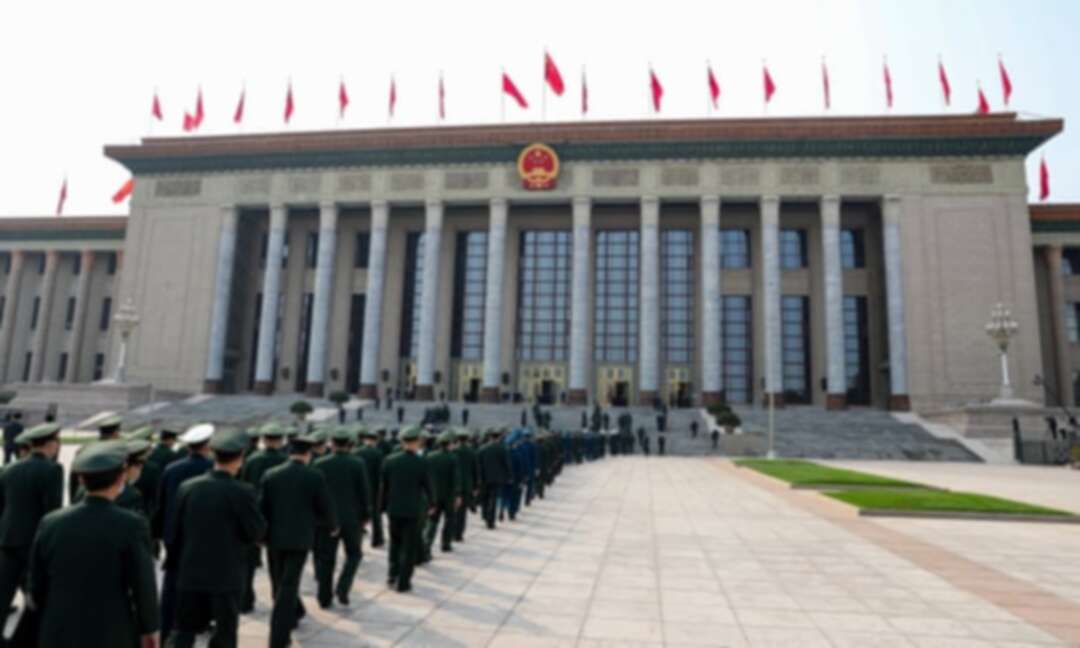 Soldiers and armed police walk into the Great Hall of the People in Beijing.

The foreign secretary, Dominic Raab, said China was here to stay and pointed out no other country was taking the kind of strident economic measures against China that hawks were advocating. “It would not be feasible to go into some old, outdated, cold war with China,” he said

He said China was sensitive about its reputation, but admitted there was no firm evidence yet that it had been influenced by criticism from abroad, save at the margins. He insisted the UK was not seeking a free trade agreement with China any time soon, but that it was essential for the UK to cooperate with China on issues such as climate change, described in the review as the UK’s number one international priority.The balance in the approach to China, reflecting the Sinophile views of the prime minister, Boris Johnson, is likely to attract Tory backbench criticism, with a cross-party alliance on China claiming the strategy is “full of contradictions, dual standards and inconsistencies”. The parliamentarians claim the review’s call for closer trade and economic links is in direct contradiction to the report’s claim that China represents the biggest state-based threat to UK security.

The review’s authors insist the report is not one long apology for Brexit, but an attempt to site Britain as a nimble, agile problem-solving nation supporting open democracy and working closely with Nato, the US and aware of the continuing threat posed by Russia. “We will sit at the heart of a network of like-minded countries and flexible groupings, committed to protecting human rights and upholding global norms. Our influence will be amplified by stronger alliances and wider partnerships – none more valuable to British citizens than our relationship with the United States.”In a sign of the perceived growing threats, the review will lift the cap on the number of Trident nuclear warheads Britain can stockpile by more than 40%, reversing 30 years of gradual disarmament since the collapse of the Soviet Union. The lifting of the cap paves the way for a controversial £10bn rearmament, in response to perceived threats from Russia and China.

Asked why the UK might increase its warhead count, Raab said: “Because, over time as the circumstances change and the threats change, we need to maintain a minimum credible level of deterrent.

“Why? Because it is the ultimate guarantee, the ultimate insurance policy against the worst threat from hostile states.”

Campaigners warned the UK was at risk of starting a “new nuclear arms race” at a time when the world was trying to emerge from the Covid pandemic. Kate Hudson, the general secretary of the Campaign for Nuclear Disarmament (CND), said: “With the government strapped for cash, we don’t need grandiose, money-wasting spending on weapons of mass destruction.”

The review pledges to return to the commitment to spend 0.7 % of gross national income on overseas income, but sets no timetable for doing so. In interviews, Raab repeatedly avoided giving a commitment to hold a Commons vote on the cut, as some say he is legally obliged to do, saying only that ministers would not break the law or else they would be subject to judicial review. The pledge to return to 0.7% at a later date is not new, although it has been presented by Downing Street as a concession to rebels.

“That’s not going to happen. On the contrary I expect China’s Communist party to double down on its ideology in the future.

“There’s going to be an ideological divergence between us in the future, that’s going to generate rivalry and reduce trust.”