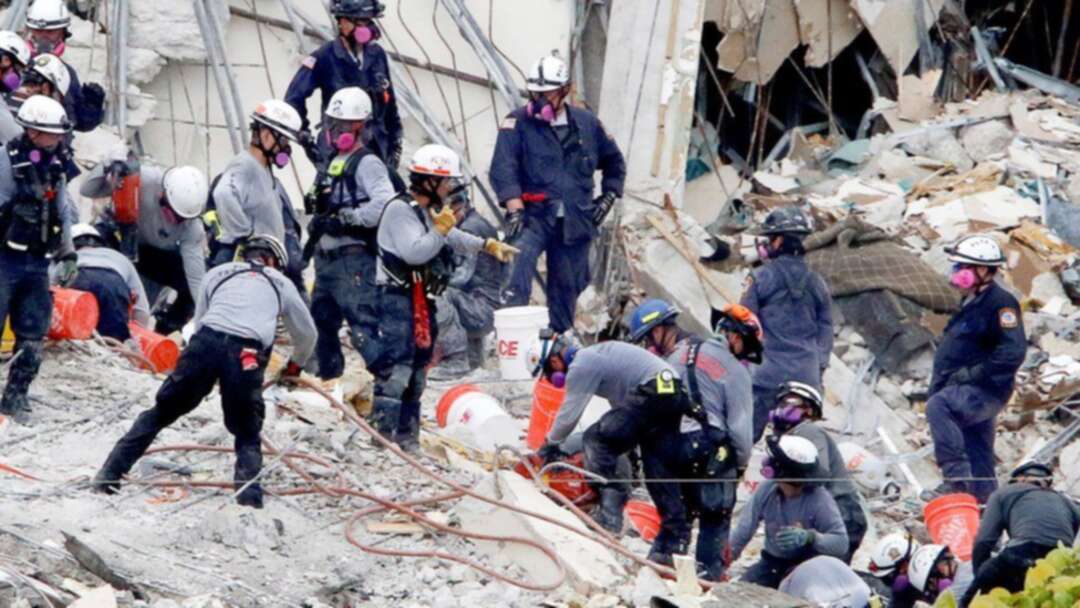 BBC reported that rescuers say the bodies of two children have been found in the rubble of a collapsed Florida tower block, raising the known death toll to 18.

Nobody has been pulled alive from the disaster site since the structure caved in on Thursday.

Rescue teams have been able to build a ramp for a crane to reach areas of the ruined building that they had not been able to access before.

Nearly 150 people are still missing after the collapse last Thursday.

The latest victims to be found have not yet been publicly identified.

Seven days after the collapse in the town of Surfside, north of Miami, officials say they are still hopeful that some survivors could be found trapped in the debris.

BBC reported rescue teams as saying they are working 12-hour shifts as they comb the rubble, despite sweltering heat and high humidity hampering their efforts.

"They are digging as if there are survivors there. They are still remaining hopeful, but it is indeed a terrible tragedy all around," Lt Gov of Florida, Jeanette Nunez, told BBC World News.

Fresh rescue teams are due to arrive from other states, with severe tropical weather expected to hit the area in the coming days.

As well as bad weather, search and rescue teams have also faced fires and falling debris.

An Israeli team helping with the rescue efforts told CNN it had discovered some tunnels large enough for a person, though most of the debris was "very, very tight."

One family confirmed on Wednesday that the 12th person found dead after the collapse was 92-year-old Hilda Noriega.

They said they had lost the "heart and soul" and "matriarch", but would "get through this time by embracing the unconditional love Hilda was known for".

What caused nearly half of the 40-year-old Champlain Towers south block to fall as residents slept in the early hours of last Thursday remains unknown.

But it emerged yesterday that residents had received a letter in April warning them of worsening structural damage to the building.

Lawsuits are already being filed over the disaster, with the latest accusing the block's building association of "reckless and negligent conduct".

Miami-Dade County State Attorney Katherine Fernandez Rundle said she would convene a special grand jury to examine building safety and "what steps we can take to safeguard our residents" from similar disasters in the future.

US President Joe Biden and his wife Jill plan to visit the scene of the tragedy on Thursday. Miami

William and Harry will meet to unveil a statue of their mother Diana President Putin: Russia continues to develop despite the sanctions