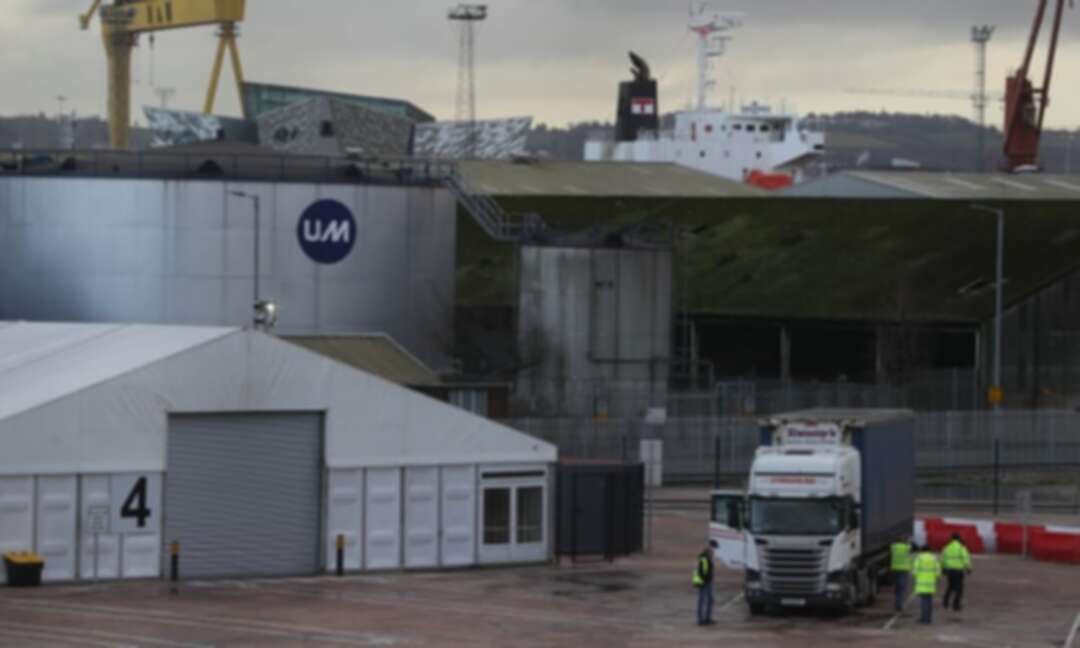 A lorry at a Department of Agriculture, Environment and Rural Affairs checking facility in Duncrue Street, near Belfast port.

The European Union is set to launch a two-pronged legal assault on the UK in the coming days after the British government’s unilateral decision to allow businesses in Northern Ireland more time to adapt to post-Brexit rules.

EU27 ambassadors were briefed on Tuesday on the plans, which are likely to involve initiating a formal “infringement proceeding” that could end up at the European court of justice (ECJ), and triggering the dispute mechanism in the Brexit withdrawal agreement.

The European commission vice-president Maroš Šefčovič told the ambassadors the plans were still being worked on but diplomats said on Wednesday there was full agreement at the meeting that the EU “had to act firmly” and action could begin as early this week.

To avoid a hard border on the island of Ireland, the Northern Ireland protocol, part of the withdrawal agreement, requires checks on goods transiting from Britain to Northern Ireland to make sure they comply with the bloc’s rules.

Some checks have already disrupted supply chains in Northern Ireland, triggering protests from unionist parties, but grace periods – the first of which is due to expire at the end of this month – have so far delayed their full application.

The Northern Ireland secretary, Brandon Lewis, said last week the UK would unilaterally extend the grace periods, arguing that the government had to act to protect the interests of Northern Ireland and keep shelves stocked.

efčovič, the EU’s co-chair of the joint committee overseeing implementation of the withdrawal agreement, subsequently accused the UK of breaching both it and, potentially, international law, as well as a “clear departure” from constructive cooperation.

The commission said it had not been informed of the decision in advance of Lewis informing parliament, and suggested it represented a major blow to trust between the two sides after an already difficult post-Brexit period.

As it did last September when the British government introduced the internal market bill, which it said breached the protocol, the EU is now poised to launch a formal “infringement proceeding” that could ultimately end up before the ECJ.

The commission believes it has established the legal basis for such a step, which would be launched by a formal notice accusing the UK of being in breach of EU law. Britain would have several weeks to respond but could face sanctions or even fines if it did not comply with an ECJ decision.

The commission is also set to send a second letter, this time to the joint committee, accusing the UK of breaching article 167 of the withdrawal agreement, which requires both parties to consult and act in good faith in implementing it, allowing the treaty’s dispute settlement mechanism to be triggered.

The EU’s expected announcement comes amid mounting frustration at what many see as the confrontational stance adopted by Lord Frost, the former UK Brexit negotiator, who has replaced Michael Gove as the UK’s representative on the joint committee.

Frost did not alert Šefčovič that the UK was planning to announce unilateral action last week, and has also upset the bloc with a Sunday newspaper opinion piece urging it to “stop sulking” and get over what he called its “ill will” over the UK’s departure.

The UK has said the EU was informed at an “officials level” and denied breaching international law. A UK government spokesperson said: “These measures are lawful and consistent with a progressive and good-faith implementation of the protocol.”