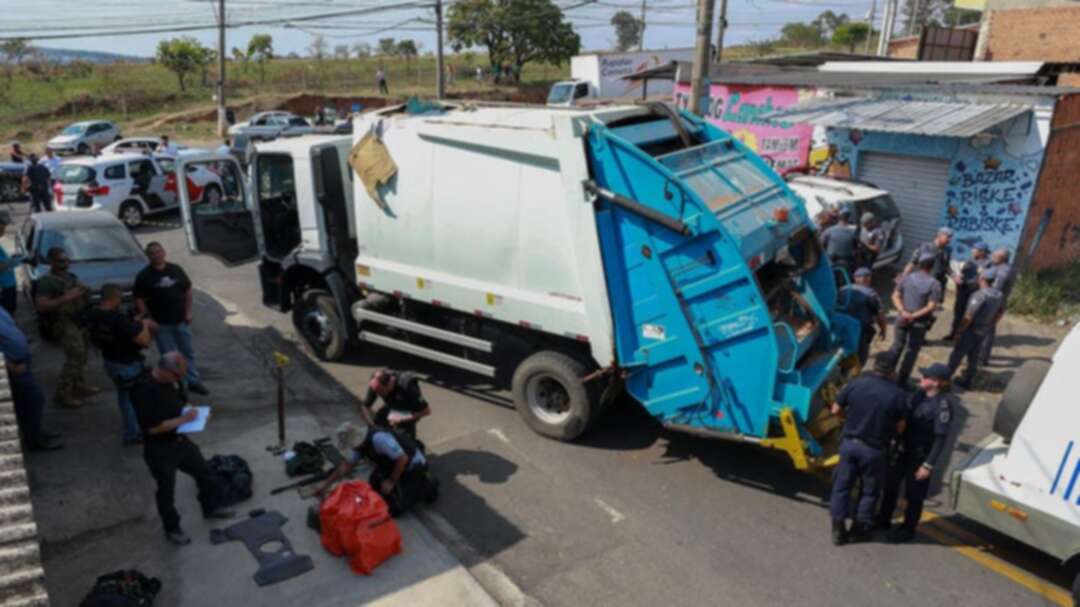 Policemen remain next to guns, money bags and a truck seized to criminals who raided the cargo terminal of the Viracopos International Airport, in Campinas, Sao Paulo state, Brazil, on October 17, 2019. (AFP)

Brazilian police shot dead three suspected armed robbers who broke into an airport terminal and fled with cash on Thursday before blocking a highway by lighting trucks on fire and shooting at security guards and police.

Police said two of the men were killed while fleeing Viracopos International Airport in the city of Campinas, near Sao Paulo, while the third ran into a house and took a family hostage before being shot by a sniper.

More than a dozen suspects had fled the airport in a well-organized heist that involved waiting transport, police said, adding they were still searching for fugitives.

The incident is the second high-profile theft at a major Brazilian airport this year, after armed men broke into Guarulhos airport, the country’s largest, in July and stole $40 million worth of gold.

Two private security guards and a police officer were shot and injured in Thursday’s robbery at Viracopos airport, which is a growing international hub and the principal base for airline Azul SA.

Police did not say how much cash was stolen in the raid on a cargo terminal, before the suspects fled in SUV vehicles to a nearby highway where container trucks, lit on fire, blocked general access.

“Still on the run, the suspects were intercepted by police ... as they abandoned their SUVs and passed cash and weapons into a garbage truck they had prepared,” police said.

Police attempted to negotiate with the man before he placed a gun to the head of the woman, prompting a sniper to shoot and kill him. The woman was hit by shrapnel and is in a stable condition.

Brazilian police have come under the spotlight for a spike in police killings as officials crack down on crime in a country that has one of the highest homicide rates in the world.

Police have defended the increasing deaths, saying officers are finding themselves in more violent confrontations because of a nearly 50% increase in the number of raids, a response to higher crime.

‘We are ready to abide by the ceasefire,’ says Syrian Democratic Forces Erdogan denies ongoing clashes in northeast Syria after ceasefire