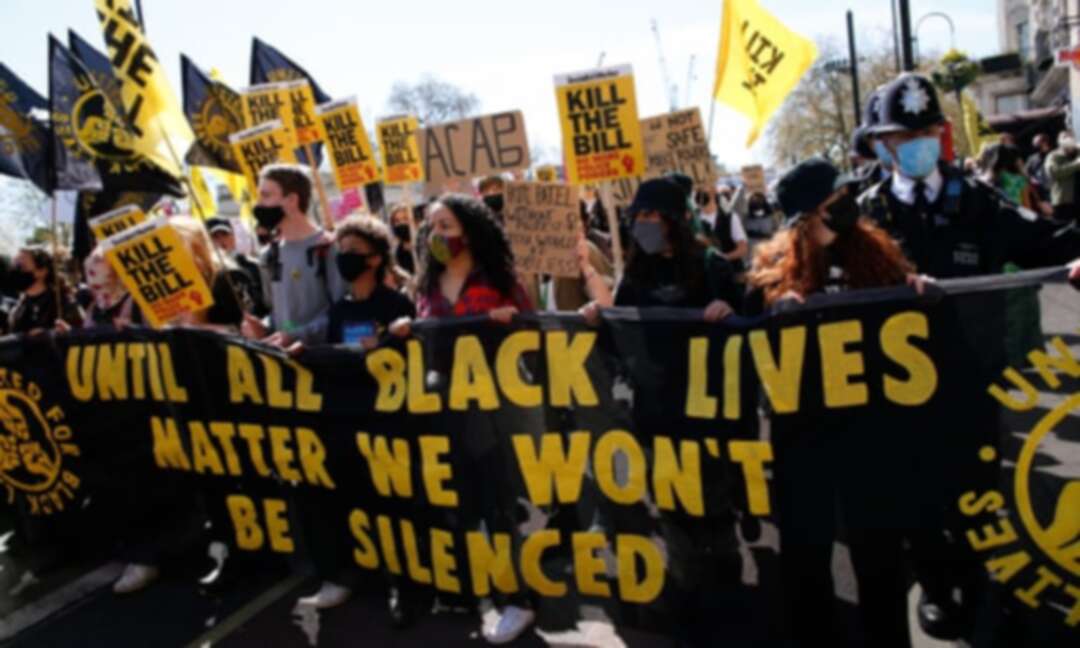 Black Lives Matter supporters at a ‘kill the bill’ protest in London on 17 April.

Black activists say they are alarmed by powers contained in the police, crime, sentencing and courts bill BLM groups

Tens of thousands of people are expected to join more than 40 protests against the police, crime, sentencing and courts bill on Saturday, with black activists playing lead roles in the “kill the bill” coalition.

Protests against the bill, which would grant the police a range of new discretionary powers to shut down protests, are expected in cities from Edinburgh to Exeter on May Day, with the main focus of dissent expected in London.

Organisers hope they will be the biggest demonstration of public opposition to the bill yet. More than 600 civil society and protest groups have called for the government to drop the legislation, and a planned quick passage through parliament has already been delayed.

Among those leading protests have been a number of groups that were instrumental in organising the UK’s Black Lives Matter marches last summer. Recent kill the bill protests in London have been led by BLM banners and have been addressed by a number of speakers aligned to the movement, particularly black women.

Phoen!x Tha Rude Boii, of Black Music Movement, who helped to organise a string of BLM protests last summer, said he felt motivated to begin a conversation among black activists around the crime bill because of persecution he had faced from police due to his activism.

“It’s just playing into that cycle of racism. It’s so obvious how that’s going to be used because it’s up to the police and home secretary to decide what protests are bothering people or not. Obviously 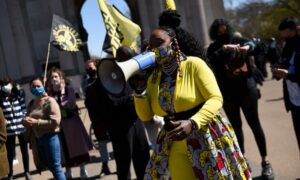 Marvina Eseoghene Newton at a protest in London on 17 April.

Marvina Eseoghene Newton, the founder of United for Black Lives and co-founder of BLM Leeds, said it was important to highlight that a range of activists and activist groups were involved in the movement against the crime bill. She said the leading role played by black women had given the movement an intersectional character that made it inclusive to all groups.

“We think about inclusion more than anyone else, because we know what intersectionality looks like,” said Newton, who compered two recent rallies in London. “The only way we can all be liberated is if we all liberate each other and be the best allies we can be to each other. So I can see my Roma brother and I can see my Muslim brothers and sisters and I can see my trans community and say: you matter, I see the pain.”

Participating in protests has specific risks for black activists, who have sometimes found themselves singled out by police. After one recent rally in Parliament Square, BLM activists issued a statement accusing police of targeting black protesters in an effort to flush them out – targeting that they said was not experienced by white activists.

Aima, of All Black Lives, who has spoken at several kill the bill protests in London, prefers not to give her surname to journalists after a Daily Mail story that outed her as an organiser of BLM protests led to her receiving torrents of abuse. “Especially in this country, when black people speak out about the racism they have suffered from people, British people start getting defensive,” she said.

In her experience, black people better understood the wide-ranging implications of the bill, Aima said. “My problem is getting the white people to listen,” she said. “Because I’m a creator on TikTok, I speak to a lot of leftist creators around the world, and the black people in America that I know are speaking more about this than white leftists in this country.

“Black people will be fearful to go out and protest when this bill passes, because when it passes our voices will not be heard at all.”

In London, protesters are due to gather in Trafalgar Square from midday, with marches beginning earlier in Brixton and Elephant and Castle in south London aiming to join them. In total, 46 kill the bill protests are expected across the UK. BLM groups

Sadiq Khan: British voters will not accept a PM involved in sleaze England Covid rule that ‘turned care homes into prisons’ to be scrapped