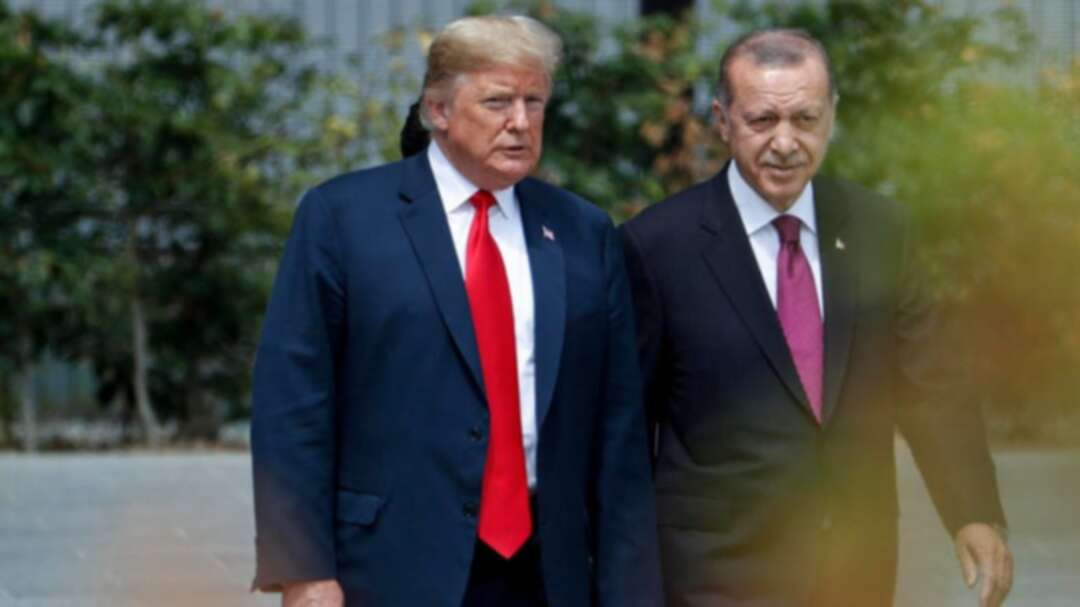 US President Donald Trump (L) speaks to Turkey's President Recep Tayyip Erdogan during the opening ceremony of the NATO (North Atlantic Treaty Organization) summit, at the NATO headquarters in Brussels, on July 11, 2018. (AP)

Fifteen US House Democrats and two Republicans urged President Donald Trump to rescind an invitation he extended to Turkish President Recep Tayyip Erdogan who is set to visit the White House on Wednesday.

In a letter signed by the bipartisan bloc of 17 House lawmakers, they stated that Turkey’s invasion of northern Syria has had “disastrous consequences for US national security,” expressing their “deep concern” over the planned trip.

“President Erdogan’s decision to invade northern Syria on October 9 has had disastrous consequences for US national security, has led to deep divisions in the NATO alliance, and caused a humanitarian crisis on the ground,” the letter to Trump, which was publicly released on Monday, read.

“Given this situation, we believe that now is a particularly inappropriate time for President Erdogan to visit the United States, and we urge you to rescind this invitation,” they added.

The letter also referred to a “long list of disconcerting steps” taken by Turkey, in addition to Syria. This includes Turkey’s purchase of Russian missile defense systems, which Washington says is incompatible with NATO defenses and threatens its Lockheed Martin F-35 fighter jets.

Despite threats of US sanctions, Turkey started receiving its first S-400 deliveries in July.

In response, Washington removed Turkey from the F-35 program, in which Ankara was a manufacturer and buyer.

The US House of Representatives had also passed a resolution recognizing the mass killings of Armenians a century ago as a genocide, which was seen as a strong rebuke against the Turkish government.

In October, Trump had demanded Turkey stop its military incursion in Syria and imposed new sanctions on the NATO ally. In a statement, Trump said he had increased tariffs on imports of Turkish steel back up to 50 percent, six months after they were reduced, and would immediately stop negotiations on what he called a $100 billion trade deal with Turkey.

In an interview on Sunday, White House national security adviser Robert O'Brien said Trump plans to confront Erdogan during his White House visit over the purchase of the S-400 and warned Turkey will “feel the impact” of sanctions if it keeps the platform.

Erdogan and Trump are expected to give a joint press conference shortly after the Turkish president’s arrival at the White House on Wednesday.

On Tuesday, Erdogan said he would tell his US counterpart that Washington must do more to implement a ceasefire deal they agreed in order to halt Turkey’s offensive in Syria.

“I will tell him, with the use of documents, that the agreement we reached on the operation has not been fully implemented,” Erdogan told reporters as he prepared to leave for Washington.