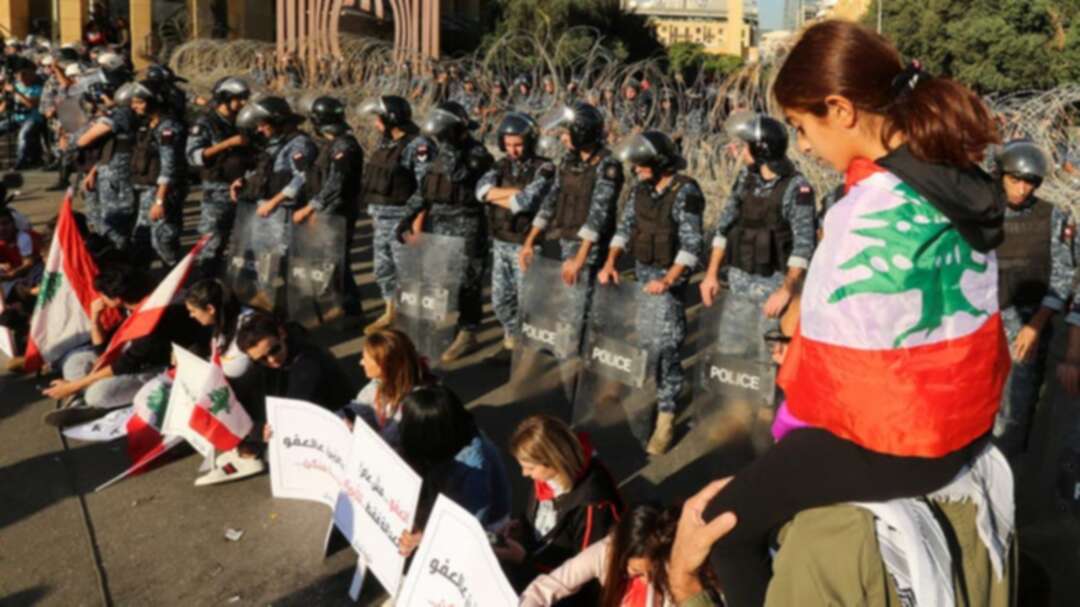 A girl has the national flag draped over her shoulders as riot police stand guard, during the ongoing anti-government protest, in Beirut, Lebanon, November 19, 2019. (Reuters)

The Beirut Airport again raised its currency conversion rates to 1,950 Lebanese lire to $1.

On Twitter, journalist Jacob Boswall shared a photo of the new sign at the airport saying, “Another month, another exchange rate at #Beirut International Airport. A month ago it was 1750

The official peg is 1,500 lira to $1, though due to the country’s deteriorating economic situation, the peg has been under pressure since October, slipping further from the official value. Market exchange rates have hit upwards of 2,000 lire recently.

Fed up with economic conditions in the country, protesters have been on the streets in Lebanon for more than three months calling for a new government, which was recently appointed after former Prime Minister Saad Hariri resigned at the end of October. The new government, headed by Prime Minister Hassan Diab inherits an economic and currency crisis that he and the new cabinet will now set to improve. The new government recently passed a controversial 2020 state budget that will aim to help the ailing economy.

Lebanon is one of the world’s most indebted nations, with a debt-to-GDP ratio of 151 percent, according to the International Monetary Fund.

Banks have tightened their grip since October to prevent capital flight, with capital controls applied unevenly across the sector. With some daily withdrawal limits as low as $200 or $300, dollars have become a hot commodity in the country that relies on dollars to pay for much-needed imports, including food. The small country imports 80 percent of its food, according to data from the Food and Agriculture Organization.

Lebanon’s central bank on January 30 announced it would ease capital controls in the country, allowing for cash withdrawals of up to 25 million lire per month and transfers abroad up to $50,000 per year for “necessary matters.”

of remittances sent from abroad due to slowing economies in places like the Arabian Gulf and South America that are home to large populations of the Lebanese diaspora.

Rights groups urge EU to sanction Iranian TV for airing prisoners’ confessions ‘If I opened the door, he would've killed us’: 15yo says she helped 20+ kids survive Indian hostage horror by hiding in basement