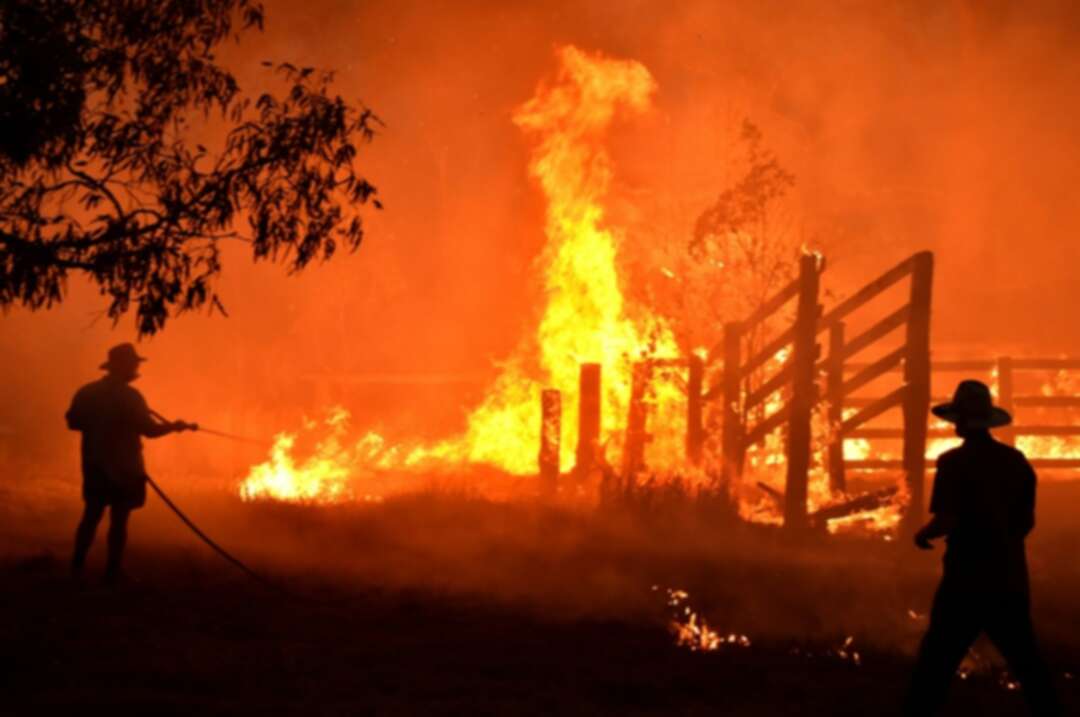 Residents defend a property from a bushfire at Hillsville near Taree. File photo AFP

Bushfires raging across eastern Australia on Tuesday singed the Sydney suburbs, where firefighters were forced to scramble planes and helicopters to splatter a built-up neighbourhood with water and red retardant.

Twin blazes in the north shore suburb of Turramurra -- around 15 kilometres (nine miles) from the centre of Australia's largest city -- tore through a eucalypt forest park and sparked spot fires in homes, before eventually being brought under control.

As night fell, the authorities said they were bringing another "clearly suspicious" blaze in a national park in the city's southern suburbs under control.

Throughout the day more than 300 bushfires burned up and down Australia's east coast, fanned by gale-force winds, scorching temperatures and tinder-dry bushland that has brought some of the most dangerous conditions the country has seen.

In Sydney's Turramurra, gardens smouldered, thick smoke hung heavy in the air and cars, houses and roads were caked in raspberry-red retardant as if hit by a giant paintball.

"It was the embers that floated up that actually went across and set off spot fires in the front yards" resident Nigel Lush told AFP, adding that one roof had been set alight.

"Next thing I know the fire was opposite our house and it was massive and the police came and grabbed our kids and took them away," she said. "My daughter is pretty freaked out."

Firefighter Andrew Connon told AFP "a number of homes were threatened but it was contained by the aerial bombing".

From early morning thousands of firefighters spread out across New South Wales in anticipation of what they called "off the scale" fire risk and "catastrophic" conditions.

They were unable to prevent several bushfires from breaching containment lines and trapping residents who had not already evacuated.

New South Wales Rural Fire Service Commissioner Shane Fitzsimmons said so far only a dozen buildings had been damaged Tuesday and a handful non-life-threatening injuries were reported, but the crisis was far from over.

Firefighters will be "working on these fires for days and weeks given the enormity of the firegrounds," he said.

Experts have described the conditions as the worst on record, as spring temperatures climbed toward 40 degrees Celsius (104 Fahrenheit) and winds topped 80 kilometres (50 miles) per hour across a zone which has been plagued by persistent drought.

Even before unfavourable weather hit, days of fires had killed three people and destroyed at least 150 homes.

"The conditions are expected to get worse," Fitzsimmons said, warning residents in adjacent areas to stay alert.

Up to 600 schools were closed, as well as many national parks, a total fire ban was introduced for the affected area and Rally Australia -- due to be held in Coffs Harbour at the weekend -- was cancelled.

The military pitched in, helping firefighters with logistics and water-dropping sorties using more than 100 aircraft.

In the town of Hillville a fire that has ripped through an area the size of 25,000 soccer fields approached the home of Daniel Stevens.

Like many, his family -- including his mother nursing a broken leg -- have packed their bags but have struggled over whether to leave their house and everything they own.

"We'll fight it first," he told AFP, "but if it jumps the fence line into the paddock, we'll go."

In the nearby town of Taree, dozens of people have already moved to a showground that has become a makeshift evacuation centre.

Fifty-nine-year-old Caroline Watson arrived last night with her husband and their dog.

"The fires are just rife. They are absolutely everywhere" she told AFP. "They didn't ask us to get out, but we figured it was coming."

Further south in the Blue Mountains on the outskirts of Sydney, veteran Winmalee firefighter Alan Gardiner said locals were "terrified and on edge".

The town still bears the scars of a 2013 blaze that destroyed 200 homes, and residents are acutely aware that with few roads in and out of the mountains, a decision to leave too late can be fatal.

Efforts to burn fuel in a controlled way have been limited by months of drought-like conditions that made it too dangerous.

"If there is a fire, it's going to be catastrophic," Gardiner said.

This bushfire season is in its infancy but is already on track to be one of Australia's worst on record.

In New South Wales alone more than a million hectares -- roughly the area of Jamaica -- have already burned, three times more than the whole of the last season.