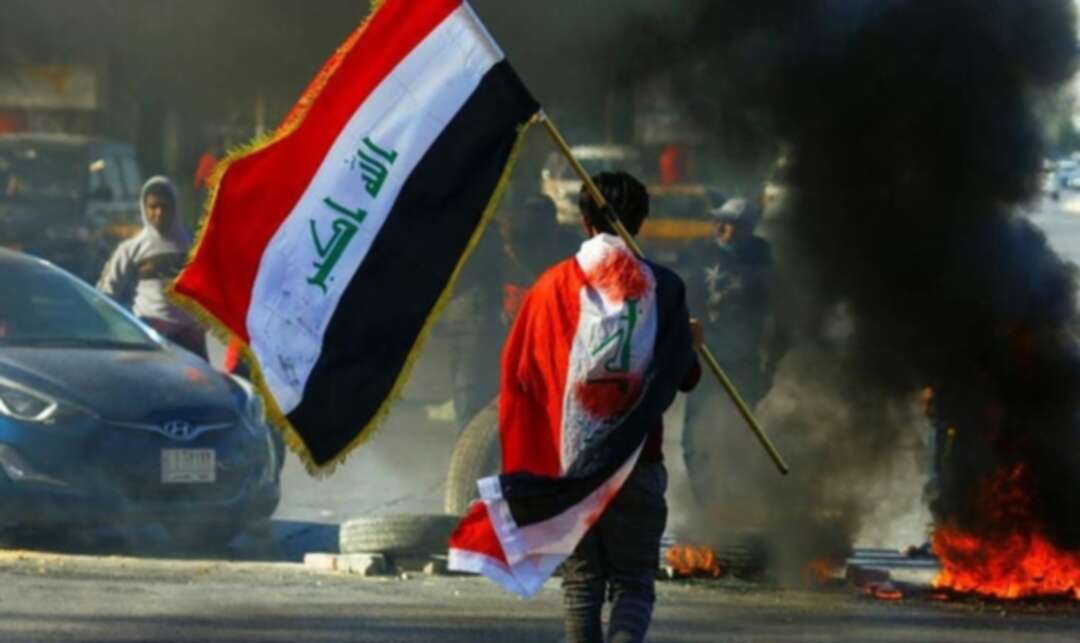 A demonstrator carries an Iraqi flag as he walks near burning tires, during ongoing anti-government protests in Najaf, Iraq, on January 12, 2020. (Reuters)

At least 10 protesters were injured during clashes with security forces in the Iraqi city of Karbala, Al-Arabiya and Al-Hadath correspondent reported citing medical sources.

The clashes were centered in the al-Baladiya neighborhood in central Karbala.

The Iraqi News Agency reported that the Iraqi security forces were trying to disperse protesters who were trying to storm the building of the Karbala governorate.

It added that unidentified persons set fire to a warehouse belonging to the Badr Organization, a powerful Iranian-backed armed group in the Karbala Governorate.

Sources said the warehouse was outside the headquarters of Badr organization.

Earlier on Sunday, anti-government protests continued in different parts of the country, including the city of Nasiriyah in Dhi Qar, a governorate in the south of Iraq, and near Wasit University in the city of al-Kut in Wasit Governorate, where 59 people were injured, including 48 members of the security forces following clashes near the university building.

Anti-government protests were also reported in Najaf, as thousands of students in various universities suspended classes and took part.

In Dhi Qar, the police chief was sacked because of the “chaos” in the province.

Young, mostly Shia protesters said politicians were corrupt and blamed them for Iraq’s failure to recover from decades of conflict and sanctions despite two years of relative calm following the defeat of ISIS.

Government reform has amounted to little more than a handful of state jobs for graduates, stipends for the poor and pledges of election reform which lawmakers have barely begun to discuss.

In another development in Iraq, at least seven mortar bombs fell on Sunday inside Iraq’s Balad airbase, which houses US forces, and five Iraqi soldiers were wounded in the attack, according to military sources.