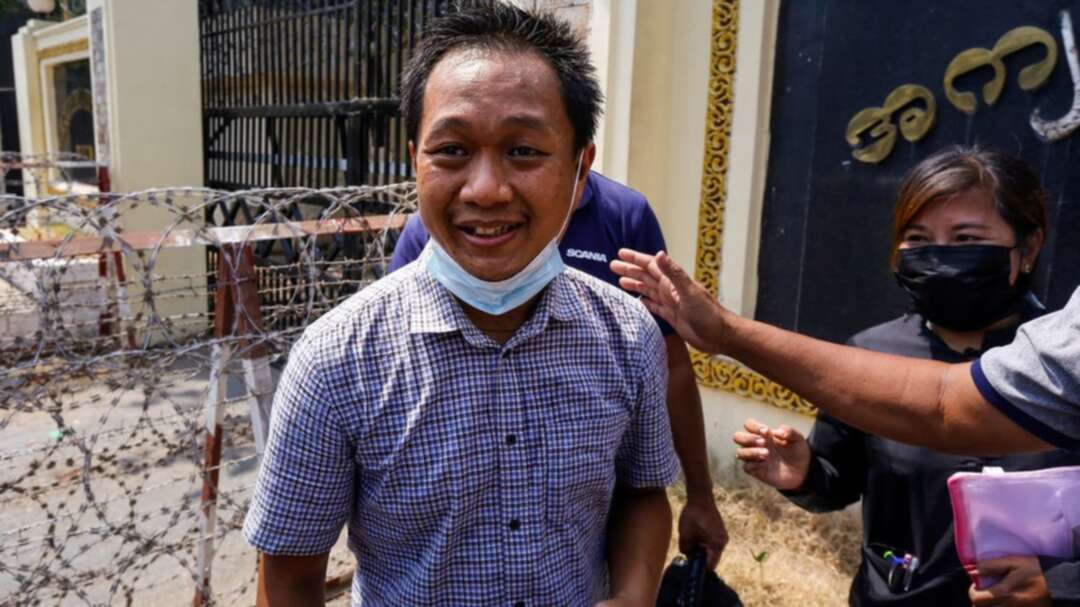 Associated Press (AP) photographer Thein Zaw smiles outside Insein prison in Yangon on March 24, 2021, after being released with coup detainees who had been held for taking part in demonstrations against the military coup. (AFP)

Thein Zaw, a journalist for The Associated Press who was arrested last month while covering a protest against the coup in Myanmar, was released from detention on Wednesday.

Thein Zaw told the AP and his family of his release by phone after his second court hearing since his arrest nearly a month ago.

Speaking as he headed home, he said the judge in his case read a statement in court that all charges against him were being dropped because he was doing his job at the time of his arrest.

“I’m looking forward to meeting my family members,” he said, while expressing concern for other journalists who remain in custody. “I’m sorry for some colleagues who are still in prison.”

Thein Zaw had been charged with violating a public order law that carries a penalty of up to three years’ imprisonment.

He was one of nine media workers taken into custody during the Feb. 27 street protest in Yangon, the country’s largest city, and had been held without bail. About 40 journalists have been detained or charged since the Feb. 1 coup.

The Associated Press and many press freedom organizations have called for the release of Thein Zaw and the other detained members of the press.

“The Associated Press is deeply relieved that AP journalist Thein Zaw has been freed from prison in Myanmar,” said Ian Phillips, AP vice president for international news. “Our relief is tempered by the fact that additional journalists there remain detained. We urge Myanmar to release all journalists and allow them to report freely and safely on what is happening inside the country.”

Thein Zaw was arrested as he was photographing police, some of them armed, charging down a street at anti-coup protesters. A video shows that although he stepped to the side of the street to get out of their way, several police rushed over and surrounded him. One put him in a chokehold as he was handcuffed and then taken away.

He had been kept at Yangon’s Insein Prison, notorious for decades for holding political prisoners, and which currently holds hundreds of people detained for protesting the coup that ousted the elected government of Aung San Suu Kyi.

Thein Zaw’s lawyer, Tin Zar Oo, was only able to see her client for the first time at a hearing on March 12 to renew his pre-trial detention, and even then it was through a video link that she and one of Thein Zaw’s brothers watched at the Kamayut Township court. His next hearing had been scheduled for Wednesday.