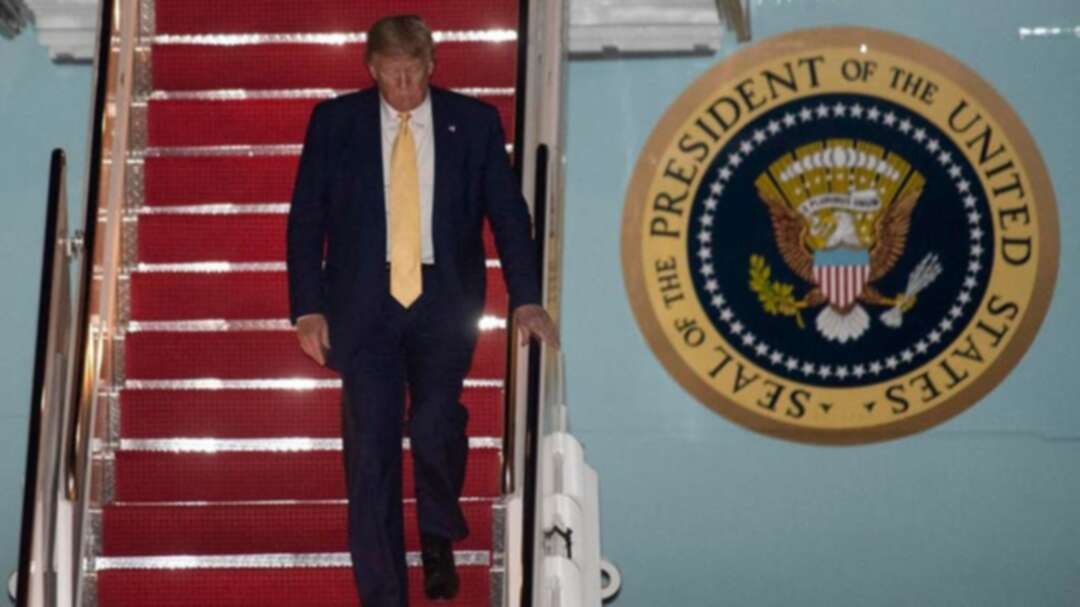 President Donald Trump departs Air Force One early on October 12, 2019, at the Andrews Air Force Base, Md., after returning from a campaign rally in Louisiana. (AP)

President Donald Trump’s administration is set to impose economic sanctions on Ankara, potentially as early as this week, for its incursion into northern Syria, one of the few levers the United States still has over NATO-ally Turkey.

Using the US military to stop the Turkish offensive on US-allied Kurdish fighters was never an option,defense officials have said, and Trump asked the Pentagon on Sunday to begin a “deliberate” withdrawal of all US troops from northern Syria.

On Sunday, Trump said he was listening to Congress, where Republicans and Democrats are pushing aggressively for sanctions action.

“Dealing with @LindseyGrahamSC and many members of Congress, including Democrats, about imposing powerful Sanctions on Turkey,” Trump said on Twitter, referring to the loyal Trump ally and US senator who lambasted the president last week.

“Treasury is ready to go, additional legislation may be sought. There is great consensus on this. Turkey has asked that it not be done. Stay tuned!” he added.

A US official, speaking on condition of anonymity, told Reuters that sanctions were “being worked out at all levels of the government for rollout.”

Trump is struggling to quell harsh criticism, including from some of his staunchest Republican backers, that he gave Turkish President Tayyip Erdogan a green light to attack the Kurds last Sunday when he decided to pull a small number of US troops out of the border area.

Turkey’s offensive aims to neutralize the Kurdish YPG militia, the main component of the Syrian Democratic Forces (SDF) and seen by Ankara as a terrorist group aligned with Kurdish insurgents in Turkey. But the SDF has also been Washington’s key ally in fighting that has dismantled ISIS’s “caliphate” in Syria.

Trump’s decision, rooted in his long-stated aim to get the United States out of “endless wars,” has prompted bipartisan concerns that it opens the door to the revival of ISIS.

While sanctions appear to be the strongest tool of deterrence, the United States and its European allies could also ponder arms sales bans and the threat of war crimes prosecutions.

It is unclear what sanctions are in the order drafted last week, which Mnuchin said was ready for activation at any moment, and whether they would be as severe as what lawmakers are proposing.

Representatives Eliot Engel, the Democratic chairman of the US House of Representatives Foreign Affairs Committee, and Mike McCaul, the committee’s senior Republican, introduced a bill last Friday that would sanction Turkish officials involved in the Syria operation and banks involved with Turkey’s defense sector until Turkey ends military operations in Syria.

It also would stop arms from going to Turkish forces in Syria, and require the administration to impose existing sanctions on Turkey for its purchase of a Russian S-400 missile-defense system.

Turkey’s Foreign Ministry said late on Friday that Turkey would retaliate against any steps aimed at countering its efforts to fight terrorism, in response to the announcement of possible US sanctions against Turkey.

The United States has successfully gone after Turkey with sanctions and tariffs before, hitting Ankara last year to pressure authorities to return an American pastor on trial for terrorism charges.

The United States could look at targeting arm sales to Turkey, something a number of European countries have already done. France said on Saturday that it had suspended all weapon sales to Turkey and warned Ankara that its offensive in northern Syria threatened European security.

The White House could also look at increasing pressure on Turkey over reports of human rights abuses during the offensive, with a threat of war crimes prosecutions.

The United States is looking into reports that a Kurdish politician and captured Kurdish fighters were killed in northeastern Syria amid Turkey’s offensive, a State Department spokesman told Reuters, adding that Washington found the reports disturbing.

In response to the reports, the US official said: “This is awful. All these are among the issues that is addressed by our executive order,” referring to the sanctions.

Experts doubted that any of the US punishments would make Erdogan change his mind, given his long-held belief that the Kurdish fighters in Syria threaten national security and whom Ankara sees as a branch of the Kurdistan Workers Party (PKK).

“This is a monumental failure on behalf of the United States,” said Aaron Stein, director of the Middle East program at the Foreign Policy Research Institute think tank.

Stein said it would be the Syrian government or Russia, not American sanctions, that could stop the Turkish operation.

“The only thing that will stop them is if the regime or the Russians move in in significant numbers to where they stop,” Stein said.

The United States does have one person that Erdogan has long wanted extradited: the US-based Muslim cleric Fethullah Gulen, accused by Turkey of orchestrating a failed 2016 military coup against Erdogan.

US officials have said the courts would require sufficient evidence to extradite the elderly Gulen, who has denied any involvement in the coup and has lived in self-imposed exile in the United States since 1999.

Erdogan sees no issues in Kobani after Syrian deployment, welcomes US withdrawal France says securing military in Syria as US begins withdrawal