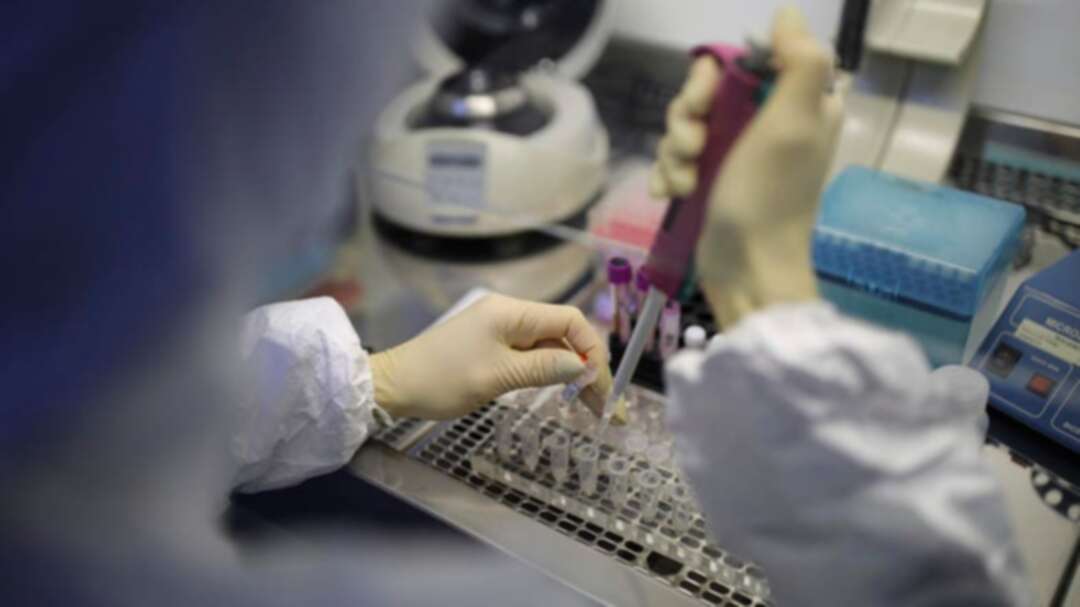 A medical staffer works with test systems for the diagnosis of coronavirus in Krasnodar, Russia on Feb. 4, 2020. (AP)

The number of confirmed cases of the new virus has risen again in China while fatalities increased to 722 on Saturday, as the ruling Communist Party faced anger and recriminations from the public over the death of a doctor who was threatened by police after trying to sound the alarm about the disease over a month ago.

The government announced that another 3,399 people had been diagnosed over the last 24 hours, reversing two days of declines, and raising the total accumulated number of cases on the mainland to 34,546.

Cruise ship passengers faced more woe as Japan reported three more cases for a total of 64 on one quarantined vessel and turned away another. President Xi Jinping spoke with President Donald Trump on Friday and urged the US to “respond reasonably” to the outbreak, echoing complaints that some countries are overreacting by restricting Chinese travelers.

Following an online uproar over the government’s treatment of Dr. Li Wenliang, the Communist Party struck a conciliatory note, saying it is sending a team to “fully investigate relevant issues raised by the public.”

Li, a 34-year-old ophthalmologist, contracted the virus while treating patients, and his death was confirmed early Friday. Li, one of eight medical professionals in Wuhan who tried to warn colleagues and others when the government did not, had said that police forced him to sign a statement admitting he spread falsehoods.

Even the staunchly pro-government Global Times newspaper said the treatment of Li and other whistleblowers was “evidence of local authorities’ incompetence to tackle a contagious and deadly virus.”

The episode has raised longstanding complaints that party officials lie about or cover up disease outbreaks, chemical spills, dangerous consumer products, or financial frauds. Chinese citizens can be jailed on charges of rumor-mongering or making trouble.

Most of the deaths from the virus have been of older people with existing health problems, but disease specialists said Li’s work — eye doctors sit very close to their patients during examinations — may have subjected him to an extra-large dose of the virus that made his illness more severe.

In Japan, three more cases were diagnosed Saturday among 3,700 passengers and crew on the quarantined Diamond Princess. Those aboard remain under a 14-day quarantine.

He said suspected virus patients were on board. The ship, with more than 2,000 people, was near Okinawa and was seeking another port, said Overseas Travel Agency official Mie Matsubara.

“We are getting desperate,” she said. “We hope we can go somewhere so that passengers can land.”

“If you sign this form you will need to stay at home. They also warned me that I can’t go out. I must stay at home for 14 days,” said Jennifer Cheung, who arrived at Hong Kong seaport from Henan.

Hong Kong has refused to completely seal its border but hopes the quarantine will dissuade travelers from the mainland.

The US announced later Friday that it is prepared to spend up to $100 million to help China and other countries fight the outbreak.

The government also said it helped with the effort to deliver nearly 18 tons of medical supplies donated to the Chinese by the American people, including masks, gowns, gauze, and respirators.

All but one of the deaths in the outbreak have been in China. China’s National Health Commission said about 6,101 of those being treated, or nearly 17 percent, are in serious condition. The vast majority of the infected area in China; roughly 290 others are in about two dozen other countries, including Japan, Thailand, Singapore, and South Korea.

The US has reported 12 cases.

Hundreds of more Americans evacuated from the stricken zone in China began arriving Friday in the US, where they will be quarantined on military bases for two weeks.

US citizen dies of coronavirus in Wuhan: Embassy Trump ousts two officials who testified against him in impeachment