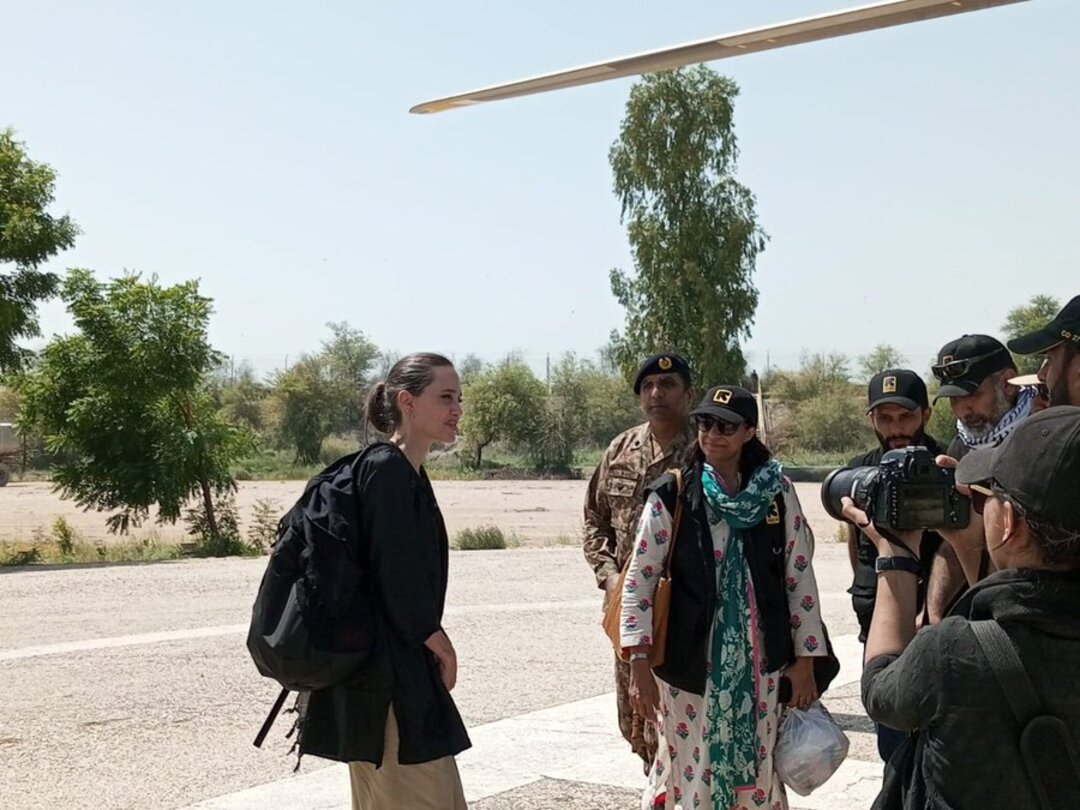 Angelina Jolie in Pakistan today. She’s in Dadu to meet those affected by the floods and highlight the urgent need for help - Twitter account

Angelina Jolie, a top Hollywood actress and special envoy to the UN High Commissioner for Refugees, urged the international community to do more as millions of people are in trouble in the flood-hit areas of Pakistan, the Anadolu Agency reported.

During her visit to the National Flood Response Coordination Centre (NFRCC) late Wednesday, Jolie said that she has never seen anything like this disaster before.

“Many times, I came here because of the generosity that Pakistani people have shown to the people of Afghanistan over the years as a host country. Now this time we see the countries causing less damage to the environment are bearing the brunt of the disaster and the pain and the death,” Jolie said while speaking at the NFRCC.

She arrived in Pakistan on Tuesday to help people impacted by the devastating floods and visited different areas to meet the affected families.

“I am absolutely with you in pushing the international community to do more,” she added.

The top Hollywood actress warned that this disaster is a real wake-up call to the world that climate change is not only real, it's not only coming but it's very much here.

“Now we are in a situation like this, where the needs are so great,” Jolie said, adding she saw people in affected areas in a situation where they need urgent aid, otherwise they won't be here in the next few weeks.

With seven more deaths, the casualties have risen to 1,576 due to flood-related accidents across the country since mid-June, the country's National Disaster Management Authority’s latest data.

So far, over two million houses have been damaged, with 803,400 houses completely destroyed and 1.21 million houses partially damaged. Over one million livestock perished across the South Asian country.

The destructive floods affected millions of people in 81 districts across the country and thousands of them are living in tents.

Monsoon season in Pakistan, like in other countries in the region, usually results in heavy rains, but this year has been the wettest since 1961.

Currently, one-third of the country is under water as the massive rains and melting glaciers have caused the country’s main Indus River to overflow, inundating vast swaths of plains, and farms.

Destructive rains and floods have also washed away 13,093 kilometers (8,135 miles) of roads, 392 bridges and buildings across the South Asian nuclear country, which is already grappling with political and economic turmoil.

Over 33 million of the country's approximately 220 million population have been affected by the raging floods, causing a staggering loss of over $30 billion in damages to an already weakened infrastructure.

Guterres calls for global response to catastrophic floods in Pakistan

Almost 45% of the country's cropland has already been inundated by the floods, posing a serious threat to food security and further adding to the already skyrocketing inflation.