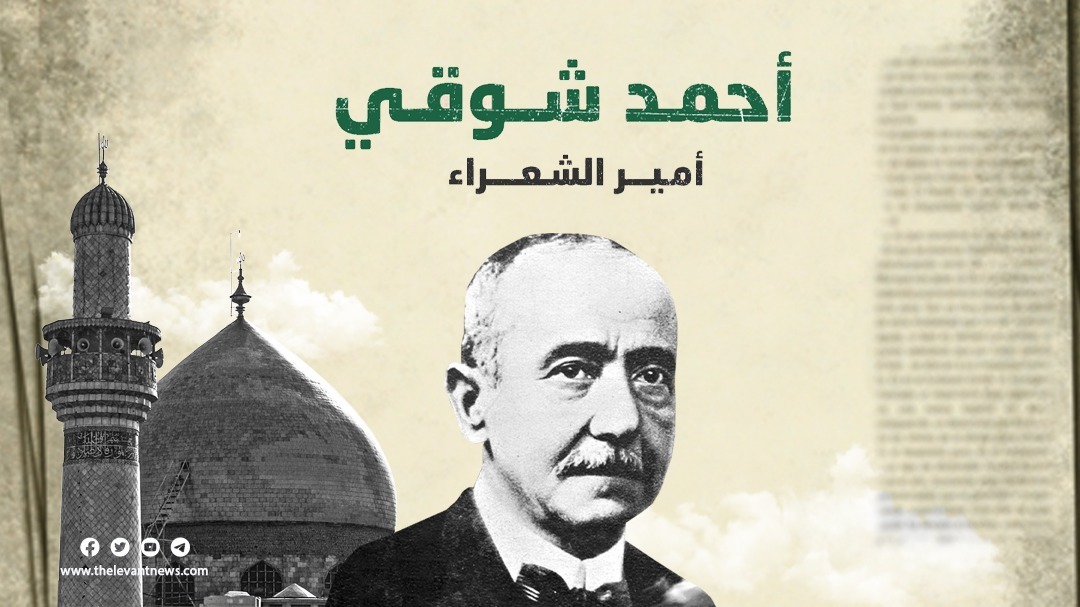 The spread of mediocrity at the expense of the deep content does not mean the brilliant poets and writers whose names are immortalised in the literary and artistic world are forgotten.

One of those names was the Egyptian poet Ahmed Shawqi who was called by many Arab poets in 1927 as "the Prince of Poets" because he was back then the greatest reformer of contemporary Arab poetry. He was born on October 16, 1868, to a Kurdish father and a mother of Turkish-Circassian origin.

Shawqi became the Poet Laureate and close to Khedive Abbas Helmy, who took power after the death of his father Tawfiq.

His maternal grandmother worked as a maid in the palace of Khedive Ismail and was very wealthy, so she took care of his upbringing and he grew up with her in the palace.

At the age of four, he joined the Kuttab of Sheikh Saleh and during his early age, he devoted himself to memorizing and studying poetry.

At the age of fifteen, he attended law school and translation, and after graduating he travelled to France in 1887 at the expense of the Ottoman governor of Egypt, Khedive Tawfiq. He continued studying law in Montpellier and studied the masterpieces of French literature then returned to Egypt in 1891 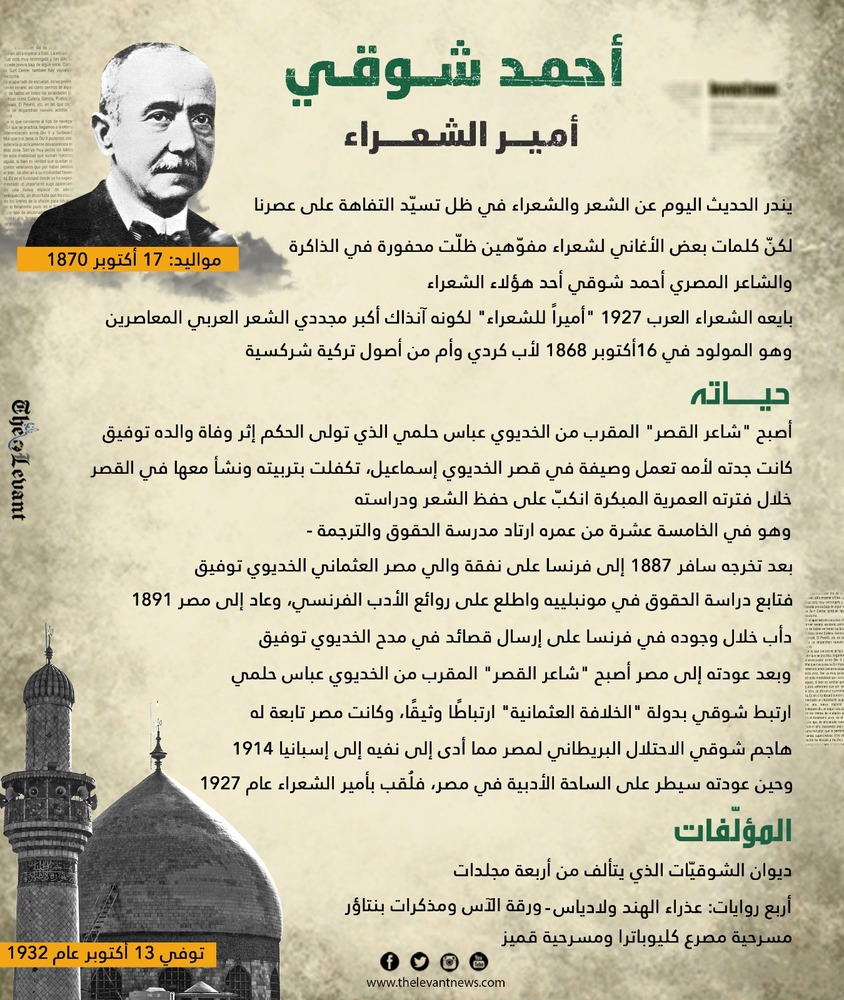 He also used to send praise poems to Khedive Tawfiq, during his stay in France. After he returned to Egypt he became the Poet Laureate.

Critics consider Shawqi supported Khedive for two reasons; the first one is that Khedive is his employer and took care of him since childhood. The second reason is out of religious belief and that is why he called all poets to defend the Ottoman Caliphate because it Islamic.

Shawqi attacked the British occupation of Egypt, which led to his exile to Spain in 1914. In exile, he studied Arabic literature and the Islamic civilization in Spain. He wrote many poems to pay tribute to Andalusia and wrote many nostalgic poems for his country, Egypt, to which he returned after spending four years in exile.

When he returned, he dominated the literary scene in Egypt, and Shawqi was known for his prolific poetic production, and his poetry was distinguished by his sublime words and ease of style. He was called the Prince of Poets in 1927.

Ahmed Shawqi has close relations with the singers of his time. He found in Mohamed Abdel Wahhab what he did not find in any other singer, so he took care of him, educated him, took him to Europe, guided him to the sources of arts and presented him to senior intellectuals and politicians.

Prominent singers sang his poems before Abdel Wahab did as Ahmed Antar Mostafa said in his book "the shawqiyyat of singing". Muhammad Othman sang a poem for Shawqi at a party in the suburb of Helwan, south of Cairo, on February 17, 1899. Sheikh Salama Hegazy composed for him the anthem of the Islamic Charitable Society and which is performed by the group of acting at the Khedive Opera in 1900.

He said about Umm Kulthum that if the voices were metals, Umm Kulthum's voice would be made of fine gold. She was impressed by Shawqi's poetry. Umm Kulthum sang nine Shawqi's poems composed by Riyad Al-Sunbati.

The number of Shawqi's poems which were sung is 47 in both standard and spoken Arabic. They were sung by Abdel Wahab and Umm. He wrote a song in the summer of 1931 in Lebanon and was sung by the singer Malak whose voice is very much loved by Ahmed.

As for the novels, the poet Ahmed Shawqi wrote four novels; "India Virgin" in 1897, "Ladias" which means the last pharaoh and "the Myrtle Leaf" which is a historical novel that took place in the time of the Persian King Shapur.

Ahmed Shawqi was considered the pioneer of Arab theatre, as he filled a void in contemporary literature, so he put together many poetic plays like Cleopatra's Death, Qambeez, Ali Bey al-Kabir and Mrs Huda whose events were inspired by contemporary social life.

On the evening of October 13, 1932, the poet Ahmed Shawqi passed away after a struggle with illness. Shawqi was diagnosed with atherosclerosis in his sixties and in 1930 he had another sudden illness that exhausted him and kept him in bed for four months. Despite his illness and weakness, his love for writing was strong and his poetic production increased. During that short period of illness, he wrote: Majnun Layla, Qambeez, Ali Bey al-Kabir, the stingy, and Mrs Huda. Shawqi's memory remained in people's minds and his poetry has immortalised him to this day.

Ahmed Shawqi The Prince of Poets thelevantnews His Life Egypt