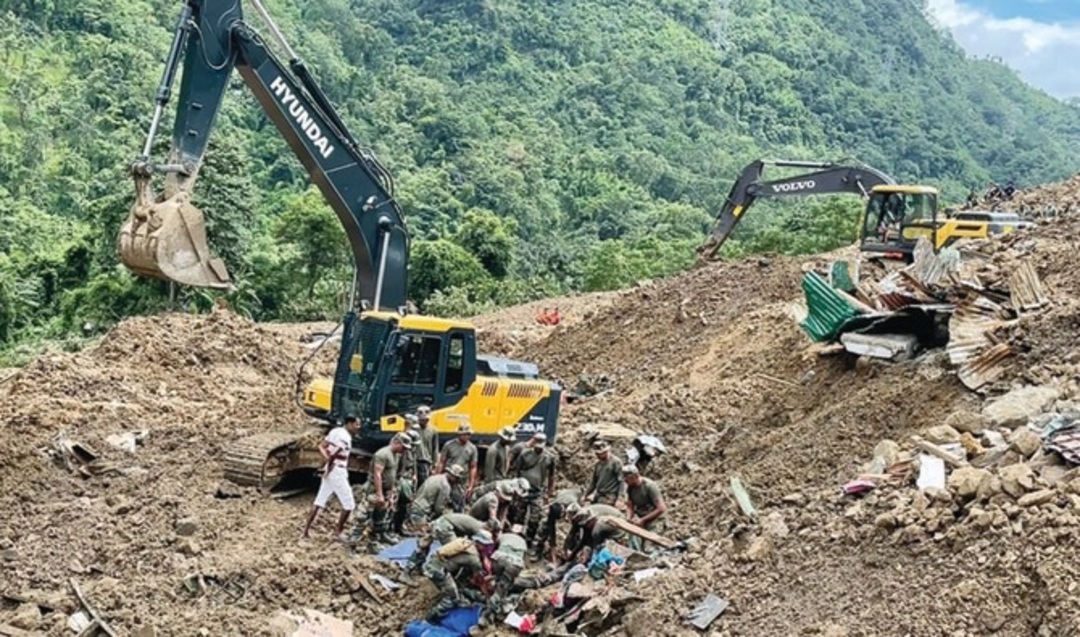 Security forces and disaster relief teams search for survivors and victims after a landslide in Noney district, some 50 km from Manipur’s capital Imphal. (AFP)

Indian authorities said that the death toll from a massive landslide in the country hit 37 on Sunday (July 3). Rescue teams battled teeming rain to search for 25 others still missing three days later.

A wall of mud and rock swamped a camp housing railway construction workers and members of the Territorial Army in remote Manipur state in the northeast after heavy rain early on Thursday (June 30).

Emergency teams rescued 18 survivors within the first few hours of the incident, the Arabnews reported, citing the AFP.

But army spokesperson Angom Bobin Singh said Sunday that 28 people were still missing before an announcement later that three more bodies had been retrieved.

Singh said that the fourth day of search operations was ongoing “despite adverse weather conditions” because of “heavy rains and fresh landslides.”

The death toll from the massive #landslide in #India's #Manipur state rose to 34, with more than 20 still missing, according to the state-run broadcaster All India Radio. #ManipurLandslide #Incident pic.twitter.com/UJaiJDOJH0

The remote northeast has generally poor road and railway infrastructure but India in the last few years has pushed ambitious infrastructure projects to match a Chinese buildup across the border.

The picturesque region — with mountains and dense forests — has been pummeled by heavy rainfall in recent weeks, triggering landslides and floods.

Dozens were killed in the area after flooding last month, with relentless rains causing landslides and inundating homes.

It should be noted that experts say climate change is increasing the number of extreme weather events around the world, with damming, deforestation and development projects in India exacerbating the human toll.

Countries that will not celebrate Eid al-Adha on July 9, 2022 Climate change: Six dead in glacier collapse in northern Italy