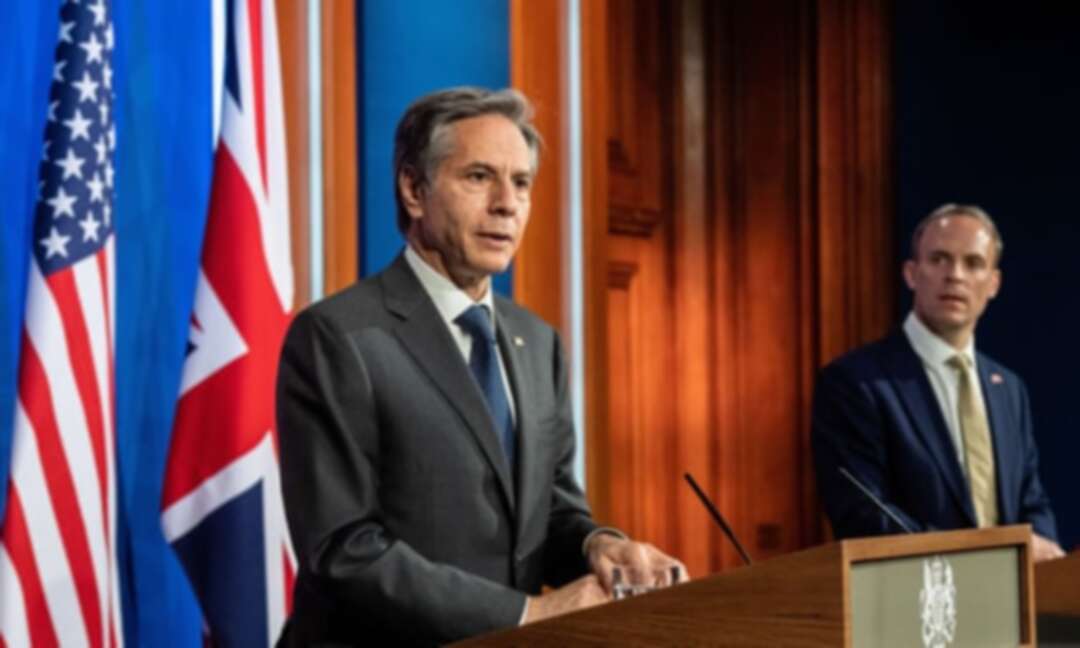 Antony Blinken, left, and Dominic Raab hold a press conference after their meeting in London on Monday.

Antony Blinken, the US secretary of state, and the UK foreign secretary, Dominic Raab, have called for a revitalised and broadened alliance of G7 nations determined to defend open societies and the rules-based order from the threats posed by the autocracies of China and Russia.

Speaking after a meeting in London on Monday, Raab said he saw “an increasing demand and need for an agile cluster of countries that share the same values and want to protect the multilateral system”.

He said the fact the UK had invited Australia, South Korea, India and South Africa to the G7 foreign ministers meeting in London was “a sign that we can see a shift to a pattern of like-minded countries working together”.

Raab said the door to diplomacy was always open with autocracies, but also warned the Russian president, Vladimir Putin, to end his “brinkmanship sabre-rattling on the border of Ukraine, the cyber-attacks and misinformation and the poisoning of Alexei Navalny, that was not just a human rights abuse but a use of chemical weapons on Russian soil”.

Blinken said it was “not the US purpose to contain China, or hold it down”, adding: “What we are trying to do is to uphold the international rules-based order, that our countries have invested so much in over so many decades to the benefit, I would argue not just of our own citizens but of people around the world, including, by the way, China.

“And when any country – China or otherwise – takes actions that challenge or undermine or seek to erode that rules-based order and not make good on the commitments that they’ve made to that order, we will stand up and defend the order.”

Ahead of his trip to the UK, Blinken accused China of repression at home and aggression abroad. But he told CBS 60 Minutes that a military conflict between the world’s two biggest economies does not serve either of their interests.

Raab said London and Washington see “eye-to-eye” on China’s challenge to their shared values. He also urged Beijing to step up to the plate and play its full role on issues such as climate change.

In remarks that underline how far the US has moved from the “America first” era of Donald Trump, Blinken said: “The challenge for us is to demonstrate that we can deliver for our citizens and when we are looking at most of the issues that are having an impact on their lives, whether it is this pandemic, climate change or the disruptive impact of new technologies, not a single one can be met by one country acting alone, not even the US.”

Wider G7 talks on Tuesday and Wednesday are likely to range over major international crises, but the unifying theme will probably be the defence of open societies, from Myanmar and Libya to Syria. Joe Biden has promised to stage a democracies summit, an event to which Raab made reference.

Blinken also hailed the “special relationship” between the two countries, saying that the US had “no closer ally, no closer partner”. He skirted around the chance to call out the UK for its recent cuts to its overseas aid budget, and avoided explicit criticism over how the UK has put the Good Friday agreement at risk with the Brexit deal.

Blinken also denied that the US had failed to consult its allies before the major foreign policy decision to withdraw US troops from Afghanistan by September – saying the decision had been endorsed unanimously at Nato.

He insisted the US was not cutting and running, saying: “We have made it absolutely clear that as we withdraw our forces from Afghanistan we will protect them and take decisive action in response to any attacks. We have also been clear our forces are drawing down, but we are not disengaging. We intend to be very active diplomatically in trying to advance a political settlement between the Afghan government and the Taliban.”

Both men denied there had been any progress in arranging the release of dual nationals detained in Iran but Blinken said: “We have to take a stand on the arbitrary detention for political purposes. I would hope that with time and effort countries should establish a norm that this practice is unacceptable.”

Keir Starmer plays down Labour hopes for 6 May elections Invest in green jobs in parts of Britain worst hit by pandemic, report urges