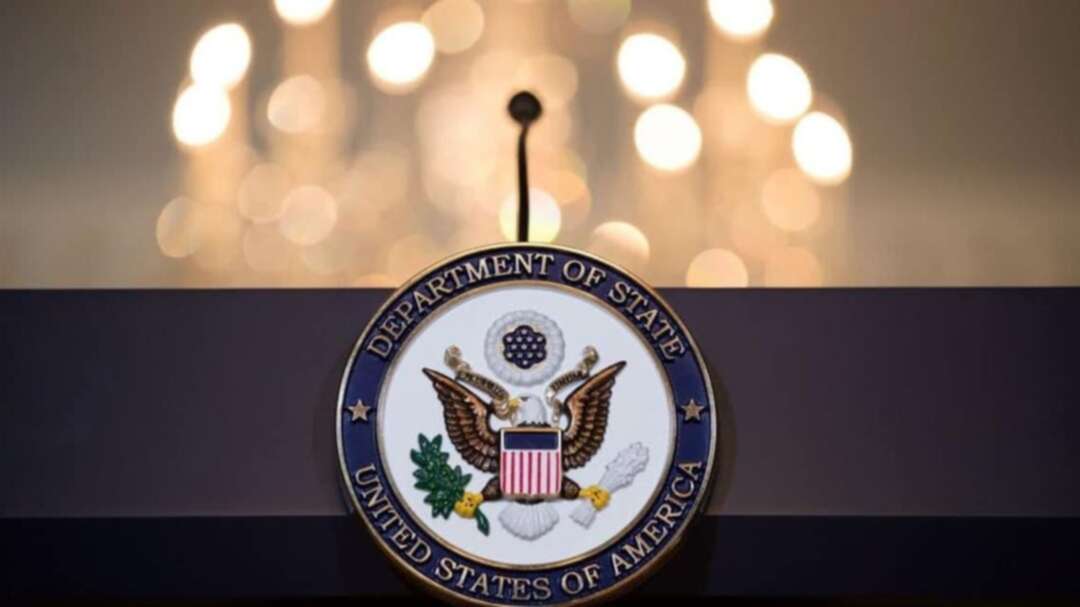 The logo of the US Department of State is seen on a podium. (File photo)

The United States State Department on Tuesday issued a statement saying it was concerned about the sentencing of a Saudi Arabian citizen known to be an ISIS sympathizer, referring to him as an “aid worker.”

“We are concerned by reports that a Saudi counterterrorism court sentenced Saudi aid worker Abdulrahman al-Sadhan to 20 years in prison followed by a 20-year travel ban,” a statement by Ned Price, US State Department spokesperson read.

Dozens of people on social media, including two Saudi royals, pointed out that al-Sadhan is an ISIS sympathizer and not an aid worker.

Tweets belonging to al-Sadhan under the Twitter handle (@Sama7ti) showed that he is an avid supporter of the extremist group and often called for attacks on Saudi Arabia and other countries by ISIS.

“The participation of Saudi Arabia, Jordan, and others in the airstrike against ISIS gives the state

“When do you intend to come to Saudi Arabia? We have a lot

Referring to ISIS fighters as “mujahideen,” al-Sadhan also expressed excitement at the possibility of the terrorist group “liberating” the region.

“Iraq has the most and the largest camps in the region with billions of equipment, most of which fell into the hands of the mujahideen… It is sufficient enough to liberate the entire Arab region. Allah is the greatest,” he tweeted in 2014.

Prince Talal al-Faisal also shared tweets by al-Sadhan in which the latter called for ISIS and others to launch attacks on countries in the Middle East to publish the personal information of Saudi Arabian security personnel.

“Actions have consequences. This supposed “aid worker” called for the publishing of the personal information (phone number/address/license plate number) of security personnel, which ultimately led to the killing of Col. Kitab Al Hammadi,” al-Faisal said.

Saudi Prince Abdulrahman bin Mosaad said that if the Kingdom does not crackdown on “the likes of al-Sadhan,” it would be enabling hundreds of ISIS sympathizers to spew violence and possibly carry out terrorist attacks in the region.

“Abdulrahman al-Sadhan, who writes on Twitter under the name Sama7ti has tweets that explicitly support ISIS, adopts its ideology and promotes it,” bin Mosaad said.

He also called out US hypocrisy, stating that Washington would hold Saudi Arabia accountable if al-Sadhan had carried out terrorist attacks, but has condemned the Kingdom for issuing a court judgement against him.

“If we released the likes of al-Sadhan, we would be supporting ISIS, and if a court judgement is made against him, we have breached human rights!!” he wrote on Twitter.

Last month, a Pentagon official said that Saudi Arabia is a key partner in the fight against terrorism and in ensuring regional stability.

“Saudi Arabia is a pillar of regional security architecture, and they’re a core stakeholder in the threat against terrorism and countering Iran’s destabilizing activities,” Pentagon Press Secretary John Kirby said in response to a question from Al Arabiya at the Pentagon.

The Kingdom’s Global Center for Combating Extremist Ideology (Etidal) and the United Nations Counter-Terrorism Center (UNCCT) signed a memorandum of understanding (MoU) last week to “strengthen cooperation in preventing and countering terrorism and violent extremism as and when conducive to terrorism.”

Etidal was established in 2017 in the Saudi capital Riyadh with the aim of working to confront the phenomenon of extremist ideology. It works to raise awareness and promote a culture of moderation, tolerance and coexistence, and to support international efforts to achieve this.