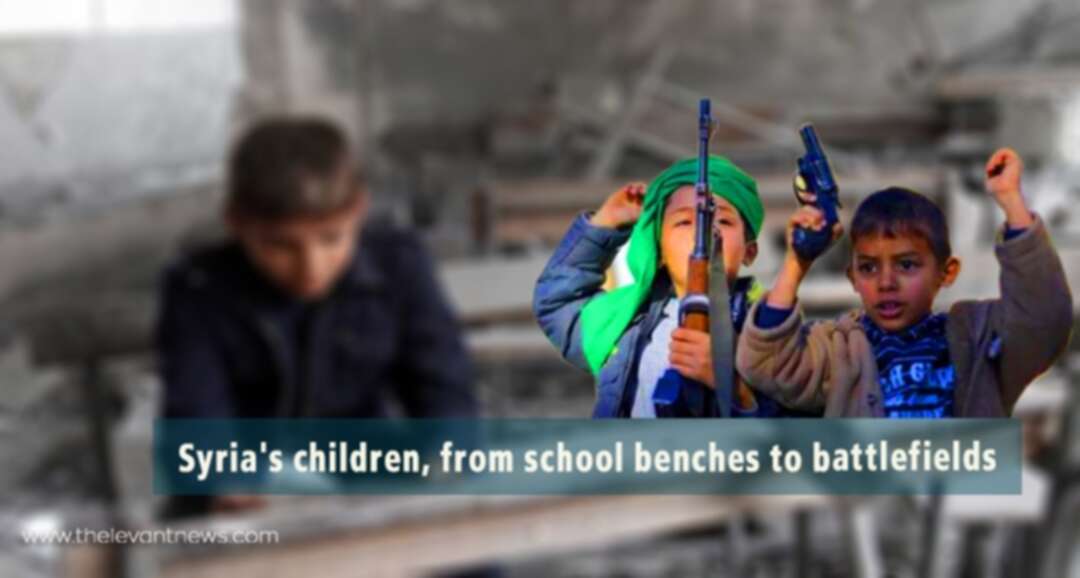 The war occurs and grinds everything that stands before it, so that the masters of these wars enjoy their gains, while the innocent pay their large bill. Syria's children

The bill, the most significant and most expensive, remains the responsibility of the children of wars, who grew up in harsh conditions.

More than 415 million children live under the weight of wars, and this alarming figure is equivalent to one-sixth of children in 2018, according to the report, "The War Against Children," published on February 13, 2020.

According to the studies, the ten countries most threatening the physical and psychological lives of children are Afghanistan, Congo, Iraq, Yemen, Mali, Nigeria, Somalia, South Sudan, Central African Republic, and certainly Syria.

Impact of wars on children in Syria:

Save the Children reported that the war had had profound psychological effects on children, and increased suicide rates, the most recent of which is the suicide of "Wael Al-Saud" due to bullying and racism in Turkey. Syria's children

And many cases of escape from home, deviation and depression as a result of changing their lives, and their lack of connection In the surrounding environment, this is what happens and happens in many cases of asylum.

While studies of European countries present their reports on the negative impact of watching violent films, the children of Syria experience these scenes in a shocking reality and see their results, and are even exposed to psychological and physical damage directly.

Children and adolescents became more hostile and inclined to verbal and physical violence. The conflicted parties in Syria have taken advantage of the psychological void that exists among children as a result of the loss of the family or the mental conditions in which they have fallen, and they recruited them and washed their brains instead of helping them, to turn them into small tools that serve their goals and agendas, without caring about their childhood. Syria's children

The Syrian regime and the recruitment of children:

The regime, as has been the practice since the Ba'ath rule, exploited children, by taking them out of their classrooms to the street in supportive marches, transforming them into numbers in a totalitarian, oppressive and oppressive system, wiping out their small entities and incorporating them into the hateful regime's forms, and with the escalation of the revolution in 2014, It has become more than a party habit to become a systematic organization, as high school students are subjected to special training camps, where they are trained to take up arms. Eyewitnesses from Homs mentioned the presence of a camp near the Homs Refinery, in addition to the sports facility in the Wadi Dahab neighborhood in which adolescents are trained, some of whom have joined the ranks of the Civil Defense Army, and are standing at checkpoints to protect the Alawite majority neighborhoods in the city.

The regime allowed the Revolutionary Guards to exploit and recruit children as is happening in Damascus and Deir Al-Zour, under the guise of registering them in the scouts and working to instill the ideology of the Revolutionary Guards in their minds and graduate them knowing all martial arts. When the scouts reach 16 years old, they become fighters in the regime's militias or the Iranian Guards and their militias, in an effort to clone Hezbollah’s movement in Syria.

And in Hama, the Syrian regime has worked to provide temptations for teenagers from school students, intending to bring them to its side, especially in light of the many losses that the regime is experiencing on various fronts.

He granted each volunteer student a security card that carries features inside the city, exempt him from school permanence, and an increase of 15 degrees, in addition to his cumulative grades in the General Secondary Certificate. The sources state that the first responsible for the teenage recruitment process is Osama bin Amin Al-Asfar.

The Syrian human rights defender, Abd al-Fattah Qassem, indicates that the regime built the structure of the National Defense Forces to accept all those who volunteered, and intentionally took those under the age of 18, sending many of them to receive specialized training in "ideological" fighting in Iran, and then returned to join the arenas Fighting. Syria's children

When we talk about the recruitment of underage children, without consent or even asking their parents, we must mention the terrorist organization ISIS, who were recruiting all children who can carry weapons, even with difficulty, to become mujahideen for the sake of the Islamic State.

They intentionally pulled the boys out of the arms of their families in every village they occupied and put them in closed camps to train them to kill and execute and to implement the thoughts of suicide jihadists in their minds. AS they did with the al-Quwaidar clan, naming them the caliph cubs, putting them in camps called cubs training and pushing them to participate in fights, sometimes detonating themselves.

The number of children affiliated with ISIS was documented in 2015 with only 1,200 children.

The organization used children in executions against what it calls apostates or infidels, and a number of them appeared in publications dedicated to children shooting and carrying out executions in unprecedented brutal media propaganda.

ISIS has worked to enter the camps for the displaced and refugees and exploit ignorance and poverty, or the presence of children without the company of their relatives, as they have become an easy target for ISIS.

ISIS took advantage of the neglect of Western and Arab countries and the humanitarian actors of the displaced and presented itself as a savior, and started sowing hatred in their minds. It should be noted that the tools of temptations of the organization in Syria are arms and power, and, in the camps, they are food and material support.

After the collapse of the organization in Iraq and Syria, many countries are working to save these child victims, such as Russia, which has declared the return of 50 children of Russian nationality.

Human Rights Watch published a report on the recruitment of child exploitation to fight in the ranks of the Kurdish People's Protection Units, and according to the report, in 2017 alone, there were 224 child recruitment cases, and girls were not excluded, noting that there were 72 girls under the age of 18.

In 2019, the United Nations signed with SDF forces a plan of action to abandon the recruitment of minors, and this signature sparked a wave of mockery, criticism, and skepticism about SDF’s intentions to abandon children who were forcibly recruited. Among them is the Kurdish journalist, Sherzan Allo, whose 15-year-old cousin was kidnapped and forcibly recruited by the Syrian Democratic Forces. Syria's children

As Sherzan Allo posted on social media "in my name and the name of the family, we ask you and the United Nations that believe your lies, to return our minor child and the rest of the children to their homes and schools, to prove to the people that you have stopped child recruitment, treachery, and betrayal."

The units win over the children by creating gatherings called "communes," the first of which was established in Afrin in 2017, and affiliation with the commune and learning about the principles of the party is the first step for children to bear arms, where they are taught with extreme ideas of another kind, such as "revenge is the path of freedom" and "we fight the world for the sake of our leader."

The party also used special groups, which communicate with children via Facebook and other social media, as happened with the child “Oweesh Buzan” in the city of Kobani, where she was recruited to the Women’s Protection Forces, at the age of 17 years, and was persuaded to join the forces through the messages on Facebook.

Since the beginning of the Syrian armed revolution, Human Rights Watch has documented the practices of opposition factions by exploiting children under the age of 18 and placing them in combat or support roles for hostilities.

The first recruitment incidents were documented in 2012, when boys, about fourteen years old, were found to assist the Free Syrian Army in some combat operations. They joined the ranks of the opposition for many reasons, some of whom joined their relatives or friends or lived in areas where there was fighting, and education was absent, so they engaged in battles, or suffered personally or a member of their family suffered from the arrest or brutality of the Syrian regime.

Children of Syria are victims of an entire world

There are no accurate statistics on the numbers of children recruited by the various factions in conflict, while their conscription is a war crime. All parties are condemned for this crime without exception, even if they appear more intensively in the ranks of one side than the others.

These children are victims of all the warring parties on our land, and behind them are their supporters from the countries that drowned them in this war, and inundated with them the most basic of their rights and dreams of safe living, learning and even playing.

They became the fuel of the war in Syria and the victim of poverty, lack of education, and extreme poverty in neighboring countries of asylum, such as Turkey, Lebanon, and Jordan. This suffering resulted in an almost endless war.

It remains to say that these children, the victim of the raging Syrian war, who have died, and for whom the war has left scars that will not heal and painful memories of the bombing of planes, cannons and barrel bombs, and the remains of family and comrades of childhood scattered here and there or buried under the rubble, are victims of all international organizations,

Claiming to protect childhood without taking any serious action, organizations have limited themselves to denunciations and photographs on Internet pages.