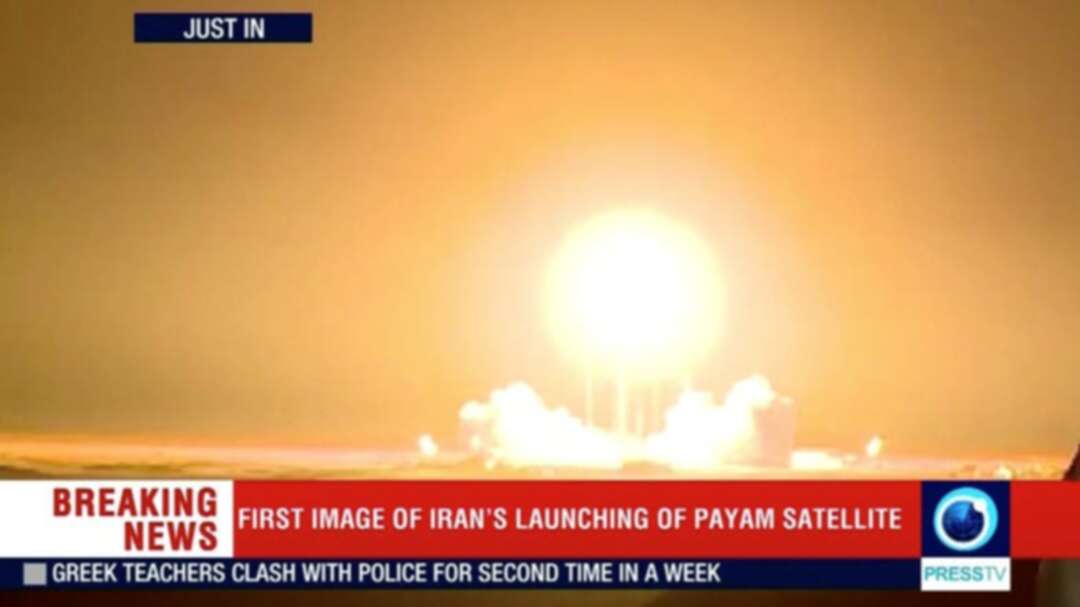 The Payam satellite is launched in Iran, January 15, 2019, in this still image taken from video. (Reuters)

Iranian officials and satellite images suggest the Islamic Republic is preparing to launch a satellite into space after three major failures last year, the latest for a program which the US claims helps Tehran advance its ballistic missile program.

Satellite images from San Francisco-based Planet Labs Inc. that have been annotated by experts at the Middlebury Institute of International Studies show work at a launch pad at the Imam Khomeini Spaceport in Iran’s Semnan province.

The photos also show more cars and activity at a facility at the spaceport, some 230 kilometers (145 miles) southeast of Iran’s capital, Tehran. Such activity in the past has signaled a launch looms.

The increased activity corresponds to an uptick in reports in state and semiofficial media in Iran about launches coming amid celebrations marking the days before the nation celebrates the 41st anniversary of its 1979 Islamic Revolution. Iran routinely unveils technological achievements for its armed forces, its space program, and its nuclear efforts during this time.

Mohammad Javad Azari Jahromi, Iran’s information, and communications technology minister and a possible contender in the country’s 2021 presidential election, also increasingly has been tweeting about the country’s satellite program.

An earlier report by Iran’s state-run IRNA news agency quoted Jahromi as saying Tehran planned to launch six satellites into orbit this year, including the Zafar 1 and 2. IRNA described the Zafar 1 and 2 as communication satellites aimed at “broadcasting a single message to all users, establishing one-way voice communication between two users and sending a message to 256 direct users.”

The apparent preparations for a rocket launch come after two failed launches of the Payam and Doosti satellites last year, as well as a launchpad rocket explosion in August. A separate fire at the Imam Khomeini Space Center in February 2019 also killed three researchers, authorities said at the time.

The satellite failure in August drew even the attention of President Donald Trump, who later tweeted what appeared to be a classified surveillance image of the launch failure. The three failures in a row raised suspicion of outside interference in Iran’s program, something Trump touched on in his tweet.

“The United States of America was not involved in the catastrophic accident during final launch preparations for the Safir SLV Launch at Semnan Launch Site One in Iran,” Trump wrote, identifying the rocket used. “I wish Iran best wishes and good luck in determining what happened at Site One.”

The US alleges such satellite launches defy a U.N. Security Council resolution calling on Iran to undertake no activity related to ballistic missiles capable of delivering nuclear weapons.

Iran, which long has said it does not seek nuclear weapons, maintains its satellite launches and rocket tests do not have a military component. Tehran also says it hasn’t violated the U.N. resolution as it only “called upon” Tehran not to conduct such tests.

Over the past decade, Iran has sent several short-lived satellites into orbit and in 2013 launched a monkey into space.

The launch comes amid heightened tensions between Iran and the US since Trump unilaterally withdrew America from Tehran’s 2015 nuclear deal with world powers in May 2018. Iran since has begun breaking terms of the deal limiting its enrichment of uranium.

Meanwhile, a series of attacks across the Persian Gulf culminated with a US drone strike in Baghdad killing Revolutionary Guard

Gen. Qassem Soleimani and a retaliatory ballistic missile strike by Iran on Iraqi bases housing American troops earlier this month. Iran also accidentally shot down a Ukrainian commercial airliner taking off from Tehran amid the tensions, killing all 176 people on board.

Taliban kill 11 in Afghan police base attack Iran’s IRGC commander: No US commander will be safe if Iranians are threatened